Posted By Leonid Melikhov | On 06th, Jun. 2013 Under News | Follow This Author @Rengarious 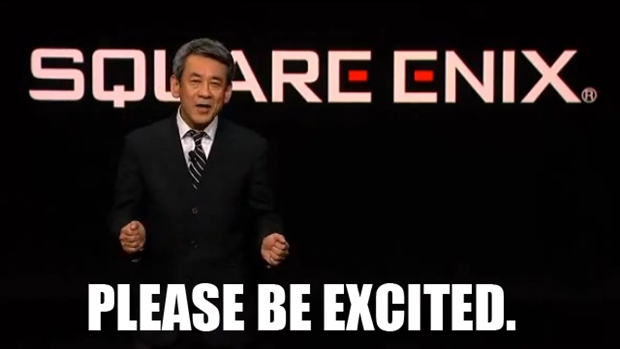 Square-Enix will be holding a separate Final Fantasy conference on Tuesday, June 11th 9 AM – 10 AM to talk about the future of the Final Fantasy franchise. When PlayStation 4 was announced back in February, Shinji Hashimoto promised to reveal a new Final Fantasy game at E3.

Our logical thinking at GamingBolt suggest that the Final Fantasy event is where the major announcements will be happening rather than Sony’s E3 press conference.

Rumors have been floating around that there is a whole new Final Fantasy in the works for the next-generation platforms, and also that Final Fantasy Versus XIII still exists and will make an appearance sometime soon.

What better time than E3 2013 for all these Final Fantasy reveals? Here is a hope that we will be hearing and seeing some new exciting stuff from Square-Enix next week.

Take a guess at the announcements in the comments section below.

Check back on GamingBolt in the coming days and next week for our full E3 coverage.