Posted By Rashid Sayed | On 27th, Sep. 2010 Under News | Follow This Author @GamingBoltTweet 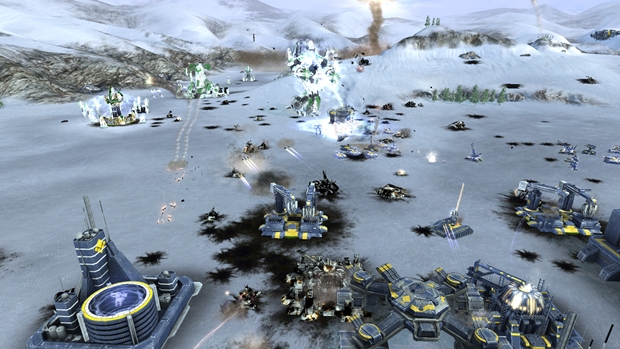 Square Enix announced today that downloadable content for SUPREME COMMANDER 2 is now available for PC and for the Xbox 360.

PC Units include:
·        Cybran Monkeylord: Experimental Spider Bot: The beloved SUPREME COMMANDER experimental makes its return with a legged creature that features a powerful laser mounted on top of the body. If this unit makes it to your base, you’re already dead.
·         UEF Aegis: Experimental Shield Generator: A large bubble shield that covers an entire base. The shield has high health, but if knocked down it has to be manually recharged at a high energy cost.
·         UEF Super Triton: Experimental Dreadnought: This ultra-battleship is bristling with humongous cannons but is only able to fire a medium distance, unlike the regular Battleship which has a long range. These weapons do extreme damage, but having to get close enough to use them is its weakness.
·         UEF Jackhammer: Experimental Assault Artillery: This hulking, direct fire ‘cannon on wheels’ drives up to an enemy base and must unpack before firing. Once it unpacks it gains advanced defense (like hunker) reducing damage taken and allowing it to fire. The primary cannon has a slow rate of fire, with a long charge up, but does incredible damage (potentially knocking down multiple shields with a single shot)
·         UEF Field Engineer: Mobile Repair and Support Unit: The UEF Mobile Repair and Support unit is a mobile engineer that has a basic direct fire turret as well as a repair arm. It is unable to build new structures, reclaim or capture, so its strength lies in its ability to accompany and quickly repair nearby allied units.
·         UEF Research Converter: Research Conversion Facility: This structure provides the option to generate Research directly from accumulated mass. It is highly inefficient, but produces an instant boost to research.
·         Illuminate Sooprizer: Experimental Gunship: The Illuminate Mega-Gunship offers a devastating direct-fire alternative to the Darkenoid. It does not have any anti-air capabilities focusing on ground based damage and increased survivability against surface threats.
·         Illuminate Illuminator: Experimental Intel Gathering Station: The Overhorizon Radar provides flawless Vision and Radar in a huge radius. However, it has a tremendous energy cost to activate, and a long cooldown period.
·         Illuminate Buhbledow: Experimental Shield Destroyer: The Shield Smasher is a ballistic EMP missile designed to knock down all enemy shields in a wide area. It has a long enough range that it can cover most of the map. The blast does insignificant damage to structures and units.
·         Illuminate Shotja: Sniper Bot: The sniper unit is a medium ranged, mobile hover unit. It has a single, high damage shot with a long cooldown. Its weakness is its low rate of fire and slow movement speed.
·         Cybran Recycler: Mass Reclaimer: Similar to the Loyalty Gun, the Mass Reclaimer has a medium range and automatically reclaims nearby wreckage. It is unable to reclaim living units, however.
·         Cybran Cicada: Experimental Cloak Generator: The Cicada is a mobile mini-experimental that, when activated, hides all units nearby from both vision and radar. This makes the units completely invisible to an opponent. The Cicada has a high energy cost which lasts for less than a minute before recharging. The complex unit lacks only the ability to cloak itself while in operation.
·         Cybran Intellitron: Air Scout: Lightly armored and unarmed, but with advanced vision and radar. Allows for quickly scouting remote areas of the map. Very fast to outrun anti-air.
·         Cybran Boomerang: Nuclear Missile Defense: This structure is placed in a base to defend against nukes. When incoming nukes get in range, they are reprogrammed and sent back to their origin. It has a low rate of fire and can be overwhelmed. Redirected nukes spoof enemy Anti-Nukes, making this a deadly structure to overlook when scouting for Nuke targets.

Research Boosts/Upgrades (PC)
Research is focused on diversifying the factions while maintaining each faction’s identity.

WHEN/WHERE: The SUPREME COMMANDER 2 Infinite War Battle Pack is now available in Pal regions for €9.99 / £6.99 via STEAM and for 800 Microsoft Points on Xbox LIVE.