Apex Legends Mobile Confirmed to Launch on May 17th

New cinematic trailer sees Mirage finally getting a big win over Wraith. A new challenger is also teased to be joining the roster.

Apex Legends Mobile is Targeting a Full Launch This Summer

Apex Legends Mobile launched in select regions earlier this month, and Respawn Entertainment says it's currently aiming for a full launch this summer. 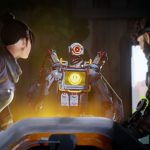