With all the First-Person Shooters out there, it becomes harder and harder to create one that can top the previous one.  Hell, it's hard just to make a shooter that is enjoyable with all the competit... Read More

Homefront Video Guide with tips, hints, guide, and walkthrough of each level for PC/Xbox 360/PS3 versions of the game. ***This walkthrough was not uploaded by GamingBolt.com. The walkthrough w... Read More

Homefront launch trailer is a go

[HTML1] THQ have just released the launch trailer for next week's release of Homefront. The FPS is set for a March 18th release (in the UK) for 360, PS3 and PC. It offers little over what we've ... Read More

The "battle code" required to play Homefront's online modes has been released a week ahead of the main game on the PSN and Xbox Live. New copies of the game will have a one time code that will allow... Read More

[HTML1] A new trailer from THQ shows off some multiplayer from their upcoming FPS Homefront. THQ core games boss, Danny Bilson, has praised the game saying that "Homefront is set to become one o... Read More

With all these games releasing live action short films and trailers, Homefront is no exception.  Though this latest trailer for the game just starts off with some live action and then delves right ... Read More 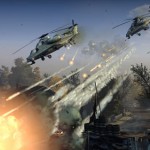 Didn't own Metro 2033 yet? Then don't buy it. Get Homefront instead. Yes, if you're a PC gamer, then THQ's throwing at you an offer that's pretty hard to refuse. They're giving anyone who pre-... Read More

Kaos's upcoming shooter, Homefront got a new trailer today. Showcasing the resistance starting to build up against the North Korean invasion, the footage contains some impressive sequences. Th... Read More

Homefront soon launches on Steam for PC, and Kaos Studios have recently unveiled a series of new features specific to the PC port of their upcoming FPS. Supposedly all vehicle controls will be... Read More

Xbox 360 Gets Exclusive Map for Homefront

There was a New your City showcase on Homefront today that revealed that the Xbox 360 will be getting an exclusive multiplayer map for DLC called 'Suburb'.  There are no other details on that were ... Read More

[HTML1] THQ has released the third developer diary video of their upcoming Kaos developed First Person Shooter, Homefront, explaining what the consequences of war and violence can be. The video show... Read More

[HTML1] Here is the latest trailer for Homefront which shows a brutal existence with a hope for freedom being the only chance to change things as Korea invades the US.  The game's story comes from t... Read More

[HTML1] Homefront will have 32 online versus and dedicated servers on all platforms providing a massive online experience.  Can't wait to check out when it is released March 8th, 2011 for the PC, Xb... Read More

[HTML1] The first  Dev Diary for THQ's upcoming FPS, Homefront, is now out. This diary features staff from Kaos explaining the back story for the game. Check out the video above.Read More

Homefront’s launch to be accompanied by John Milius’s Novel

THQ have announced that their upcoming first person shooter Homefront will be accompanied by a novel based on the game. The novel will be written by John Milius of Red Dawn and Oscar Award-winning A... Read More

[HTML1] Here is what the 32 online multiplayer will look like in THQ's Homefront.  It looks pretty and intense and you can control everything you see from the drones to the helicopters.  The game i... Read More

Jon Rooke, THQ's head of marketting, says their upcoming First Person Shooter, Homefront, will not be able to defeat Call of Duty and replace it as the genre's definitive title. He says trying to m... Read More