Aragami 2 – 14 Features You Need To Know

Taking place 100 years after the original, the sequel sees players fighting against the Akatsuchi Empire to free their fellow Aragami. 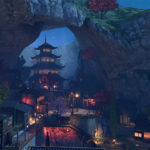