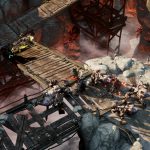 Next gen hardware's specs are looking very impressive, as per Ricardo Seligmann of Novarama.

Novarama's Ricardo Seligmann talks about the exciting potential of SSDs in next gen hardware.

If you buy a PS Vita, you will receive some AR cards in the box. It's pretty much unmissable. They're can for this game called Reality Fighters. If you own a Nintendo 3DS, then you already know how ... Read More