Other issues such as analog movement and several bugs will also be addressed.

The developers also discussed the feedback received for the Sanhok map.

The test server will be up until July 16 and will allow the developers to identify and fix any issues with the new content and changes.

Xbox One players will be able to play PUBG's War Mode very soon.

It's not a zero sum game after all.

Every Multiplayer Shooter Will Have Battle Royale Modes Within A Year, According to Ex-Ubisoft Developer

That's a controversial opinion right there.

The hunter becomes the hunted.

Other issues have also been addressed. 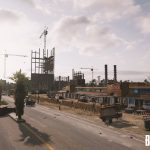