The Simpsons Arcade Game is Getting an Arcade 1up Release

It will be the first time The Simpsons arcade game is available since the game was re-released on Xbox 360 and PS3 in 2012. 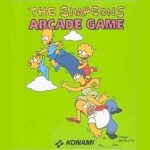 Konami have announced that The Simpsons Arcade Game is now available for Xbox Live. "Konami is dedicated to reviving retro titles that gamers have grown to love, and it doesn't get any better t... Read More

That's right ladies & gentlemen; Konami's pocket money guzzler (from a time when The Simpsons could do no wrong) may be making its way to home consoles soon. The Australian classification board ha... Read More