Yes, this is actually a thing now. 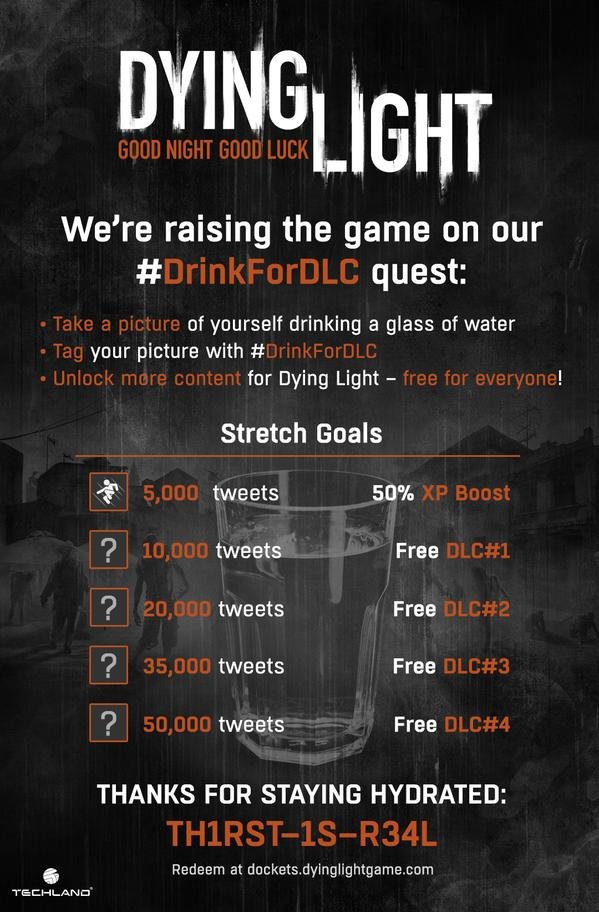 Yesterday we reported that Techland, the developers of Dying Light, had, in response to Destiny making one of its missions exclusive to Red Bull drinkers (seriously), had humorously posted a tweet in response announcing a ‘partnership with water;’ today, it seems like they will actually make the joke a reality- yesterday, Dying Light playfully encouraged people to drink water in exchange for a free docket code that gives players a high-tier weapon to redeem in-game. The response has apparently been positive enough that they are going through with this.

Today, Techland have announced an extension to the #DrinkForDLC campaign. Techland have decided to release a number of all new DLC packs for Dying Light throughout the second half of the year- for absolutely free. The campaign will be led by the fans reaching successive stretch goals, by posting pictures of themselves drinking water on Twitter and tagging them with #DrinkForDLC.

All in all, I think this is amazing, and also a jab at Destiny and Bungie that is more than well deserved. In case you are interested in actually participating in something like this – which may yet shame the industry to fix its DLC practices before it is too late – you can peruse the stretch goals for the campaign in the image above.