Tetris is one of the most recognizable and foundational pieces of gaming’s history. Over time, some have tried to rework its formula, but the gameplay at the core of Tetris is timeless, representing the simple, yet increasingly challenging form of interactivity that makes gaming a unique medium. 2018’s Tetris Effect understood what makes the original so great and built around it to improve the experience but leave the core unchanged, and Tetris Effect: Connected improves the formula even further by implementing new multiplayer modes and enhancing the already beautiful visuals to utilize the Xbox Series X. Some difficulty spikes aside, Tetris Effect: Connected emphasizes the never-ending enjoyability of Tetris’s gameplay and includes every classic mode a Tetris experience should offer, and its mesmerizing implementation of music and visuals makes it the best core Tetris package on the market.

An upgraded version of 2018’s release, Connected contains all of the single player modes from the original, mostly unchanged. The primary, and likely first, that you’ll experience is the Journey Mode, which acts as the effective campaign. In this mode, you work your way through more than two dozen stages combined into a handful of four or five stage bundles that you play in sequence. Within each of the sequential stages, you need to clear a certain number of lines, which changes based on the difficulty setting, and between stages, the pieces you’ve already placed stay put, though if you fail, you can restart the stage you were on from scratch. Naturally, stages begin relatively easy and increase in difficulty, usually fairly, but there are a handful of times where the difficulty spikes become too much to handle. The drop speed of tetriminos can increase with almost no warning, especially when you’re focused on the board to figure out your next moves, and getting hit with an unannounced major spike in drop speed feels jarring and unfair. Luckily this only happens in the latter stages on normal difficulty and intermittently on expert, but when it does, it feels like an unavoidable setback.

"2018’s Tetris Effect understood what makes the original so great and built around it to improve the experience but leave the core unchanged, and Tetris Effect: Connected improves the formula even further by implementing new multiplayer modes and enhancing the already beautiful visuals to utilize the Xbox Series X."

The only adjustment to the core Tetris gameplay is the addition of the zone mechanic, through which you can slow down the drop speed of each piece and, if you’ve planned well enough, clear more than the traditional four lines at a time. This mechanic is almost akin to Guitar Hero’s Star Power, working to either help boost your high score or lend a helping hand when you’re about to fail. It’s easy to forget about when you’re in the zone, but if you’ve built up enough of a zone meter, it can be a secret weapon against those spikes in speeds. Plus, the stages react beautifully to going into the zone, and if you clear enough lines, it turns to a satisfying negative filter, making you feel like you’ve utilized it correctly. It’s the type of mechanic that can be completely ignored if you want the pure Tetris experience but only serves to help those who want or need it, and I found it a welcome addition to the formula.

The other modes transferred from the original are the Effect Modes, consisting of a variety of modified ways to play the base game. These include traditional quick play and Chill Marathon modes, more intense high-score and high-speed modes, and others with unique challenges such as clearing infected blocks, dealing with occasional I-tetriminos randomly falling onto the board, and the most fun Mystery mode, which pits you against a surprisingly large number of different factors like turning the board upside down or throwing in a bomb that needs to be defused. These are just more ways to play the game with a few twists, and, while they’re not necessarily breaking any ground, they’re great pieces to have for the longevity of Tetris in this particular package.

The primary addition to Connected is a slew of competitive or cooperative multiplayer modes. The most interesting of these is the Connected mode, which teams three real players up to go against a series of AI-controlled bosses. For the most part, this is a variation on three players playing their own game, but occasionally the three boards are combined and the three players are invited to clear even longer lines that make the boss’s board more difficult, similar to how it’s done in Tetris 99. The calculus for a handful of the mode’s features is never clearly explained, but the ability to combine boards and take down a common enemy, Tetris-style, never gets old. The other multiplayer modes are classic one-on-one modes that are fun in their own right, one of which includes the zone mechanic from Journey Mode. These are more features that don’t try to shake up the formula but are classic elements of the game that should be there for any Tetris experience and are fun to jump into as a shake-up from the single-player. 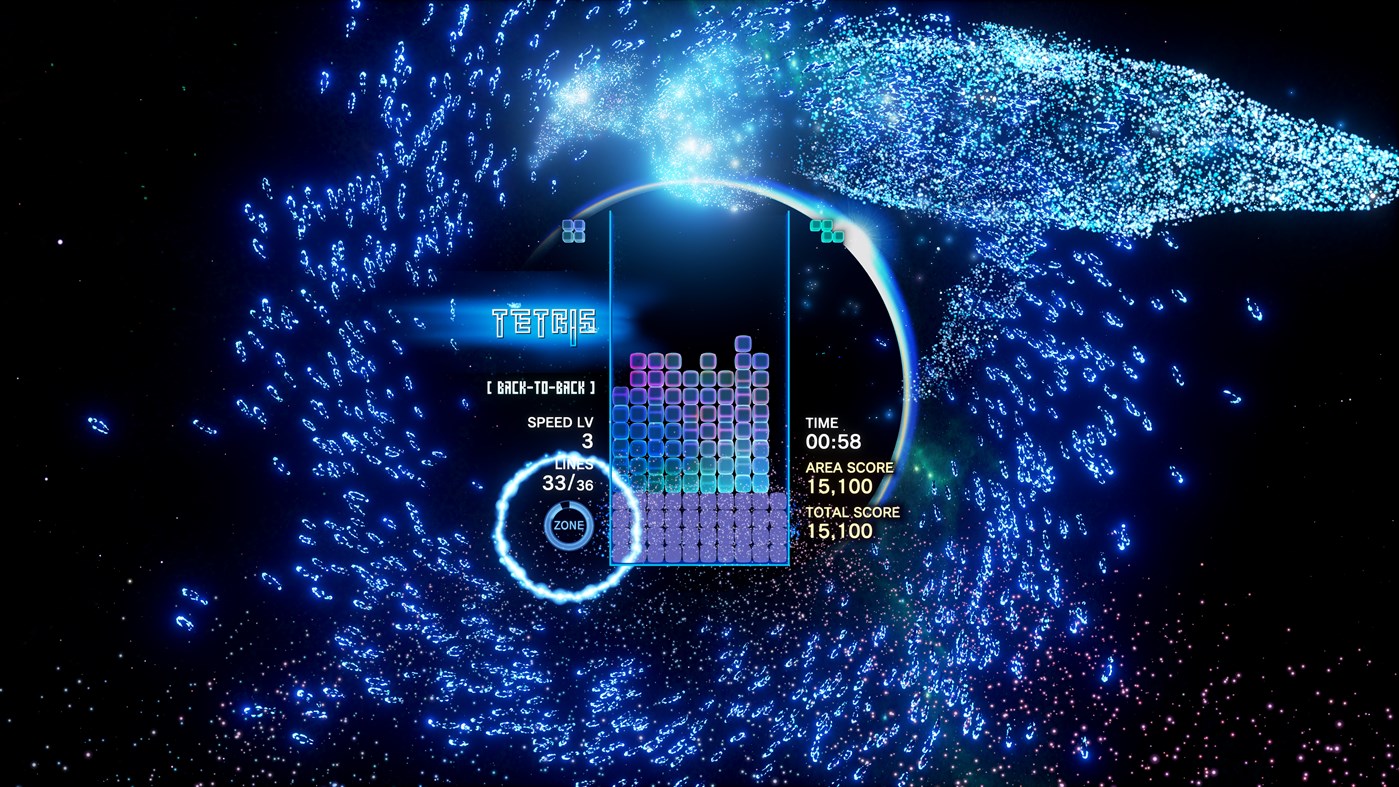 "What truly differentiates Tetris Effect from any other Tetris game is the unparalleled presentation that turns such a simple game into a transcendental experience."

What truly differentiates Tetris Effect from any other Tetris game is the unparalleled presentation that turns such a simple game into a transcendental experience. Each primary stage has its own unique theme, ranging from the darkness of space to the hustle and bustle of a city skyline and everything in between. Every stage has a gorgeous set of visuals that plays out around and behind the game board, each of which is almost mesmerizing enough to distract you from the game you’re supposed to be playing. Even more impressive is how the visuals react to your progression through the stage. Most stages begin relatively quaint and cold, but as you clear lines and make big moves, the visuals start to open up, getting warmer and more vibrant.

Take the stage that sees you climbing a mountain. Your initial view is cold, looking up at the long path ahead, but as you progress, you move your way up the path until the end, when you’ve cleared enough lines, you reach the summit and see the beautiful orange sunset covering the snow. While some stages are more impactful than others, each is still uniquely gorgeous. Though it might not push the boundaries of the Xbox Series X with character models or draw distance, it’s instantly mesmerizing to see the array of colors that fly around in the form of countless particles that could not have been rendered this beautifully on past consoles.

Complementing the visuals for every theme is the equally mesmerizing music that not only sets an undeniable tone for each stage but also interplays with the gameplay just as much as the visuals themselves. The music, too, starts soft but slowly builds to a triumphant climax as you reach the latter stages of each level, and it even reacts when you clear a line or rotate a piece. The combination of the music and visuals culminates in one of the most satisfying feelings as you progress, with particular moments like reaching the mountain summit or breaching the ocean surface with a pack of dolphins becoming entirely unforgettable and incredibly replayable, even through the Theater Mode that eliminates the Tetris aspect altogether. 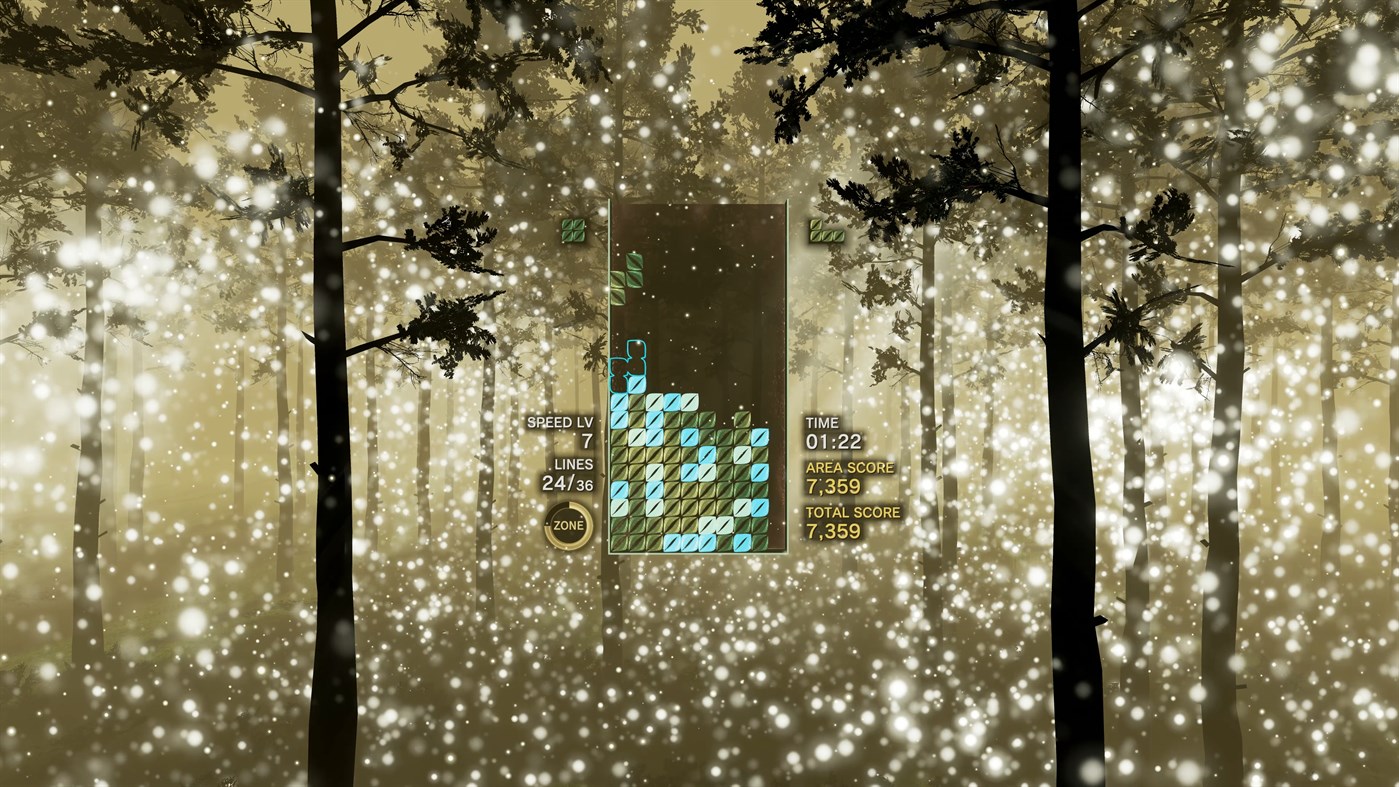 Tetris Effect: Connected is undoubtedly the best complete Tetris package that I’ve played. With Connected’s addition of cooperative and competitive multiplayer, it contains virtually every mode you could hope a Tetris game would have, whether it’s relaxed or intense, alone or with others. The true star of this version of Tetris, though, is the presentation, which mixes visuals and sound in a way that uniformly enhances the experience without touching the core gameplay. Tetris is one of gaming’s quintessential pieces, and Tetris Effect: Connected makes that piece ever more unforgettable.

Final Verdict:
AMAZING
The way Tetris Effect: Connected complements its traditional yet timeless Tetris gameplay with a gorgeous, constantly evolving presentation, combined with an array of modes that now encompasses everything you can want in a Tetris package, makes it the best way to experience one of gaming’s quintessential pieces.
A copy of this game was provided by Developer/Publisher/Distributor/PR Agency for review purposes. Click here to know more about our Reviews Policy.