Creator Johnny Galvatron says that 4K/60 FPS on the Xbox One X is “on the cards.” 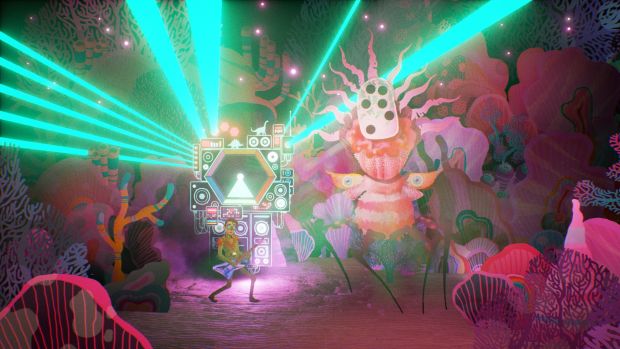 Of the many games seen during Microsoft’s E3 2017 presentation, Beethoven and Dinosaur’s The Artful Escape is perhaps one of the more aesthetically pleasing. It’s theme has roots in music as you take on the role of Francis Vendetti, the nephew of a music legend, as he undertakes a journey to find his own path. That journey just so happens to transcend the physical plain.

However, at E3 2017, The Artful Escape creator Johnny Galvatron had truly transcended from music to game development. As the lead guitarist for The Galvatrons, he decided to bring his game to consoles via the Xbox One and Xbox One. Of course, it’s coming to PC as well but why not other platforms?

GamingBolt spoke to Galvatron about the same and he said that he made the decision, “After seeing it play at 4K on the dev kit. Can’t go back after that.”

He also noted that the platformer would be receiving Xbox One X support and that native 4K and 60 frames per second were on the cards. Which is a good thing because The Artful Escape already looks pretty amazing. Imagine what it would look like in 4K/60 FPS.

Sadly, we’re going to have to wait to see since the game has no release date. Stay tuned for more information on the same though.

Tagged With: Annapurna Interactive, Beethoven and Dinosaur, pc, The Artful Escape, Xbox One