The Banner Saga 3 Review – Light of All Lights

Masterful writing, compelling combat, gorgeous visuals and an incredible score are just a few reasons you should play The Banner Saga 3.

Before humanity dove deep into social media, throwing every little detail into the spotlight, events were recorded through more rudimentary means. The Palaeolithic era had cave paintings with hand outlines and animals. The ancient Egyptians (among other races) had hieroglyphs depicting rituals and rulers. Tapestries, paintings, poems and songs spreading through word-of-mouth – events existed not as information in a vast stream of quickly moving headlines but actual happenings. Stories that the human psyche could empathize and understand, draw strength and courage from, or discern the meaning of life. 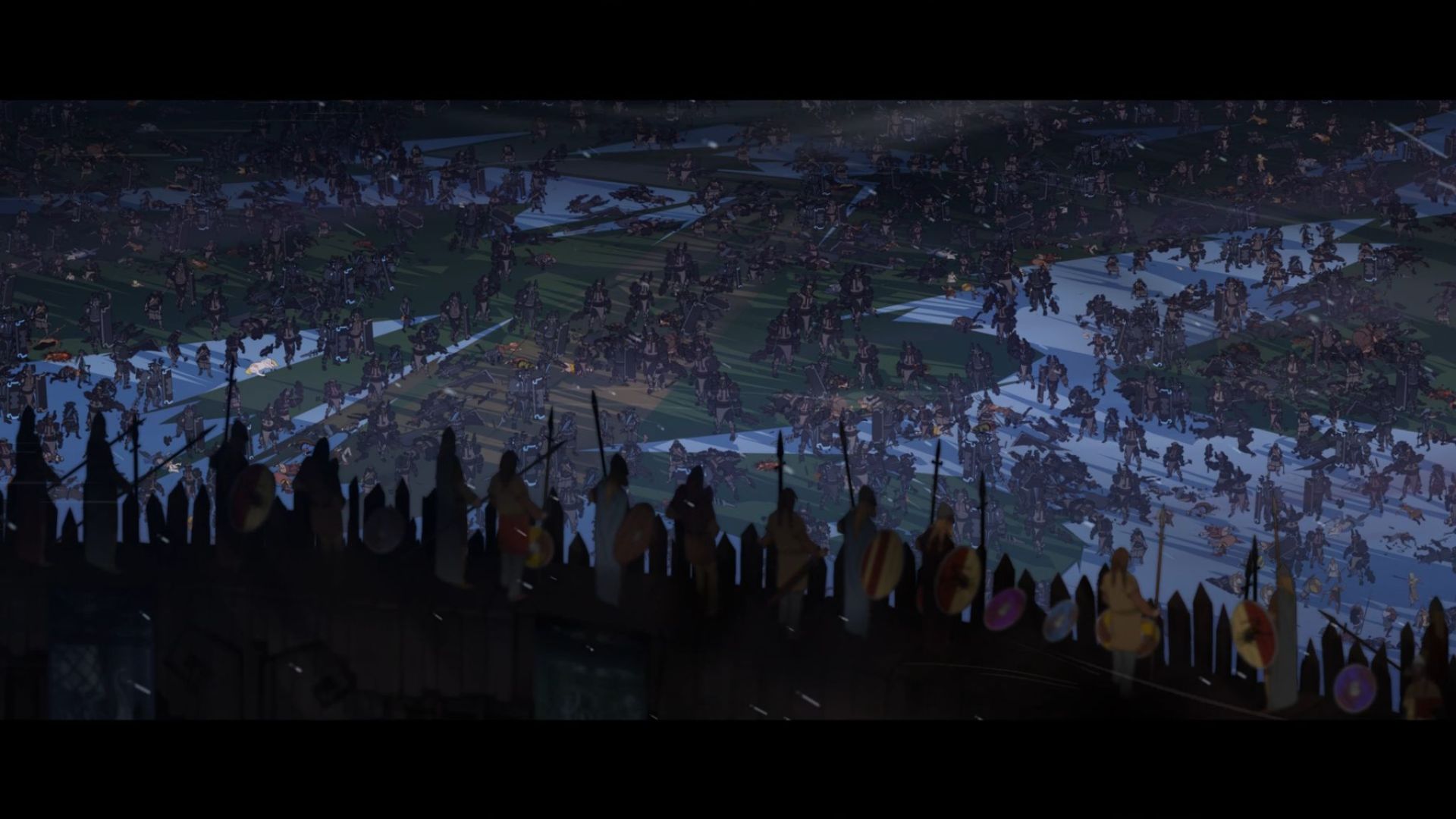 "The Banner Saga 3 deals blow after blow with its story beats, challenging you to make tough decisions and dealing with the tragic results they may yield."

Stoic Studio’s The Banner Saga 3 embodies that kind of storytelling, an art form where events feel real and organic even as bloody conflict, chaos and death can stand out the most. It’s the epitome of a trilogy, the end of the intricate banner, weaving memorable battles and conflicts without ever losing focus on its characters. Gameplay-wise, The Banner Saga 3 is also a pretty good tactical turn-based RPG with a variety of interesting fights, decision-making and resource management. However, the gameplay is so intrinsically interwoven with the story that it doesn’t just play out against the backdrop of an epic tale. The tale itself is the real hook,  an amalgamation of all the conversations, decisions, consequences and combat that you’ll stumble into.

Without delving into many spoilers, The Banner Saga 3 starts off with the world on the brink of ending. An overwhelming darkness is warping and consuming everything. There are two primary groups at play – the first in Arberrang, the capital of men in Rundwall where numerous refugees, clans and races are making their final stand against the Dredge. It’s not quite as simple as it sounds though. The city is a melting pot for political and racial interests, even as the darkness approaches, threatening to boil over and consume those holding out hope. The second group surges into the darkness to find its source and ideally shut it down for good. It’s the apocalyptic version of “A group of mercenaries, Varl, Valka and men walk into the abyss.” Except the punchline is far grimmer.

Don’t let the immediate cut to action at the start fool you. The Banner Saga 3 deals blow after blow with its story beats, challenging you to make tough decisions and dealing with the tragic results they may yield. For instance, Arberrang is falling apart. Do you become the benevolent clan leader and dole out supplies to the hungry while allotting fighters to reinforce the wall? How do you deal with the various races and armies, whether Dredge or human and still maintain some semblance of order? Will stepping into certain arguments and fights help improve Morale or hamper it? The series’ survival aspect, where you manage supplies and your clan, is executed masterfully in this regard. Garnering resources is important but balancing that with the number of individuals in your clan is equally vital. You might want everyone on your side but keeping them there is another task altogether. 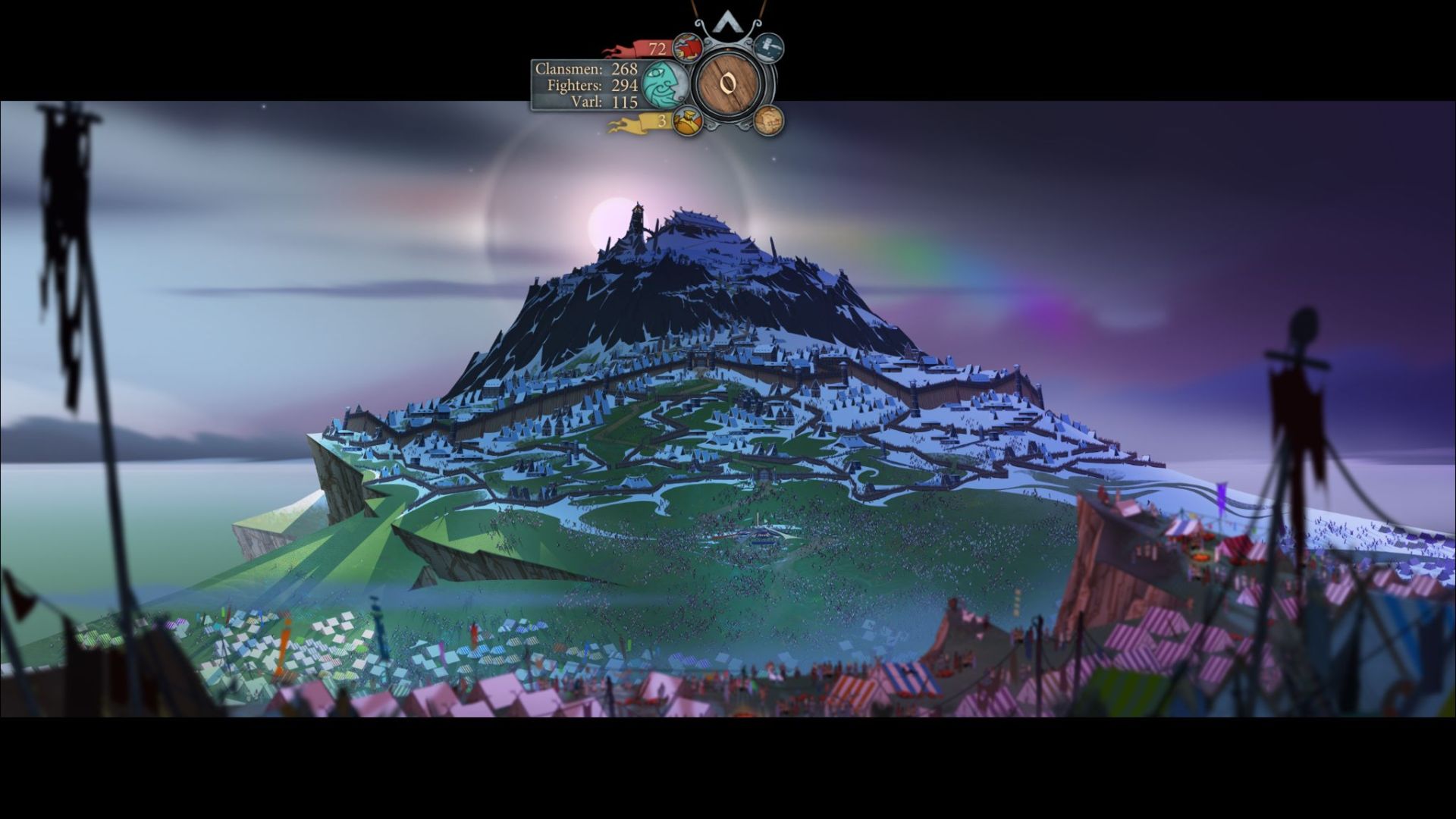 "For The Banner Saga 3 to tell its compelling story while having nearly every character, even those you don’t control, essential to the plot is astonishing, to say the least."

This feeds back into yet another great thing about the game: Choices have weight and meaning. They’re not simply arbitrary. When you see something terrible happen, you wonder if nothing really could have been done to prevent it. You question the choices made up till that point. Then again, while plenty of situations don’t require the “right” or humane answer, would you really have acted otherwise? Keep in mind that your every decision will contribute to the ending. Despite the journey itself being the real highlight, my ending was a bittersweet finale to the suffering these characters had endured.

Much of the motivation for the decision making can be chalked up to the stellar writing. Each and every character, from the sisterly yet headstrong Oddleif to the solemn yet trustworthy Iver, from the hesitant but pure Alette to the outlandish Tryggvi, make their presence felt. You could argue that some don’t quite get enough exposure and you’d be right. The game doesn’t let you freely build bonds with every single character. You can’t just walk up to anyone and have a conversation with them, building up your Confidant level and probably getting a sweet weapon from completing their loyalty mission. However, they’re all deftly woven into the story, each playing an important part and revealing their motivations in time. There’s very little fluff to deal with here. For The Banner Saga 3 to tell its compelling story while having nearly every character, even those you don’t control, essential to the plot is astonishing, to say the least.

Amidst all this praise for the characters and narrative structure, you’d think the combat would have its share of shortcomings. On the contrary, the combat is extremely fun to indulge in with enough stat customization, Hero Status Titles, items and strategies to ensure no two battles – or even the same battle – play the same. For instance, in Arberrang, it’s possible to have a Thrasher chip away at Dredge armour while a Varl uses high Strength to attack its health directly. A Horseborn and two Archers could also pitch in from range or apply crowd control and other benefits like Overwatch to deal with moving enemies. On the other hand, you could deploy two Raidmasters and aggro enemies onto their defenses while the Varl and Archers deal damage unhindered. 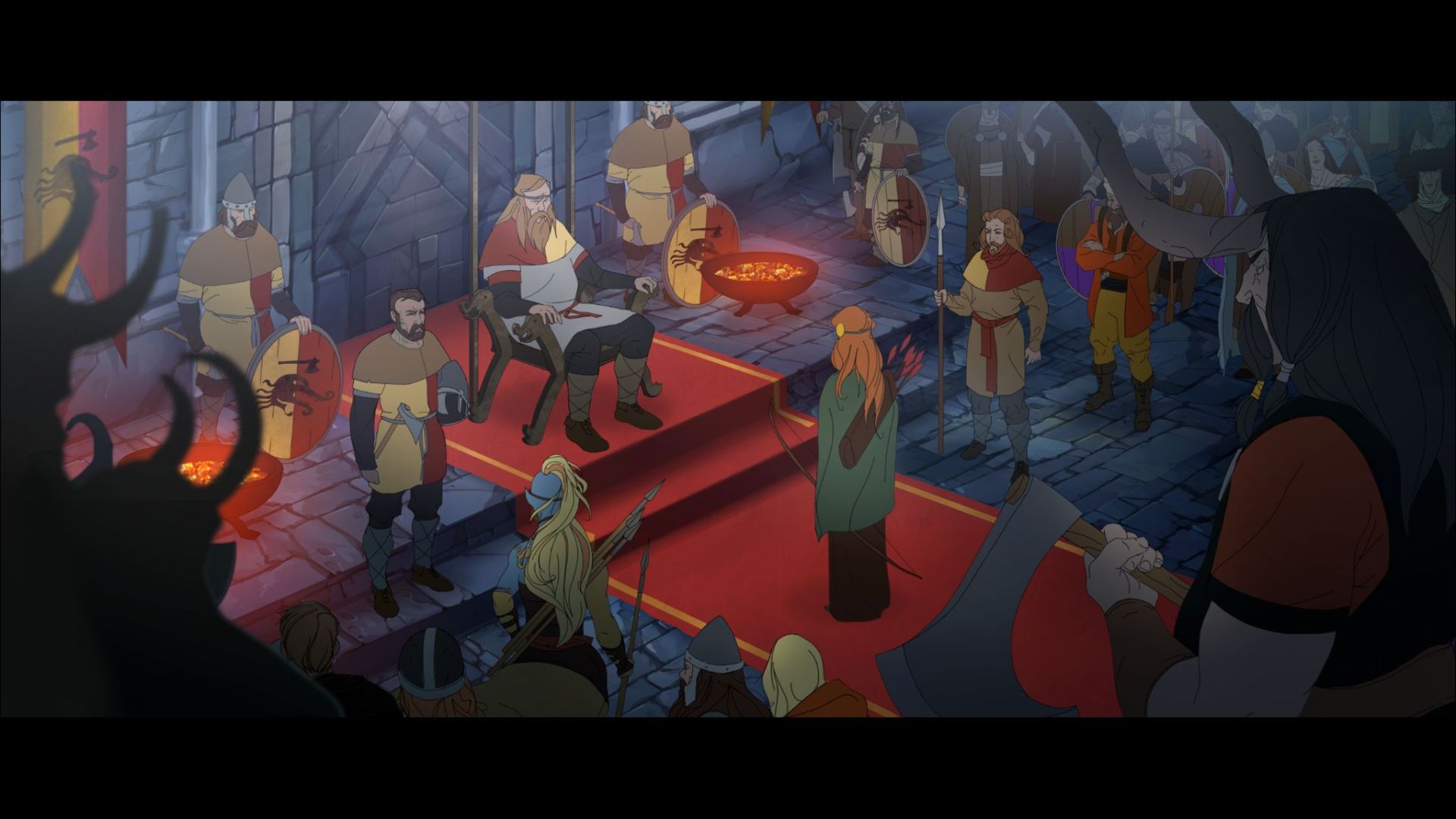 "Battles where various NPCs and enemies remain static while your party and their foes are animated afford some great framing, like the painting of a conflict taking place."

Your own positioning is incredibly vital during fights – taking out stronger enemies is important but so is ensuring your own units don’t become weakened by other foes. Implementing units with unique abilities (like Track) is also vital as is sticking together. Different enemy types, including Warped enemies which explode and grant Willpower to their allies while leaving ashes that diminish Willpower if your units step through them, help keep the action fresh. Transitioning back and forth between the two fronts is also seamless, though at times I found the multi-stage fights in the darkness to be tougher than those in Arberrang.

There are a few nitpicks with the combat. The Valka Spear felt tougher to really take advantage of compared to the Horn. The chain lightning effect was heavily reliant on enemy positioning and despite three charges that could be utilized in a wide range, it still felt more like chip damage. Contrast this limited utility to the Horn that grants Willpower (something that Morale also affects). This can be used to increase damage done to armour, tile movement, Strength damage and more. It wasn’t so much frustrating as a wrinkle during the second group’s fights. A slightly curious wrinkle that I need to get good at but a wrinkle all the same. Being unable to skip through animations during battles, especially when numerous enemies are on the field and taking turns, wasn’t annoying but it would have been a nice option.

If you don’t experience The Banner Saga 3 for its compelling combat, story-telling, characters or decisions, then it should be for the presentation. The aesthetic is simply gorgeous. Travelling through the darkness and seeing past locations mangled horrifically is beautifully haunting in a way. Roughing it through Arberrang en route to the king, taking in the destroyed walls and rival clansmen peering from a distance is similarly epic. Conversations where characters stand out, revealing their full profiles, look gorgeous. Battles where various NPCs and enemies remain static while your party and their foes are animated afford some great framing, like the painting of a conflict taking place. Though there aren’t dozens of cutscenes, those present look absolutely gorgeous and pop up at the most appropriate moments. The Banner Saga 3’s art isn’t just out to look great. There’s a feeling of the environments actually feeling lived in rather than acting as backdrops for the action. 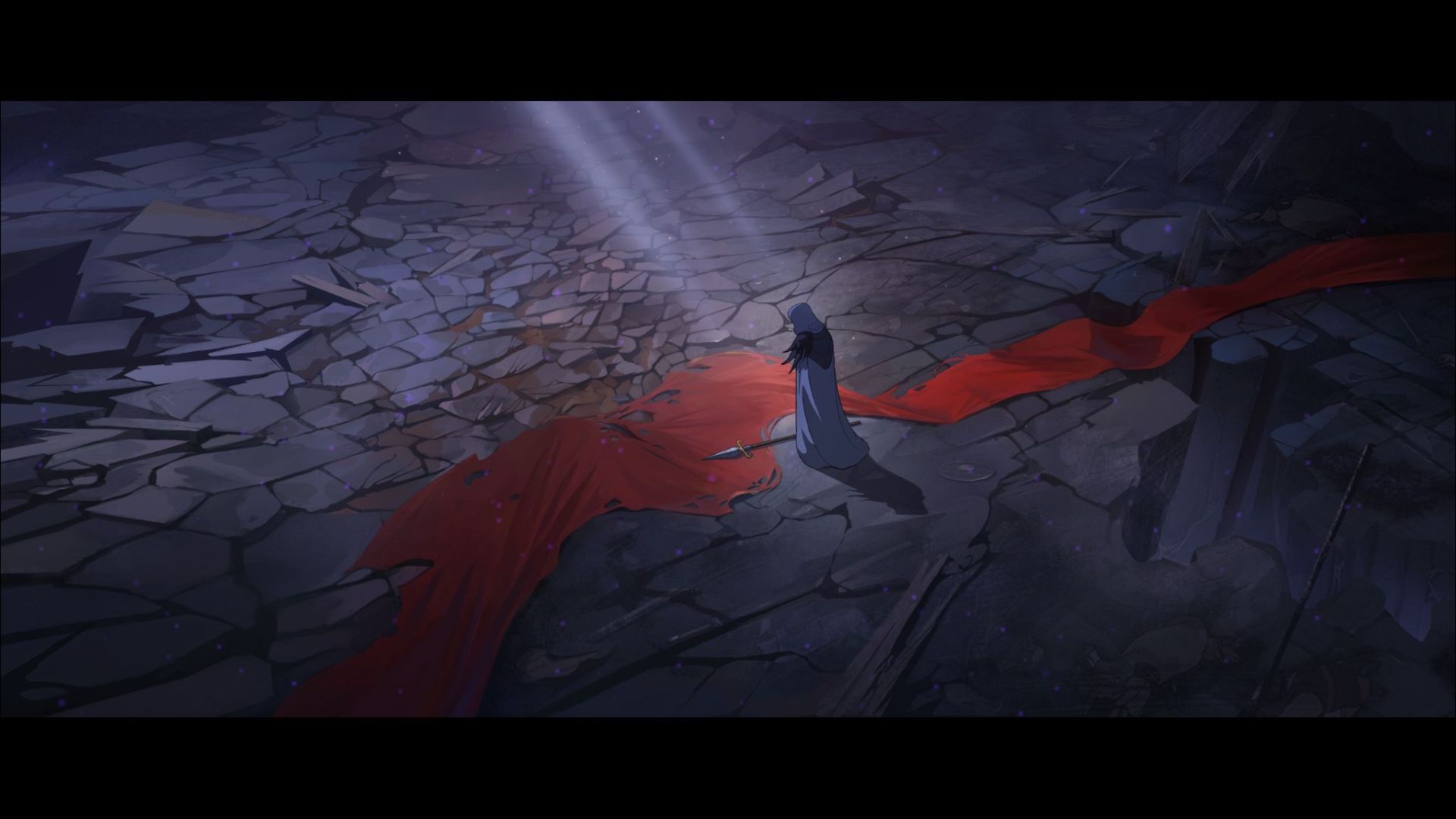 "In a year full of compelling games, both indie and big-budget, Stoic Studio isn’t lost with The Banner Saga 3."

And even then if the art doesn’t grab you, then the music will. Composed by Austin Wintory, the soundtrack embodies everything from twisted, eerie surroundings to tense battles. The music doesn’t completely overpower the action but adds to it, accompanying the emotions felt when a harrowing battle is underway or a threat that could decide the fate of the world emerges. The soundtrack does a great job of conveying a wide range of emotions and can’t be praised enough.

If there was one major issue I could find in The Banner Saga 3, it’s a strange bug that would cause key events and an important battle in Arberrang to be skipped. This bug seems to have triggered during one of the multi-stage fights in the darkness so not going past the first stage of this battle seemed to return things to normal. Avoiding this bug meant a bit of trial and error while reloading progress. It’s nothing that will completely destroy your enjoyment of the game but did serve to disrupt progress while denying one of the key story sequences. Otherwise, the overall polish and performance on PC is exceptional with no other major issues.

In a year full of compelling games, both indie and big-budget, Stoic Studio isn’t lost with The Banner Saga 3. Instead, it delivers a confident and overwhelming yet mature tale of life, death, love, war and the world. It does this in such an incredible manner that’s commendable, to say the least, and absolutely spell-binding at most. The Banner Saga 3 is deftly crafted to appease its fans while also standing tall on its own merits, filling the space in its tale of light and darkness with ample intrigue and nuance.

Excellent writing, from the complex characters and their motivations to the setting and plot. Complex combat that's easy to get into while offering numerous options for strategy. Seamless pacing and transition between two different story fronts. Gorgeous visuals thanks to an excellent art-style and cutscenes. The soundtrack adds to the atmosphere in the best way possible. Survival aspects deftly weave into the decision making and plot.

One bug caused some key sequences to be skipped. Option to speed up battle animations would have been nice.

Final Verdict:
AMAZING
The Banner Saga 3 demands your attention, its story grabbing hold of your emotions and never letting go. As a climax to one of the better modern trilogies in gaming, The Banner Saga 3 is simply magnificent.
A copy of this game was provided by Developer/Publisher/Distributor/PR Agency for review purposes. Click here to know more about our Reviews Policy.