The Elder Scrolls Online Delayed for PS4 and Xbox One?

Bethesda recently posted on the game's official FAQ that it could be delayed by six months. 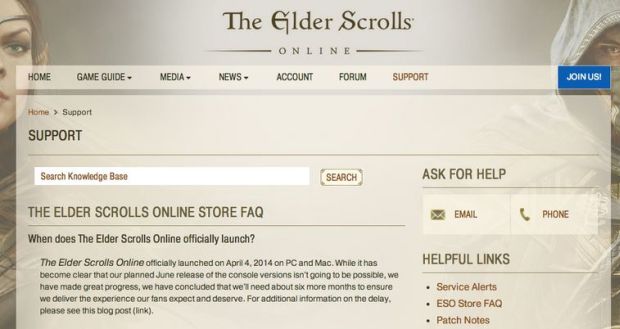 Released to mixed reactions on the PC and Mac, The Elder Scrolls Online was originally meant to hit Xbox One and PS4 in June. But according to Bethesda’s official FAQ, the MMO has been delayed by six months due to the usual need for polish.

However, no sooner had it posted the same that Bethesda altered the FAQ and subsequently went about banning those who posted images or text regarding the same. A discussion on Reddit regarding the same yielded the post in its original form (seen above).

The original text stated that, “The Elder Scrolls Online officially launched on April 4, 2014 on PC and Mac. While it has become clear that our planned June release of the console versions isn’t going to be possible, we have made great progress, we have concluded that we’ll need about six more months to ensure we deliver the experience our fans expect and deserve. For additional information on the delay, please see this blog post.”

So delayed or not delayed? Stay tuned for more details as the story develops.