Bethesda has released a new trailer for The Elder Scrolls Online as well as announcing details for the Imperial Edition and its official Online Store. You’ll be able to head to the store to pre-purchase or pre-order the game in both standard and collector’s editions.

The Elder Scrolls Online Imperial Edition retail version will include a 12″ Molag Bal statue; a 224 page Improved Emperor’s Guide to Tamriel; a 21″ x 26″ printed map denoting Alliance zones and Cyrodiil; Steelbook packaging; and exclusive DLC, including the ability to play as an Imperial in any alliance for bonuses in crafting, gear and more.

You’ll also have a White Imperial Horse, pet Mudcrab and the Ritual of Mara to receive an experience boost while playing with a friend. One also receives The Explorer’s Pack which offers four bonus treasure maps, the ability to select any of nine races in any Alliance and a Scuttler pet.

The Elder Scrolls Online releases on April 4th for PC and Mac, while the PS4 and Xbox One versions arrive in June. 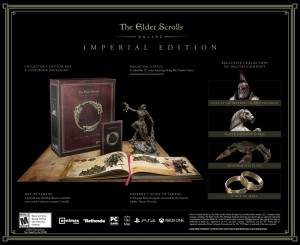