When speaking of video game morality, it’s easy to get muddled and lost in the endless back-and-forth about the ethics of the games themselves. For example, does Grand Theft Auto lead to an increase in youthful car theft? Does Call of Duty make it more likely for a tween to shoot up his home in an adrenaline fueled set-piece  gunfight? I doubt my opinions on the matter will sway anyone either way, and besides, that isn’t the point of the article. I will be discussing the morality and ethics found contained inside the games themselves, from the sliding-scale morality of the Bioware epics to the amoral story paths of The Witcher, and everything in between.

Bioware is a consistent user of sliding-scale morality charts. While they’re not quite as simple as Fable’s Good and Evil orientations, the result is, generally, the same. Knights of the Old Republic has the Light and Dark side scales, and Jade Empire offers the ways of the Closed Fist or Open Palm. While the ethics of each side are supposedly deeper than simple good and bad, the result is that charitable, helpful acts are rewarded with Light Side/Open Palm points and violent or apathetic acts are awarded Dark Side/Closed Fist. It can be aggravating, especially when trying to follow, for instance, the Way of the Closed Fist from the perspective of it being a pragmatic, fight-oriented philosophy (several of the Closed Fist NPCs tell you that it goes beyond simple good guy/bad guy stuff), and waffling around somewhere in between because the game doesn’t emulate the writing. Choices are presented in simplistic, polaric terms: the character can help a villager pay off some debt, or the character can murder the villager. Far too few of the encounters in Jade Empire offer the kind of interesting dichotomy that the dialogue seems to present. 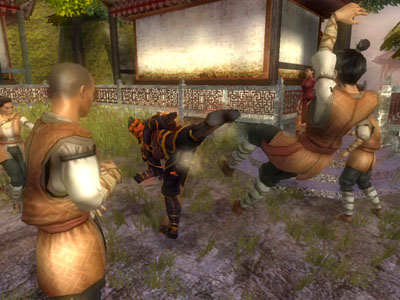 The same can be said for following the Dark Side; though characters in-game constantly talk about a deeper thread than simple acts of douchebaggery (especially with Kreia in Knights of the Old Republic II), you can’t seem to be a true follower of the Dark Side without being as stupidly and ignorantly violent as the game allows you to be. It’s disappointing, then, that the nuance of the writing doesn’t exactly reflect in the nuance of the mechanics.  Mass Effect does a better job of it, but it’s still not quite perfect. Paragon or Renegade are the options as presented, and while it is a bit more clever than previous Bioware installments, it still boils down to Renegade = Asshole, Paragon = Annoyingly Kind.  Bioware has always been strong in writing, and though the plodding morality hasn’t improved much in terms of character nuance, the choices that you make based on your alignment deeply affect the game itself. It serves to underscore the idea of action manifesting itself in consequence. But if you think about it, if actions inherently carry unforeseen consequences, why the need for a morality bar at all? It seems rather redundant and arbitrary then, whether you decide to charm people or intimidate them, if the actions themselves carry much more cathartic weight. 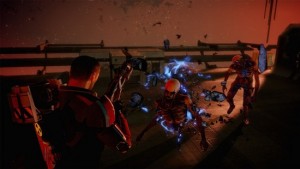 Fable, of course, has its own wonderfully fun approach to good and evil. In this case, story and dialogue choices are left out of the mix, and the game relies on giving specific actions a moral weight. Theft, murder and other nefarious acts earn the player Evil points, and helping villages, taking Good quests from the Guild earns you Good points. Each of the hundreds of possible actions that you have carries with them a moral element that manifests itself on your character’s body. An evil player will grow horns, have red glowing eyes and scorches the earth underfoot, whereas a good player will develop a halo wreathed in butterflies, and a healthy glow to their skin. Your appearance, then, dictates how you’re treated by villagers, city officials, and guards. A player walking around in burnt-black plate armor with glowing eyes and horns will send villagers running for their lives, taking cover behind desks and boxes, and will cause guards to ominously warn you not to mind your manners, please. A Good player has the opposite effect, and will also cause little kids to follow you around. That element is perhaps Fable’s most clever addition, in that the NPCs don’t interact via stale, replayable dialogue options but rather in more natural ways. It subtly indicates the annoying, pestered nature of the Hero better than many other games, and it gives the player the option to sacrifice children to a diabolical devil-cult. It’s disappointing that the sequel didn’t carry this idea much farther. The core of the game is still there, with actions carrying a moral weight, but, unlike in Mass Effect, your previous character has a very stale, unchangeable impact on the world as a whole. Fable II also stretches your suspension of disbelief by giving the character, good or evil, the same rather flimsy main quest. It’s hard to believe that a character who would willingly murder every NPC in Bowerstone and a character who would go out of his way to help those same people with anything they need would have the same goal. 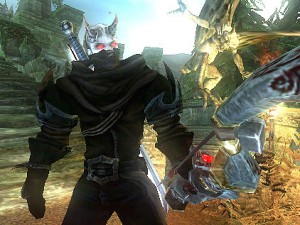 Not all games with an ethical lean contain a scale, however. The Witcher represents morality in a cold, pragmatic sort of way. Each action has a consequence, and those consequences manifest themselves in surprising ways. Geralt, the player character, is not rewarded for performing acts of heroism, nor is he necessarily punished for acts of wickedness. As the game progresses, in fact, it’s hard to tell at all what constitutes a heroic act over a wicked one, and as such, the game itself makes a stand on morality. There is no good, and there is no evil, there are just actions and consequences. The consequences are sometimes surprising and sometimes not, but no one can argue that they don’t have a deep effect on the story itself, in minor or major ways. Toward the beginning, Geralt is given the choice to fight off a group of Elven freedom-fighters (or terrorists, depending on which way you lean), or to allow them to take a load of weapons with them. Choose to leave them be and later on an underworld contact you must find has been killed by those very same Elves, who are now more efficiently armed and have become bolder. Fight them off, and you ruin the chance that another NPC has of making peace with them. It’s a complicated situation, and each action has its own justification. The Witcher abounds with these kinds of choices, which serves to make the player hyper-aware of their role within the boundaries of the world. Witchers themselves might be neutral, but when you’re faced with a friendly NPC of yours getting murdered in the streets because you didn’t intervene, it casts a new light on the cost of neutrality. 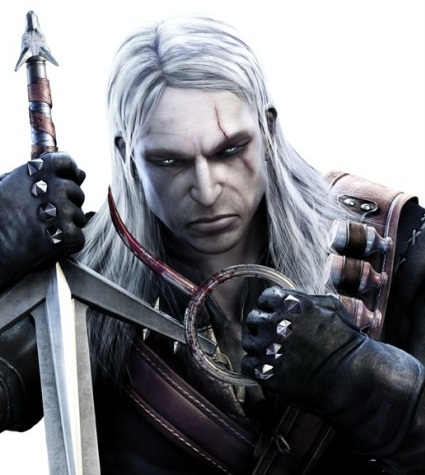 There are other games that don’t seem to deal with morality, but simply by allowing players certain choices, morality is thrust upon them. Strategy games like The Creative Assembly’s Total War series offer the player the chance to massacre or enslave the denizens of conquered towns, which turn even the most cheese-eating of sissies into Machiavellian dictators in a few turns. The Sims is another good example, with players undoubtedly turning to torturing some of the created people within hours of exploring the game. Building a pool around a very tiny square where the unfortunate Sim had been standing (the hapless Sim, of course, being deathly afraid of drowning), walling up another one inside a room with no doors, windows, or restroom, or manipulating neighbors into riotous feuds are all part and parcel of a Sim player’s common repertoire. No penalty is given in-game, no restrictions are levied against the player, they simply experiment with the freedom the game offers. Grand Theft Auto is an easy target (as are most of the open-world, sandbox type games that are the clones of Grand Theft Auto), because, while it doesn’t necessarily reward the player for perpetrating acts of extreme violence, it doesn’t necessarily penalize players, either. And there’s a certain catharsis from mowing down sidewalks full of civilians or causing a daisy-chain of explosions from the thirty-car pileup you’ve engineered. The achievements don’t hurt, either.

So what does it all mean? Are game designers out there trying to show us the error of our ways and tacitly tell us to go to church more often? Or is morality simply another element in a long line of developments that allow designers to tailor an experience to a specific player? Certainly, there’s an angle of replay value; gamers want to find everything that they can in a game, and if that means three or four replays then that means a player will be more open to the DLC when it comes out. But maybe there’s more to it than simple commercialism. It’s the kind of thing that, in the long term, help to elevate games as an artistic medium, rather than a simple module of brainless entertainment.