Having unveiled the no-longer-secret name for Project Natal (it’s called Kinect now, which doesn’t sound as secret), Microsoft wasted no time in showcasing its versatility for everything but gaming. They eventually got around to it, but with nothing aside from the Wii Sports-like minigames to go on, there’s really not much to say yet. And sure, Zune movies and Netflix and Facebook are all fine to be controlled with simple hand motions and voice controls, which work fine when one person is standing in front of the thing (no indications of the limitations of the device when a room full of talking, moving, playing people are around). I’ll admit, it looks pretty cool. Even though I still feel like there will always be a place for a handheld controller – I still hate the meaningless peripherals with most of the Wii games, I really only use the Wii-motes for Wii Sports – I also feel like game makers should go for broke in making Kinect-oriented games. Using an entire body for a controller will open up limitless opportunities for creating games that are, right now, virtually impossible to do outside of having a tightly scripted, contextual control scheme. And while that can be great (Assassin’s Creed II, for example), most of the time, contextual controls can be frustrating when the controls aren’t perfectly intuitive (Assassin’s Creed, for example). 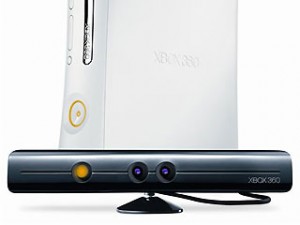 Having body and hand motions means that the motion you use to jump onto a wall will be different than the one you use to pick up an object, meaning if you’re running for your life from some guards you won’t stop to pick up a weapon or something and get yourself killed because the context controls misinterpreted your button press. Imagine a Star Wars game in which your lightsaber training missions actually teach you the movements you’ll need to make in order to fight. Even force options could be utilized in a way that simply wasn’t possible before this. Making a hand gesture at a stromtrooper could push or pull him toward you, grabbing a piece of junk and tossing it toward a group of people will be effortless and misinterpretation on the part of a context-system would be minimized.

Of course, the first thing I thought was going to happen with the Wii-mote was a Star Wars game that embraced the natural inclination toward waving the thing around like a lightsaber, but so far, nothing like that has been forthcoming. It’s mostly Mario games or party games, and even the games that do tend to embrace the Wii-mote only map the controls to absurdly simple motions that would probably be a lot easier and less annoying on a controller. The only game I can see that have truly taken a step forward has been Wii Fit, and that can hardly be considered a game. A Wii fitness peripheral, maybe, but not a game.

In any case, Kinect-formerly-Natal looks excellent, and here’s hoping that developers will give it a chance to really make it worth the price.