Posted By Rashid Sayed | On 19th, Dec. 2010 Under Reviews | Follow This Author @GamingBoltTweet

Sly Cooper is back in this awesome high definition remake of the original games which were released more than half a decade ago on the PlayStation 2. The collection includes Sly Racoon, Sly 2: Band of Thieves and Sly 3: Honor Among Thieves.  It’s a well known fact that Sucker Punch’s entire Sly franchise has been a huge hit among gamers due to its really unique comic and sometimes humorous take on the story of three thieves.  So in the game you basically take up the role of Sly who belongs to the Cooper family who have all specialized in being amazing thieves in their times. When Sly was a kid, his father was killed by one of his long time nemesis and hence he is left alone and goes to an orphanage. There he meets his future long time buddies Bentley who is a turtle and Murray the hippo. 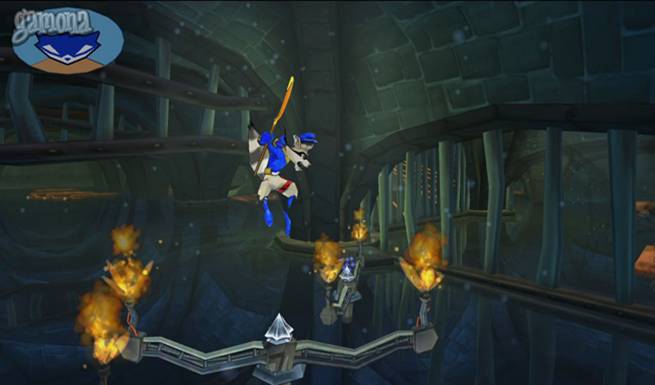 The platforming sections never get old

All the three games tell some interesting stories. The first one focuses on the trio seeking out out the Fiendish Five in order to recover his family’s “Thievius Raccoonus”, a booklet which had the various techniques of all of Sly’s ancestors. Band of Thieves focused on getting hold of all the clockwork parts from the Klaww Gang. These clockwork parts are nothing but the elements that made up the final boss in the first game. And the final game, Honor Among Thieves tells the tale of Sly and Bentley as they attempt to gain access to the Cooper Vault on the fictional Kaine Island. The best part of the Sly Trilogy is that it does not require you to play the games in order in order to unlock the remaining ones. A player can just drop in and start playing any of the HD remakes in any order.

One of the things that never get changed in HD remakes is the good old solid game play. And I am very glad to report that even after so many years, Sly is a joy to control. All the three games require the player to play patiently and employ the techniques that a real thief will. Using the combination of stealth and sneaking around is rewarding and is the only way to go ahead if you plan to play these games seriously. In all the compilations your cane is your best friend. The cane will obviously help you to smash enemies, get hold of bars and swing across spaces. In addition you will also be able to pick pocket guards for valuable information or objects like keys, which brings to me to say that most of time in the game you will be collecting keys to unlock turret systems, rockets and doors.

Sly is your main playable character in Sly 1 but you will also get a chance to play as Bentley and Murray in the other two games. Playing these two characters are a ton of fun, albeit their levels are pretty much on the shorter side. The basic enemies are pretty simple in all of the three games. In the first game you will require just one slap to the bad guys to take them out, but in the second and third games, Sucker Punch made it a harder to take down enemies by increasing the number of hits that an enemy should take before it busts in to smoke.  Health bars are also different in the second game compared to the first one.  In fact there was no health bar present in the first game and Sly would die immediately whenever an enemy could spot and hit him. From second games onwards, the developers added a health bar which according to me made the game a bit more challenging and added more tension to the game play. 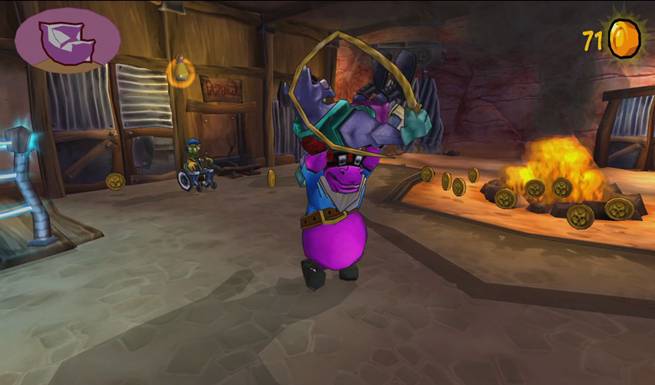 Playing as Bentley and Murray were a ton of fun

The heart of the Sly franchise has always been the excellent level design all colorfully cell shaded. The games always looked amazing back then and now they even look better due to high definition make over. You will be travelling across a plethora of new locations all brought to life again, due to power of the PlayStation 3. The best looking character is obviously our raccoon with beautiful animations swaying in and out of his tail. The voice acting and the presentation of the funny and the “so called” violent looking enemies have been wonderfully implemented by Sucker Punch. The boss battles are engaging and at the same time satisfying though I think they were a bit on the easier side.

The Sly Collection is a great addition to the library of any PlayStation 3 owner. For fans who have never played any of the Sly games before, this is a great chance to relive one of the last generations most loved platformer. The price point might be an issue for some, because these games are almost five to seven years old and the camera at times is outright horrible, but if you are able to overlook these issues you should have a great forty “action and humor filled” hours ahead of you.

Camera is horrible at times; Price point may be a bit high for some retro gamers

A copy of this game was provided by developer/publisher for review purposes. Click here to know more about our Reviews Policy.
Tagged With: ps3, PSN, sony