Plus, a response by CD Projekt RED to criticisms over this. 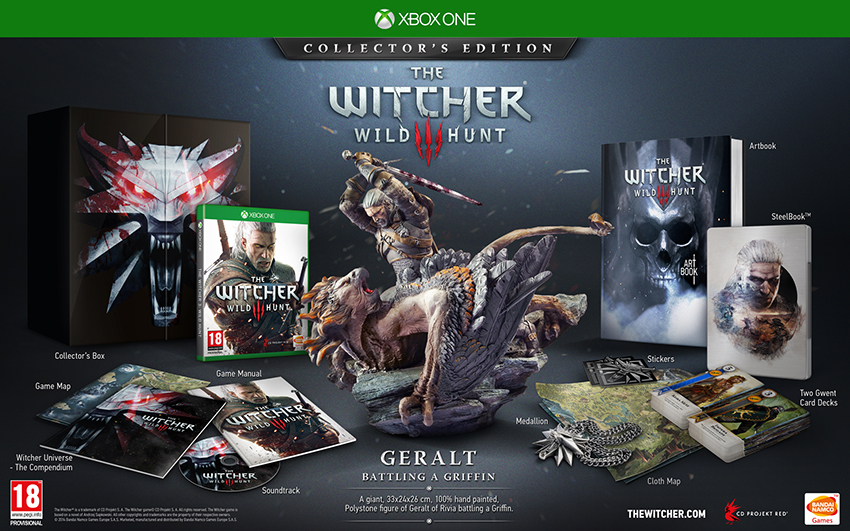 But yes, that Collector’s Edition looks sweet. It’s actually pretty sweet, if you look at it. It includes all the stuff that the Collector’s Edition on the PlayStation 4 and PC include, but in addition, it also includes a cloth map, as well as two physical decks for Gwent, a card game that is played in the world of The Witcher 3.

It’s a sweet addition, and honestly, it’s not that much, though it is cool. However, it is what appears to be favoritism of the Xbox One here over the PlayStation 4, and a lot of fans have spoken out against it, partially because CD Projekt RED promised that the game would be identical on all platforms. Here is what they had to say about it.

“Looking at the heated comments, I believe that our announcement of the physical addition of two decks of Gwent cards and a cloth map, requires a further word from us.“Here at CD Projekt RED, we always put gamers first. Our PC versions are released DRM-free, we bend over backwards to give you the most beefed up editions of our games (be it standard or Collector’s), and we deliver the same game, regardless of platform or version you buy. Moreover, we promised not have any exclusive DLCs, neither per platform nor per retailer, and we do stand by our promise–nothing has changed, nor will change in this regard,” they said.

“Don’t get me wrong, I do understand that these extra items might be desirable for Witcher fans playing the game on other platforms. However, as we are not offering any platform or retail exclusive DLCs or any other form of gameplay differentiation, we do have to find other ways to support our partners. We are also providing special pre-order items for certain retailers around the world, including Witcher comic books, posters, steel books or medallions. Funnily enough, we did not notice any heated comments on the pre-order specials.“What is the reason? Why are we doing this? We need the support of partners to make our game visible worldwide. This should hopefully translate to better sales, which will in consequence allow us to do what we have been doing for the last 10 years, i.e. reinvest this money to make more great RPGs, while still sticking to our values.“If you still consider that adding two decks of Gwent cards and a map of the in-game world to the Xbox One CE equals us betraying our values and not fulfilling our promises, well, it does make us sad, but the final call is always yours to make.“Still, I do hope that what we offer is unique and we can ask you to give us the benefit of the doubt. We have more great things to announce for The Witcher 3: Wild Hunt in the coming months and I promise you won’t be disappointed (yes, yes, there are no more exclusives coming).”

I’m okay with this, CDPR. For what it’s worth, I am okay with this. The additions are a nice token. but they’re ultimately irrelevant to the larger game, which, as you promised, is on par on each platform.