The Witcher 3 Wild Hunt Visual Analysis: PS4 vs. Xbox One vs. PC

Posted By Ravi Sinha | On 25th, May. 2015 Under Article, Graphics Analysis

CD Projekt RED’s The Witcher 3: Wild Hunt is finally here and it’s gone through its fair share of transformations since first being revealed in early 2014. Regardless of which side of the downgrade fence you sit on, there’s no denying the visual fidelity of the game, especially given its immense scale and open world ambitions. Are the PS4 and Xbox One properly equipped to handle this grand-standing adventure? Will any interested PC users find their hardware woefully outmatched?

Before we get into that, it’s important to discuss the newest iteration of REDengine, CD Projekt RED’s in-house game development engine that’s powered all The Witcher games thus far. REDengine 3 will also be used in Cyberpunk 2077 so this is as good an opportunity to see it shine as any. In The Witcher 3: Wild Hunt, REDengine 3 takes advantage of 64-bit architectures along with featuring HDR rendering, volumetric effects, higher resolution textures and even more dynamic physics than the previous game’s Havok tech. Deferred and forward rendering pipelines are handled by a new flexible renderer and this helps to add a hefty amount of effects including colour grading, bokeh depth-of-view, etc. If that weren’t enough, the terrain now features tessellation.

Head to head comparison between PS4 and Xbox One versions. Please select 1080p and 60fps for best possible video quality.

All this technology sounds impressive, especially on the PS4 and Xbox One. The former runs at native 1920×1080 resolution and while a dynamic resolution was indicated for the Xbox One, marking a shift between 900p and 1080p at times, it’s mostly seen in cut-scenes and certain gameplay situations. This isn’t the first time an Xbox One title relied on dynamic resolution scaling. Call of Duty: Advanced Warfare is another prime example, except unlike The Witcher 3: Wild Hunt, it doesn’t quite take advantage of the additional GPU resources that Microsoft has freed up for non-Kinect games. A full HD resolution would have been great on the Xbox One but this will do.

That’s because both the console versions rely on a mostly solid 30 frames per second frame rate. The PS4 version is somewhat more frequent in its frame drops, especially in action sequences and even with VSync, it’s not odd to see the frame rate drop to the mid 20s at times. A patch is on the way to correct this and judging from impressions in the pre-launch build of the game, frame rate performance is showing marked improvement with each new update. It’s interesting to note that the frame rate performance of the Xbox One version is actually higher, moving from the upper 30s to low 30s quite a bit. The problem of course is that it results in frame stuttering at times. You’ll notice this in certain in-game cut scenes when the action suddenly jerks ahead, skipping a few frames in the process. But if CD Projekt RED could manage higher 30 FPS performance on the Xbox One, it’s surprising that it didn’t choose a locked frame rate.

Regardless, frame rate performance for both consoles is good, especially when comparing to the visuals of the PC version. Several implementations like chromatic aberration, light shafts with bloom have all faithfully made the transition from the PC to the Xbox One and PS4. The Witcher 3: Wild Hunt may look best on master race hardware but current gen consoles haven’t been short-changed at all. Ponder that CD Projekt RED could optimize such an enormous game to such an extent on consoles while other open world efforts from the likes of Ubisoft struggle.

It’s not all hunky dory though, as the foliage density on the PS4 and Xbox One versions don’t impress quite as much as the PC version. Foliage draw distance is similar on both consoles with the Xbox One losing out slightly due to its lower 900p resolution.

Head to head comparison between PC and Xbox One versions. Please select 1080p and 60fps for best possible video quality.

We were also slightly disappointed by CD Projekt RED’s anti-aliasing solution which is a post-process custom AA similar to FXAA but with a temporal component. It’s not as good looking as MSAA and it’s preferable to install MSAA via drivers and disable in-game anti-aliasing on a PC. It may affect your performance but results in much sharper visuals. The post-processing effects of Blur and Sharpening appear to oppose each other but the recent 1.03 patch on PC results in higher sharpening effects, and the bump in texture quality is obvious. Anything less than the High setting results in some noticeable aliasing, even at 1440p resolution and whether either console will benefit from the increased sharpening remains to be seen.

Character models are very impressive, both geometrically and in terms of facial animation quality. Ambient occlusion is also present for shadows, resulting in less dithering, and bloom and light rays have been amazingly implemented. Despite the overall despondent tone of the Northern Realms, you’ll stop to admire the sun rise and sun set more often than you’d think. Dynamic formation of cloud cover resulting into real time lighting and shadow changes is a sight to behold. Not to mention the fact that winds can actually control ripples and waves of lakes and ponds is truly something out of the box.

Though several games have been notorious for having better anisotropic filtering on the Xbox One compared to the PS4, the quality difference in The Witcher 3: Wild Hunt doesn’t appear as obvious. Texture filtering is a little better on the Xbox One and can usually be observed in distant objects at times.

Now let’s get to the good stuff. It was obvious from the outset that The Witcher 3: Wild Hunt would shine brightest on PC. Along with HBAO+ implementation, Nvidia Hairworks and the ability to toggle max frames per second, the PC version also allows you to customize blur, motion blur, vignetting, bloom, light shafts, the number of background characters, shadow quality, texture quality, grass density, terrain quality, detail level and much more. Anisotropic filtering can also be set to 16x, thanks to the recent patch. Foliage visibility range and water quality can also be played with and a maximum resolution of 2560×1600 is supported.

Graphics options in the PC version of The Witcher 3: Wild Hunt. 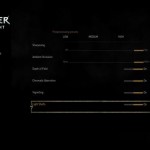 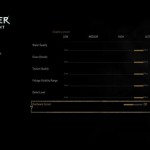 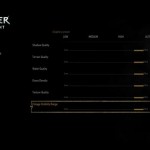 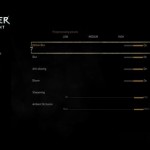 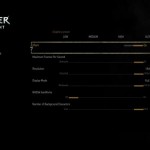 That being said, we decided to test The Witcher 3: Wild Hunt on an Intel Core i7-5960X with 16 GB of RAM at 1920×1080 resolution on Ultra settings. Nvidia Hairworks has been disabled (and we’ll explain why in a bit). The frame rate performance with various graphics cards is as follows:

Though we disabled Hairworks to provide a more straightforward comparison between AMD and Nvidia cards, it was also due to the huge performance hit. Given the game changing experience that 60 FPS offers here, we’d prefer it over hairworks solution. You can customize the amount of resources Hairworks utilizes by finding the game’s “rendering.ini” file and changing the value of “hairworksMSAA”.  Those who own better graphics cards can take solace in the fact that not only does The Witcher 3: Wild Hunt satisfy their visual needs but that many settings can be increased by heading to the config files.

In summary, The Witcher 3: Wild Hunt is best represented on the PC thanks to its 60 frames per second performance, range of graphical options and the ability to play at a higher resolution. We’re a little bummed that MSAA isn’t supported in-game but it’s not really a negative. Both the PS4 and Xbox One versions also look excellent, though we give the nod to the PS4 in terms of image quality thanks to native 1080p resolution. Whichever platform you ultimately decide to experience The Witcher 3: Wild Hunt on, you’ll be in for a treat.