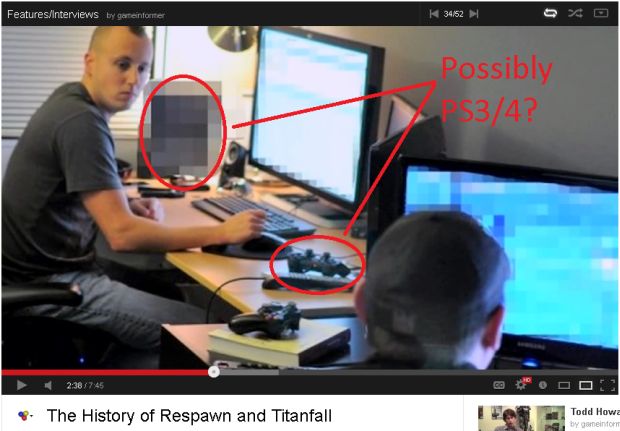 Ever since rumours about its exclusivity towards Microsoft’s next generation Xbox One console to its reveal at E3 2013 and the confirmation that it would only be arriving for Xbox and PC, many have wondered if Respawn Entertainment’s Titanfall would ever come to PlayStation consoles. The powers that be at Respawn have neither confirmed nor denied whether it will – just that fans will have to wait till it appears on either PS3 or PS4 any time soon.

However, a recent screenshot from a developer feature for Respawn and Titanfall showcases something intriguing: A blurred out dev kit in the corner, standing vertically, but with a Dualshock 3 controller close to the monitor. As some have pointed out, this is most likely a PS3 dev kit since PS4 dev kits tend to lay horizontal. Of course, PS3 dev kits can also lay vertical so this argument doesn’t really help.

Sure the video is two months old, but it fits in with Respawn telling PlayStation fans to wait for a PS3/PS4 version of Titanfall. It could be that it’s already in development, but will be timed exclusive for Xbox One/Xbox 360 first. Seems plausible? Let us know in the comments below.