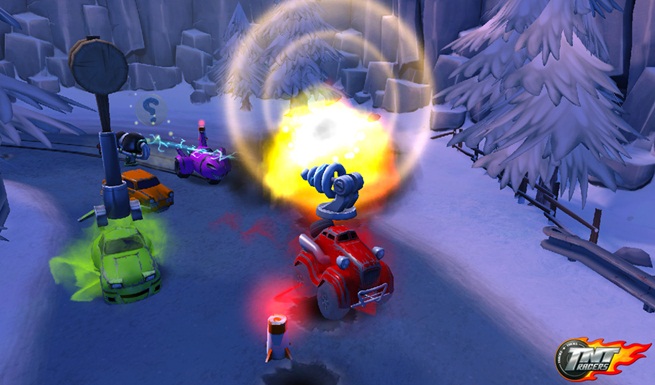 dtp entertainment and keen games today announce the UK release of TNT Racers. The title is available for download now on the Xbox LIVE Arcade for Xbox360.

Costing just £7.99/ 800 Microsoft Points in the UK, TNT Racers features 18 action-packed racetracks for up to 4 players.

Key to the heart-stopping action in TNT Racers is the fun of the multiplayer experience. As well as playing solo, up to 4 players can compete locally together or do battle against friends, family and other players online in a non-stop social competition.

A unique feature in the game is ‘Shadow Racing’. When players are thrown off the track, they immediately rejoin the action as a shadow racer, taking revenge on remaining players and ensuring everyone is always in the thick of the action.
TNT Racers will also be available via the PlayStation Network for PlayStation3 (£7.99) and PSP (£6.29) February 16th 2011 and the release date for the WiiWare for Nintendo Wii (£7.99) is set to follow shortly afterwards.