Posted By Shubhankar Parijat | On 26th, Oct. 2010 Under Feature, Slider 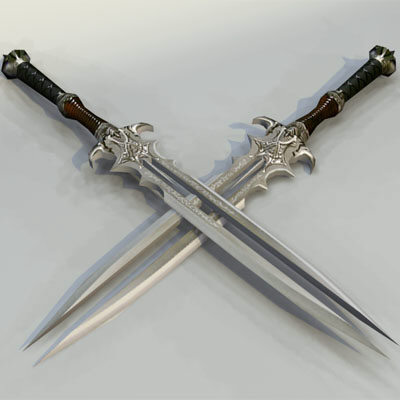 You all like killing people in video games, don’t you (or maybe, just killing people in general)? Liquid Snake once said to Solid Snake: “You enjoy all the killing, that’s why.” Games have become a medium to satisfy oneself via virtual killing. And what better way to slice somebody’s head or pull of an arm with a sword. But, we need cool, powerful swords for that, don’t we?

We present to you the 15 most slicey and dicey swords in Video Games- small as a dagger or huge as a monster, they’re all super-awesome. Take a look!

Come on, a sword that can cut through pillars, cars, people and watermelons? Spectacular! What more would you want from a sword? Not only does it look cool, it also feels super-powerful and dynamic. Maybe that is why all the bad guys have always been afraid of Raiden- because he is now a bad ass ninja and for that he needs to have a superlative sword to keep enemies at bay. It is a treat for all us sword lovers that a game based solely on the usage of this specific, utterly awesome blade, Metal Gear Solid: Rising, will be released within a very short period of time. I am confident the game will be a blast to play through, and the art of Zan Datsu will be all its cracked up to be.

While it must have been insanely tough for a person to get hold of Excalibur II, it is widely acknowledged that this sword is the strongest weapon in Final Fantasy IX, and some of the most insane swords ever. Dealing a damage of 9999 points to a boss, or a dragon at level 1 is no small thing, but Excalibur II gave the user that kind of power. Topping even the Ultima Weapon in terms of power, Excalibur II still is the sword that everyone wants to replicate. I hope we see it again in the future, in Final Fantasy XV, if not in a highly improbably but possible remake of Final Fantasy IX.

Light sab- I meant, Beam Katana! The iconic weapon that Travis Touchdown uses to tear through his enemies is brutal, shiny (too shiny) and it buzzes like a light saber. How cool is that? And the immense satisfaction one gets out of killing hordes of enemies with the help of the Beam Katana is unmatchable. I just hope they make a No More Heroes 3, so that we get to experience more Katana goodness.

The Heavenly Sword, featured in the game Heavenly Sword (duh) is pretty powerful, to say the least. I mean, we cannot attribute the fact that Nariko kills hordes and hordes of enemies just to her strength, can we? There has to be something else at work- something far more powerful. The Heavenly Sword is that one weapon. Having the ability to change its stance, suiting the the player’s need, and all three of the forms being extremely useful, the sword proves to be a life-saver in more situations than can be imagined. Pity we don’t have a Heavenly Sword 2, because if we did, it would kick ass- just because of the sword.

Gunblades are awesome. A sword which can fire shells as well? What’s not to like? Not only do gunblades look awesome, they’re also very well controlled, and deal immense damage to our foes. Even though we have seen gunblades in several Final Fantasy games, Lightning’s Gunblade from Final Fantasy XIII is the most useful, the most efficient, being one of the only gunblades that can fire projectiles as well as attack like an ordinary sword.