Build towers and topple that of your enemies in WeirdBeard's upcoming puzzler.

You know Tetris. You probably love Tetris and have some love for its many variants, especially Tetris Attack. How many times can one reinvent the Tetris block? That hasn’t stopped developers from trying but WeirdBeard’s Tricky Towers may be one of the better innovations till date. While you do have to build high, you won’t be doing it alone as other players can build their towers alongside yours. In a devious twist, players will be able to cast spells to damage their opponents’ towers with the main goal to be the last tower remaining. Fun with friends? Sure, as long as you don’t strangle them for schooling you.

GamingBolt spoke to WeirdBeard about Tricky Towers to find out how the gameplay works and what can be expected of the various spells. Tricky Towers is currently due for PS4 so we asked if an Xbox One or even PS Vita version was on the cards. 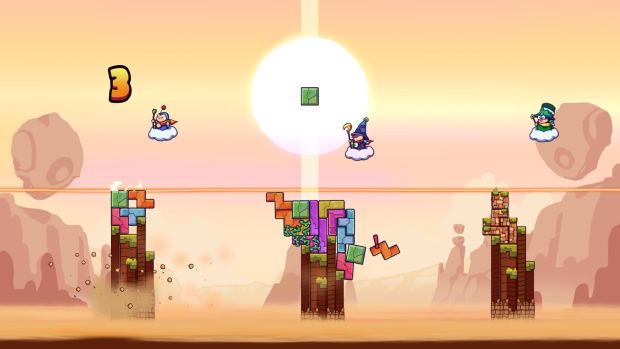 "Definitely, players have to find a balance between building stable towers and attacking their opponents. Learning how to build stable is the first skill level, you could say."

Tricky Towers is a very fun looking spin on the traditional Tetris formula. What inspired the concept behind the same?

Not what might think at first sight. Back in 2007 my two WeirdBeard co-founders were seriously addicted to playing ‘Wario Ware Smooth Moves!’ for Wii. Wario Ware consists of local multiplayer competition where you compete in bite-size mini games against your friends. In my experience finding out what you should do was often harder than the actual mini game itself. One of the Mini games is called ‘Block Star’. For which you had to use the pose: ‘The Waiter’ in which you balance the Wii-mote on your hand. In this game you have to place falling bricks on a plateau and balance it for a couple of seconds. They loved playing this game but mastered it rather quickly and actually wanted to have longer and more challenging gameplay. So what if the blocks just kept coming? From that idea it took all the way to the end of 2008, when we selected Block Tower from our prototype list to become our next game. R0016 was the prototype that would later become 99 Bricks, the spiritual predecessor of Tricky Towers.

Can you tell us exactly how Tricky Towers will work from a competitive perspective, especially as it seems to be nearly impossible to prevent your tower from falling over? Is there a nuance to the game that players will pick up over time?

Definitely, players have to find a balance between building stable towers and attacking their opponents. Learning how to build stable is the first skill level, you could say. When players get magic spells they have to decide if they will use them to support their own tower or try and mess up other players towers. Skilled players will be able to sometimes use attacks on them to their own advantage, when the cast timing is not done well.

What kind of efforts had to be made to polish the game’s magic spells? Can you tell us about a few of the spells and how they work?

One of the most powerful positive spells is the petrify magic. When cast on a brick this brick will remain rock solid in your tower and never fall over. The trick is to use it at the right brick and place the petrified so that it works as to both stabilize your tower and provide a stable basis to continue building from.

One of my favorite attack spells is mystery brick. This will turn the current brick of you opponents into weird objects. Like a piano, which is much harder to place.

What kind of single player mode will Tricky Towers have? What kind of challenges can players look forward to completing in this?

There are three different types of single player levels. Race, survival and puzzle. The single player missions become more and more challenging as more magic will be cast on you and the tower you have to build must be higher or contain more bricks.

What other modes are in the game besides Survival and Race?

We have the multiplayer puzzle mode, which is a very zen mode. Players have to try and stack as many bricks below a threshold. No time pressure, no attack magic. Just let the architect in you do it’s work. 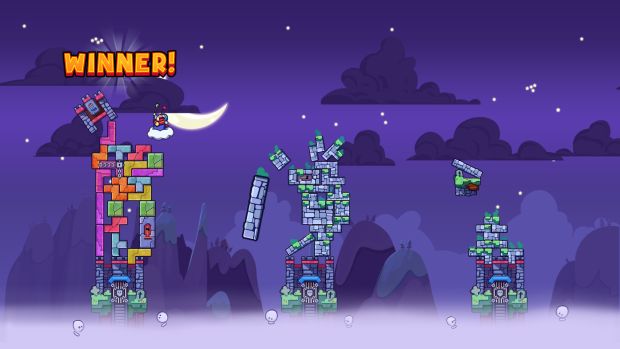 "1080p, yes for sure and 60 fps is always our aim. But having a few hundred physics shapes can be quite tricky."

What are your thoughts on developing for the PS4? Will Tricky Towers be using some of the console’s signature features, like the DualShock 4’s touchpad?

Can’t answer that yet.

Could Tricky Towers arrive on other consoles, like PC and Xbox One, at some point in the future?

PC for sure, we are now in Steam Greenlight.

For that matter, could Tricky Towers possibly arrive on the Vita in the future? It seems like it would be the perfect fit for the handheld, especially considering handheld puzzling classics like Lumines and Meteos that were born on handhelds.

There are no plans for Vita currently, but who knows.

1080p, yes for sure and 60 fps is always our aim. But having a few hundred physics shapes can be quite tricky.

As a developer and a gamer, what are your thoughts on the recent announcement by Sony for PS2 emulation on PS4? Do you think it holds value especially given that a number of games are due for the next year and beyond?

I think it is always nice to be able to play some of the old classics. I myself never owned a PS2 so for me it is great.

Yes definitely, but we’ll have to see from the first reactions after launch what will go first.