These are one killer pair of headsets I have to say right off the bat and they are specifically made for use with the Xbox 360.  There are plenty of features that the Tritton Dolby 7.1 Surround Sound Gears of War headsets have that make them much better than previous Tritton models and other wired headsets out there.  To add to all the new features the headsets have, there is the officially licensed Gears of War artwork on them to make them look amazing even if you are not a fan of the franchise.  The Gears of War branded headsets are also not just your average Tritton headsets with Gears of War art on them as they have elements that other Tritton headsets do not.  They are of course wired, but they probably have the most convenient wired setup I have seen so far for Surround Sound headsets. 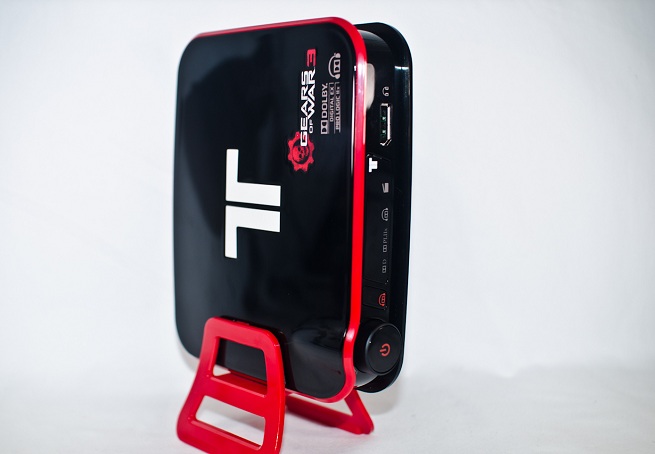 To get something cleared up here, before I dive into the details of the headsets, they are Dolby 7.1 Surround Sound for the Xbox 360.  If you notice on your Xbox 360 audio setting, there is no actual setting for 7.1, but rather 5.1 among other settings.  This does not mean that the Xbox 360 does not support 7.1 Dolby Surround Sound, it just means that not every game supports 7.1 Surround Sound.  So the headsets are really ahead of their time as more and more games will start supporting 7.1 Surround Sound.  So basically you will hear all games that don’t support it in 5.1 Surround Sound, but after using them, even then it still sounds better than a 5.1 headset.  It is basically a plus no matter which way you look at it in these regards, especially considering the price of them being only $179.99 which is an amazing deal.  Now that we got that out of the way, on to some of the awesome features these bad boys have.

I mentioned that the wired setup is the most convenient one I have seen so far and is because you essentially only deal with one wire that is nice and long with a 13 foot reach, which is great if you are playing far away from a real big TV.  This is aside from the small wire that must be connected to your Xbox 360 controller to chat online, which can obviously be unplugged if you don’t planning on talking online.  The same goes for the detachable mic that is super sensitive so you do not need to have it close to your mouth.  People can hear you crystal clear with the mic at a distance however the flexibility of the mic did seem a little awkward compared to other headsets, but it is certainly nothing that would stop me from purchasing this unit.  Within in the one wire, which I must add is braided, making is last longer, giving it more durability and making it harder to get tangled, is the in-line volume control.  From here you can adjust the game volume and separately control the mic volume.  In addition you can also adjust the overall volume on the Digital Audio Control Box.  All of the other wires are conveniently connected from the back of the control box, including the USB power supply and the optical cable both connecting to the back of the Xbox 360. 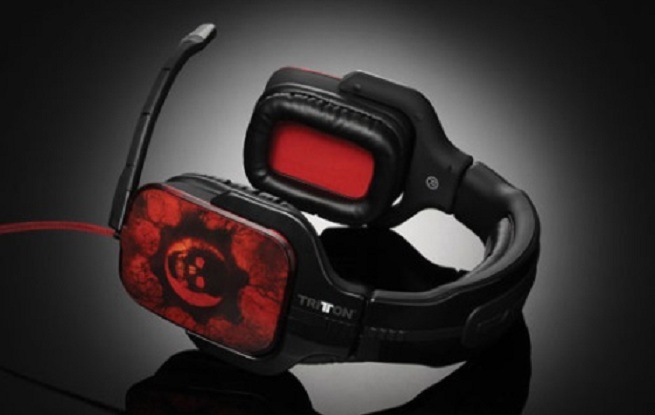 Setup and controlling the whole unit could not be easier and is one aspect that is different from other models.  Of course with the inline audio controller with selectable voice monitoring, you can easily hear your team mates no matter how loud you have the game volume.  You also can hear your own voice just enough through the headsets, which prevents you from feeling the need to scream into the mic if your game volume is loud.  There is also an easily accessible mute switch on the inline audio controller.  There are literally only two buttons on the control box and one of them is the power button with the main volume control as its perimeter.  The other button just toggles through the different modes which either stereo/Dolby Digital Surround Sound, Movie Mode or Music Mode.  It is that easy, and the control box can either lay flat or you can use the included attachment to have it stand straight up, depending on where or how your setup area is.

Moving on the headsets could not be more comfortable as I had worn them for hours on end with out them starting to hurt or annoy me.  This is a big issue with headsets and I am happy to say that these are one comfy, perfectly fitting headsets even with a headrail pad on it as well.  The licensed Gears of War art on the headset only add to how cool they really are.  On each side of the headset, there are Crimson Omen Skulls that gradually glow and blink red, indicating your headsets are on which after seeing them are well.. quite frankly bad ass!  It says Gears of War 3 on top of the head rail as well as the control box.  However just the whole unit being themed black and red make the everything look particularly slick.  As I said before you don’t need to be a fan of Gears of War to appreciate the art of the Headsets and well as the mechanics of it. 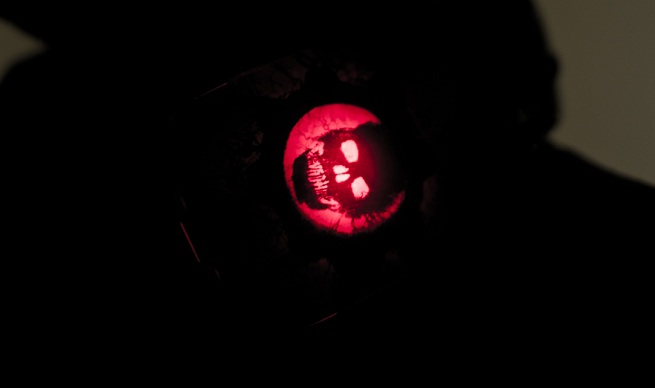 Do your headsets eminate crimson skulls in the dark?

The Tritton Dolby 7.1 Surround Sound Gears of War Headset unit is by far the highest quality wired headset I have used.  Whether you want to watch movies in HD with our waking up people around you or playing your favorite game hearing someone sneaking up behind you, these Tritton units are one hell of a bargain for what you get with it.  You can tell where sounds are coming from on a map to give you the upper hand in a shooter or creep you out even more in a survival horror game.  If you are a dedicated Xbox 360 user these are one pair of headsets that will be the perfect use for you.  At only $179.99 you can’t go wrong with these sleek looking, high quality unit.  International pricing is as follows: $189.99 CA, £169.99 UK, €179.99 FR, €179.99 DE.

Slightly awkward mic boom. Must use with an official Xbox 360 controller.

Final Verdict:
EDITOR’S CHOICE
These are a must have for any Gears of War fan while if you are not a fan, you are still getting one of the coolest looking, highest quality headsets on the market today with a literally plug in and play setup.
A copy of this game was provided by Developer/Publisher/Distributor/PR Agency for review purposes. Click here to know more about our Reviews Policy.