While the Xbox One’s bundled wired headset provides ample audio for one of your ears, gamers who want both ears to benefit from the next gen experience should perhaps turn their attention to the XO Seven headset from Turtle Beach.

A fully licensed headset made specifically for Microsoft’s console, this wireless stereo headset connects to your controller without the need for a decoder box or a nest of cables.

Turtle Beach headsets are synonymous with both build and audio quality – the XO Seven’s don’t disappoint and certainly feel like a premium product, right down to the packaging. 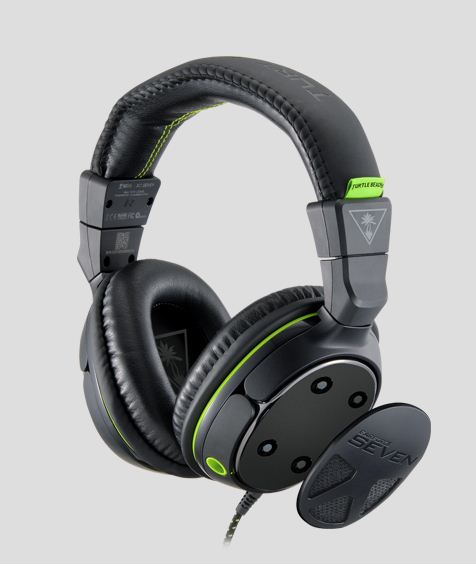 This box of aural goodness conceals the headset, two separate cords (one for the console, another for a mobile device), a USB cable, detachable mic, controller adaptor, quick start guide and a Turtle Beach sticker(!)

Pull off the outer sheathe and you’ll reveal a pure white box emblazoned with the Turtle Beach logo. Class. Lifting the magnetic book-like flap on its side reveals a sleek-looking headset nestling in a cocoon of moulded plastic. The headset itself is pure black, with a dash of trademark Xbox green circling each of the cups. I challenge you not to keep squeezing the super smooth heavily-padded headband, which is stitched along its length and has the words “Turtle Beach” etched on its surface. The band can be extended to accommodate your headsize and the earcups swivel freely and rotate for comfort to rest around the neck when not in use. And if you don’t fancy the all-black look, simply pop off the speaker plates and swap them with alternative brightly coloured decorative decals (not included in the box but available online).

At the base of the left earcup is a short cord measuring roughly five inches long with a pin connector attached at the end. Into this you can plug in one of the longer cables found in the box – one is used to attach the headset either to the Xbox controller adaptor, while the other makes the XO Seven’s usable with any tablet or mobile device. The long braided cord is durable and retains its shape nicely; try as I might, I couldn’t get it to coil up and get in a tangle – a personal bugbear with other headsets. 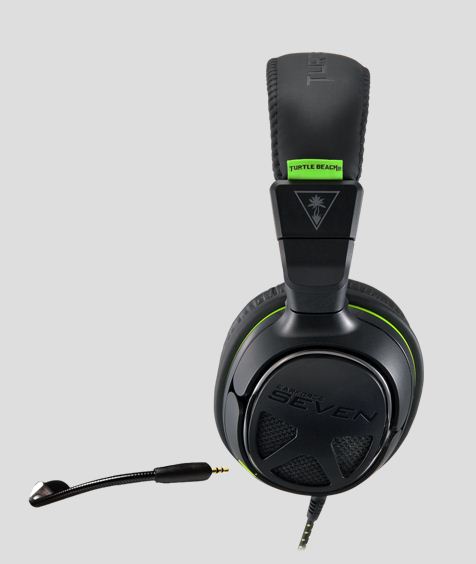 "From the moment you deploy onto the TitanFall battlefield, the yells of comrades and the rasp of gunfire resonate through your earcups. Every sound, no matter how insignificant is captured by the headset, from the lumbering clank of the Titans’ footsteps to the launch of a rocket salvo."

The detachable boom mic attaches to the left earcup by aligning a couple of discreet green dots, and is enormously flexible meaning it can be moulded into whatever position you desire. The noise-cancelling mic provides crystal clear voice chat without being too sensitive so it doesn’t pick up every minute sound in the background. The ability to independently adjust both the voice and game volume through the bundled controller adaptor is fantastic too.

The weight of the XO Seven’s is not insignificant but feels sturdy rather than cumbersome. With these perched atop my head for lengthy periods, besides getting slightly sweaty ears, they’re hugely comfortable. In fact, my ears now feel a little bare when I’m not wearing them.

Setup is ridiculously simple and no power source is required. Insert the mic, connect the cord to the controller and you’re good to go. First time round you’ll have to update the control pad to make sure everything functions properly but the process takes a matter of minutes – just attach the headset to the controller, connect that to the console via the include USB cable and follow the onscreen prompts.

We put the headset through its paces with a few popular – and varied – titles and were impressed by the results.

From the moment you deploy onto the TitanFall battlefield, the yells of comrades and the rasp of gunfire resonate through your earcups. Every sound, no matter how insignificant is captured by the headset, from the lumbering clank of the Titans’ footsteps to the launch of a rocket salvo. Impressive. It should be noted, however, that these won’t much help you pinpoint the direction of your attackers or hear people approaching behind you.

Next up was FIFA 14 – and stepping onto the hallowed turf is an altogether nicer experience with these on your head. The crowd noise erupts around the stadium after a goal, and every kick of the ball delivers a solid-sounding thud. Having played FIFA more than any other game since the console’s launch and knowing my way around the football pitch quite comfortably after all that time, I must admit to have been a little surprised by the number of subtle sounds I was able to hear through the XO Sevens. The satisfying ripple of the net when the ball glides into the top corner is sublime.

Similarly dense rich sound was enjoyed with Forza 5, with its orchestral soundtrack punctuated by the rasp of the engines and screech of the tyres. You’d be hard pushed not to enjoy the well-defined sound of your wheels travelling over the track edge or the scrape of bodywork as you edge past a rival too! 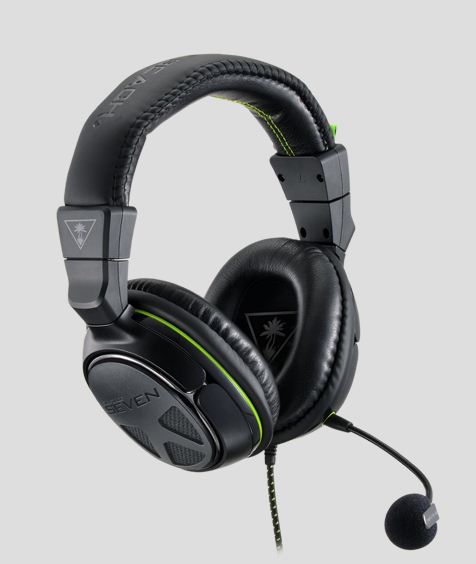 "So what are the downsides? Well, there aren't many - but there’s nothing that allows you to tweak settings to determine whether people are creeping up behind you... and perhaps the biggest flaw is the lack of voice monitoring."

But it’s not just games where the XO Sevens excel; they’re equally adept to capturing sounds when watching movies. Booting up Netflix, they coped very nicely indeed with explosive effects, dialogue and pretty much everything else that my range of film tastes threw up. Perfect for lounging back on the sofa and enjoying the latest blockbuster with the volume ramped up without disturbing others.

So what are the downsides? Well, there aren’t many – but there’s nothing that allows you to tweak settings to determine whether people are creeping up behind you… and perhaps the biggest flaw is the lack of voice monitoring. Chat may be crisp and clear but you can’t hear your own voice while speaking, which is a real shame. Sure it’s great that the earcups cut out all the external noise but it’s very easy to find yourself bellowing down the mic at people and inadvertently disturbing those nearby – particularly annoying for late night gaming sessions!

Connection directly through the controller means batteries will drain a little more quickly too – but this is still preferable to having a raft of cables and having to find a separate power supply… a fair compromise in my opinion.

The XO Sevens are a pleasure to wear, deliver great sound and definitely enhance your gaming enjoyment. If you truly want to fully experience the next gen with the Xbox One, you should seriously consider investing in a pair of these. Sound good? Hell yeah.

Editor’s note: The lack of voice monitoring is due to limitations with Microsoft’s audio adaptor, which does not currently offer the option, and not the headset itself.

Comfortable, easy to use and a treat to have on your head. Top quality build, very few cables and no external power source required.