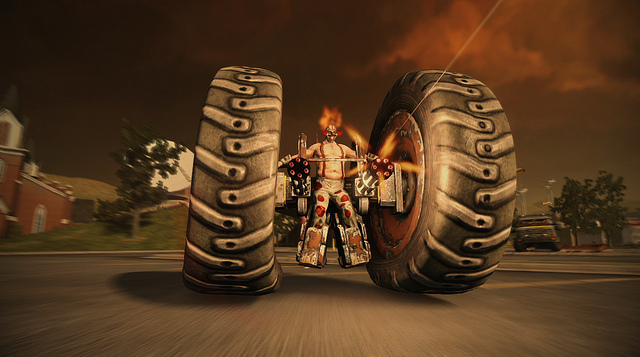 Twisted Metal’s much anticipated release is just around the corner, and with that in mind, developers Eat Sleep Play have revealed the Trophies list for the game.

TMA – Complete story mode without dying or switching cars in the garage.

Any Car Will Do – 50 kills with every car in online ranked games.

Tantric Twised – 50 cars killed by yourself in endurance mode.

Racing? In a Twisted Metal game? – Don’t miss any gates and wind the battle in Race #2, one player only

Another Level – Win 10 ranked games in each map. Map size does not matter.

A la Mode – Win 10 ranked games in each game type.

We buy gold! – Earn a gold medal on every campaign event in any difficulty mode including co op.

…and I thank you for playing Twisted Metal. – Complete story mode on any difficulty.

The One That Got Away – Complete the Sweet Tooth story on any difficulty.

Watch me Shine! – Complete the Doll Face Story on any difficulty.

Grimm’s Dark Trip Back. – Complete Grimm story on any difficulty.

The most dangerous game. – Be the hunted/stay the hunted in ranked, unranked, or split screen local HUNTED GAME MODE for at least 4 minutes.

Because I care – Complete a campaign without hitting a single pedestrian.

Birth Control – Defeat the semi before a single enemy is spawned in Juggernaut DM – Watkyn’s Harbor.

Am I not merciful? – Kill 100 flaming gunners and/or drivers in campaign mode.

Fire in the sky – Shoot down an enemy missile 1 time in a ranked game of NUKE.

That. Just. Happened. – Kill yourself with a freeze cheat shot in ranked SM or LMS, or in any unranked or offline play.

You think this game made itself? – Watch the credits, start to finish.

I h8 poachers. – Finish a ranked game with the most damage done and fewest kills overall.

All Sales are final – Win at least 1 ranked online game per day for 30 days straight.

Right place, right time – Kill a player less than 5 seconds after you respawn, in an online game.

In your face – Hit statue with a nuke.