If you’ve ever watched mixed martial arts on the television and thought it looked easy, here’s the opportunity to see whether your body is up to the task without getting bloodied and battered. UFC Personal Trainer: The Ultimate Fitness System is the latest title to jump on the Kinect exercise bandwagon and offers a slightly more masculine slant on getting healthier compared with the influx of all those Zumba, Biggest Loser and dance games that have proliferated the system since launch. 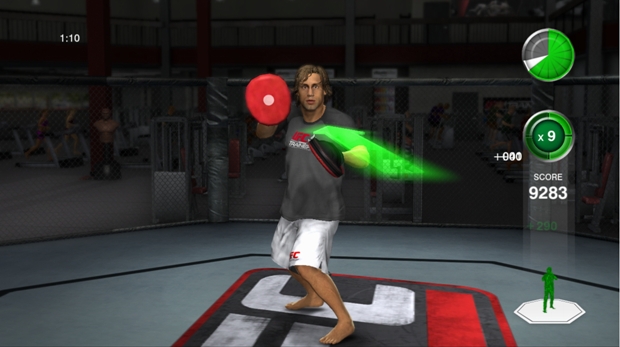 Scrape away the UFC licence, however, and basically this is yet another case of following the onscreen prompts and kicking or punching those calories into submission. It’s debatable whether this should even be classed as a game; certainly, it’s more gruelling than enjoyable – but what it does, it does very well.

After the obligatory menu screens, entering details such as age, height and weight leads you to the introductory fitness test to see what you’re capable of. This consists of a series of sit ups, push ups and jumping jacks, followed by trying to find – and then take – your pulse. From here on in, it’s down to business with various exercises revolving around punch bags, mitts and – winner of the most impractical sounding exercise to be doing in front of your television – tyre flipping! All progress can be monitored through a multitude of tables and charts so there’s no excuse for not shaking off those excess pounds. Your instructor also constantly offers words of encouragement to stop you from slacking, which does help to spur you on when you’re starting to flag. 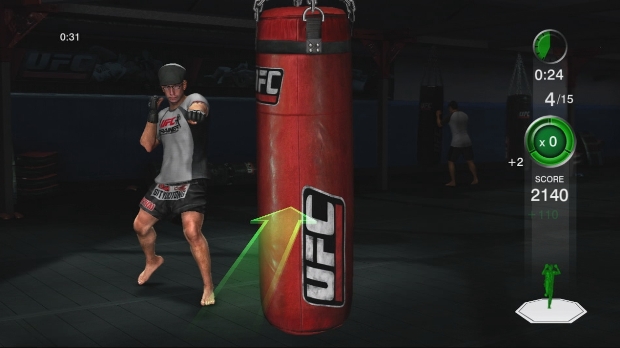 Kick and punch your way to fitness!

Fans of the sport will be right at home as you’re able to train with the likes of Rashad Evans, Jon Jones, Dan Hardy, Frank Mir, Diego Sanchez and Kenny Florian.  And if you’ve had enough of those guys, then why not pick the multiplayer option and challenge one of your friends to a sweat-filled showdown.

Some 70 exercises are crammed onto the disc, with moves from various disciplines such as wrestling, kickboxing and Muay Thai. What’s more, the Kinect edition not only comes with the 51 standard routines but another nine that are exclusive to the 360. All of them have been designed by the National Academy of Sports Medicine and MMA trainers Mark DellaGrotte, Greg Jackson and Javier Mendez so you can rest assured that they will make you fitter if you persist.

You can dive straight into the workouts and training activities or start one of the lengthier programs, which put you through your paces over the course of 30 or 60 days. If you’re finding it all a little too easy, then opt for one of the tougher, more intensive difficulty settings to get that adrenaline pumping. There’s the option to incorporate resistance bands and weights into your routines should you want to make things a little tougher. Stacks of tutorial videos – around 30 minutes – are also available to explain the techniques.

As you’d expect with a Kinect title, the game includes voice command navigation and a full-body tracking system – and the whole thing works well. Having “played” previous fitness releases including Your Shape Fitness Evolved and EA Sports Active 2, I’ll admit I was pretty impressed with how well your actions were conveyed on screen through Kinect’s camera. While admittedly it doesn’t seem as accurate as Your Shape, the fact that ground-based exercises are captured so effectively is a vast improvement on Sports Active’s recent efforts.  Your virtual self is represented in a small octagon in the corner of the screen and kicks, punches and squats are relayed convincingly. As with other Kinect games, some movements are occasionally missed and a little lag sometimes rears its ugly head but not enough to spoil the whole thing. Also, be prepared to clear your room of junk as loads of space is needed for the exercises! 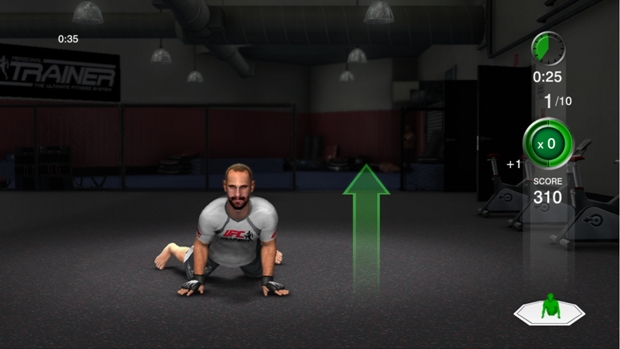 Be prepared… no pain, no gain

The promotional blurb on the back of the box says this can help you achieve a UFC body. I’d be inclined to agree… After a few workouts, I’ve felt absolutely exhausted as though I’d been through several rounds with someone pummelling every muscle in my aching frame. It claims to be the ultimate workout, and should your body be able to take the punishment, it certainly could help you shed a few pounds or tone up. Whether you have only a few minutes to spare or are in it for the long haul, UFC Personal Trainer is a great title – although it will clearly be of greater benefit if you’re happy to knuckle down and commit to one of the exercise programs spanning several weeks. If that sounds like you, then this is certainly recommended. Finally, Kinect appears to be coming of age. And it’s far less embarrassing for us guys to buy than some Zumba game!

Loads of exercises, workouts and programs. Works fairly well with Kinect and over time, it will certainly get you fitter.

Not great to look at - graphics are a little dull. Exercises do get a little repetitive. Not really a game...

Final Verdict:
GOOD
Yet another fitness title but this time it's branded by the UFC. The exercises and workouts are designed by MMA trainers and certainly get the blood pumping. As close as many of us will get to learning some of the techniques and skills from the Octagon... and far less bloody.
A copy of this game was provided by Developer/Publisher/Distributor/PR Agency for review purposes. Click here to know more about our Reviews Policy.