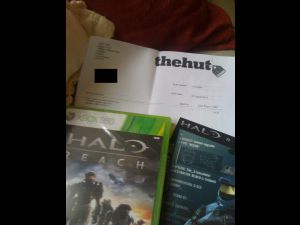 Many of those who had pre-ordered their copies for Microsoft’s upcoming title, Halo: Reach, have already recieved their copies, three days before the game’s official launch. Ricflair (ad several others), a member of the forums of CompterAndVideoGames.com, reported that he has gotten his copy of Halo: Reach, and sent an image of his copy along with his letter from The Hut. The image is given above.

To counter, Bungie have stated that they will be resetting all the in-game Achievements that have been earned till then on 14th September, when the game is first released- officially. Really, Halo: Reach must be the most leaked- leaky?- game ever.

Keep up with our updates, we will have a review of Halo: Reach sooner than later.