We recently got to see an in-engine trailer of Bethesda's Starfield, but what does that brief teaser actually tell us about the game?

Out of all of the highly anticipated AAA games that players have been waiting on for years upon years, Starfield is absolutely in the upper echelon of high expectations, and perpetual postponement. There are few titles that come close to Starfield when it comes to the amount of time passed between its announcement and its launch date, and as such, it’s one of the more notable members of a smaller and smaller club of games that have completely coasted on their elevator pitch – as opposed to what they actually are, for years. It does appear, however, that those days are finally coming to an end. Starfield’s life as an abstract concept that started (at least publicly) with the original trademark being established back in 2013 is wrapping up at this point.

Gamers being given vague impressions on just what Starfield is, and using that as a basis to imagine whatever they want it to be are literally numbered now, and it will soon be a real thing with pros and cons that can actually be judged. We know this because we have gotten a new trailer for the game that dropped during E3 that not only assures us that Starfield is indeed still a thing, but also that we have a timeline for when we should expect to actually get our hands on the game after all this time. On top of that, despite hard details on Starfield still being pretty few and far between, the trailer alludes to a handful of important points that we can logically glean.

As soon as the trailer fires up, we are made aware that the game is being created in Creation Engine 2. The Creation Engine of course was the successor to the set of tools Bethesda Game Studios used for games like Elder Scrolls IV: Oblivion and Fallout 3 which was called Gamebryo at the time. The Creation Engine of course brought us Elder Scrolls V: Skyrim and Fallout 4. Now that this set of tools has long since shown its age and received some fairly consistent criticism from Bethesda fans in recent years, it makes sense that Bethesda would like to let everyone know that they are working with a much newer toolset and thus imply that Starfield will look and play better than some of Bethesda’s more troubled recent releases. It conveys the message that they are aware of the concerns out there and are doing something to address them.

Whether or not this is a real fundamental change in how their games are made or how well the perform at launch is of course yet to be seen, but the mention of the game being made in Creation Engine 2 right at the top of the trailer is at least a commendable signal that they are doing their best to improve things on that front. The graphics in the trailer are supposedly “in-engine” but clearly are still benefiting from ideal lighting, flattering angles, and other things that can be orchestrated for in-engine cut-scenes. That said, it does look quite good with realistic reflections that aren’t overdone as well as lots of detail packed into every visible surface. Everything from random objects sitting on tables to surfaces of complex futuristic equipment look highly detailed and infinitely more realistic than anything that was seen in previous games from Bethesda Game Studios. As with anything, the proof will of course be in the pudding, but it’s nice to at least see an acknowledgement of the appetite for Bethesda to step up their game with visuals.

With so much of the focus of Starfield’s pitch being on its RPG elements, vastness, scope, and scale, you wouldn’t be blamed for thinking the ultimate idea of the game being something similar to No Man’s Sky or Subnautica. This insinuation has been even further projected by Todd Howard himself telling the Washington Post that the game will essentially be “Skyrim in space”. Given this, the genre of the game should be something that roughly fits into the RPG label, but another element of this that we may be missing is the story of Starfield. If you listen closely to what the narrator of the trailer is saying, you hear her talking about the “key to unlocking everything” and lots of grandiose phrases like “we’ve come to the beginning of humanity’s final journey”, all of which seem to suggest that we aren’t just in for a game with a lot to do, but we may also be in for a game with a ton of story and context behind that vast array of options that can propel us forward as players with real motivations and world building like we saw in Fallout 4 and Skyrim.

This is a good sign that Starfield will ultimately end up being a far more well-rounded experience than the games it has been compared to in recent years. The Constellation star-faring group that seems primarily tasked with exploring the great beyond is the focus here, and with the story of Starfield being based 300 years in the future, it’s far enough that Bethesda can take a fair amount of liberties with their fictional technology and other concepts to bridge the gap between what is possible today and what can be done in the game, but it’s also close enough to our time that most of the computers, weapons, suits, and other pieces of equipment are recognizable. Starfield strikes that balance between the futuristic and the familiar in a way that few things do and that also helps with its contextual appeal. 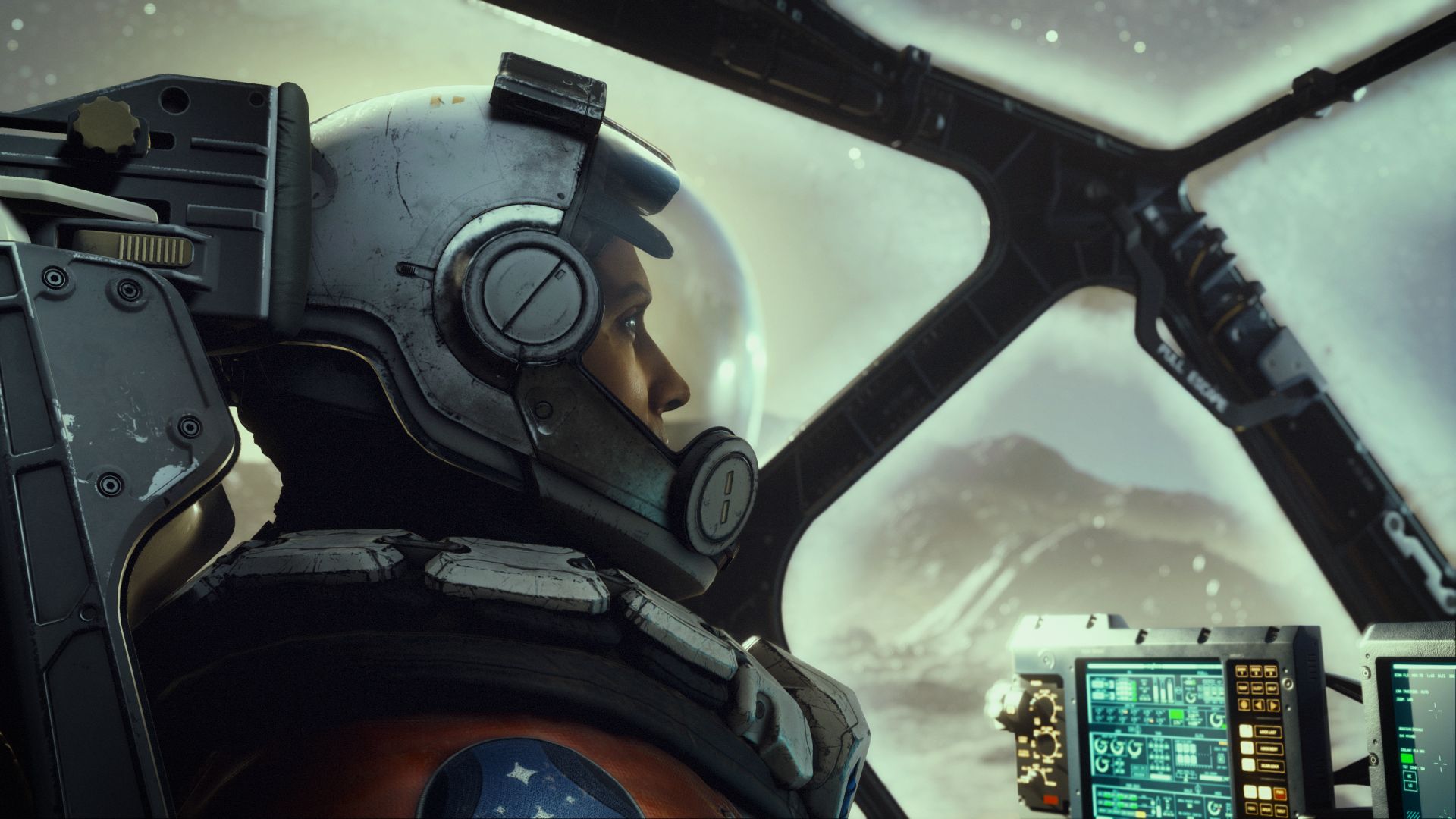 Of course, one of the more salacious crumbs of information we’ve gotten from the trailer is of course the release date of November 11th, 2022. We see this at the very end of course, as the character inputs the numbers into this computer as a clever way of breaking the fourth wall but also informing us that Starfield is finally on the way and it’s not too far off all things considered.

As people continue to pick apart the trailer and reveal new details, we will continue to learn more about the game, albeit within the confines of what can be learned from one short cinematic trailer. Given the amount of time that has passed since the game was announced and now, the appetite for new information is far from satisfied, so we’ll continue to stay on top of this game as more developments inevitably emerge.