E3 this year was a massive disappointment. Microsoft’s conference was a ghostly echo of the one they had last year (which, in turn, was uncomfortably similar to Nintendo’s 2008 conference), Sony’s conference was largely boring with nothing new really announced and too much focus on 3D, although the PS Vita price reveal came in as a pleasant surprise, and Nintendo’s… depending upon which side of the fence you stand on, it was either the best E3 conference we’ve had in years, or a confused, unfocused mess (if you’re like me, it was probably a mixture of both).

Anyway, now that we have the benefit of hindsight, we are going to have a look at all three of the conferences, and decide on who actually ‘won’ E3 this time around. Strap yourselves in. You may not like what’s coming up.

Remember how bad their conference last year was? And how we were hoping this year would be better?

Well, this year was better than last year, but not by much. The good thing was that Microsoft actually spent some time on core games this year (with special emphasis laid on Modern Warfare 3, Gears of War 3, two Halo games and Mass Effect 3). The bad part was that the core games made up roughly twenty minutes of Microsoft’ conference, and the rest of it all was spent on Kinect. Hell, even ‘core’ games like Mass Effect 3 and Tom Clancy’s Ghost Recon were demoed primarily to show off the Kinect.

At least Mass Effect 3 and Ghost Recon escaped with only minor, optional Kinect integration though. If you’re a core gamer, your heart must surely have cried out when you learnt that franchises like Fable were being reworked to the point of being dumbed down for the asinine, just so that they would work on the Kinect. 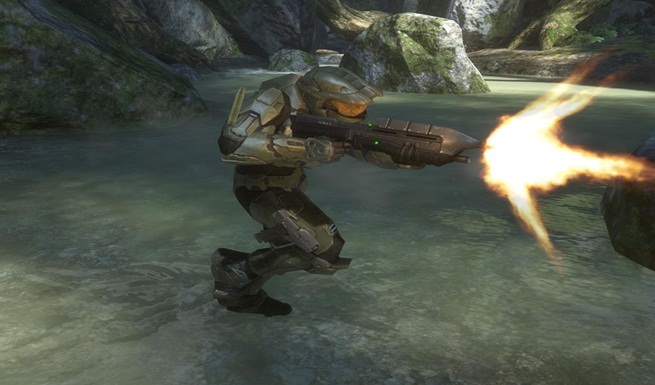 The unveiling of Halo: Combat Evolved Anniversary and Halo 4 were the highlights of Microsoft's conference... actually, they were the only good parts of the conference.

Worse than that. Remember Codename Kingdoms? The really neat Crytek exclusive that Microsoft teased at last year’s E3, the one game that we were hoping would be the start of a new Xbox exclusive IP that would showcase the system’s graphical potential. Turns out that is also a Kinect game. Developed by Crytek. My heart sank when that was confirmed on stage.

This isn’t even going into the ridiculous Kinect games, like Star Wars Kinect and Sesame Street, that were demoed on stage. I think I died a little on the inside when they were demoing Disneyland Adventures, actually. Sure, those games look great for the casual audience… but why are they being demoed at a conference meant for hardcore gamers? Nintendo was criticized heavily for this in 2008, did Microsoft not do its homework? Two years running, and all we get is Kinect crap. I can understand that Microsoft needs to justify the rather pricey purchase of the peripheral that over 10 million people have made, but… why not just have a separate Kinect focused conference, and keep E3 for the hardcore games?

Maybe they’ll take the hint and do that next year. As it stands now, Mirosoft’s E3 was a nightmare I’d like to forget. Entirely.