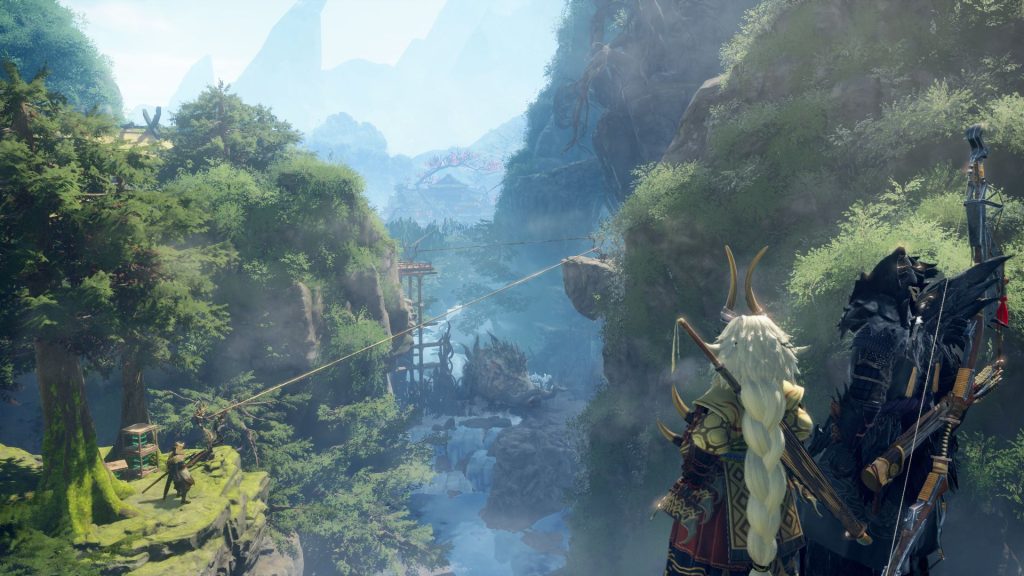 With all of the games that Koei Tecmo has in development, it’s interesting to see Omega Force teaming with Electronic Arts for a new hunting game. WILD HEARTS is set in a fantasy Feudal Japan region called Azuma, where players hunt the Kemono. To the surprise of very few, it’s not an open-world title.

Directors Kotaro Hirata and Takuto Edagawa spoke to IGN and clarified that it uses a zone-based structure. Edagawa said they believe this has “significant advantages in a hunting game in which the player repeatedly hunts. Each separated zone is a large area, and players can reach almost any point in a zone using Karakuri, so it is possible to enjoy it like an open world game in which you actively explore the world.” It sounds more akin to Monster Hunter World in terms of zone size compared to, say, Monster Hunter Rise, but time will tell.

Hirata also provided more context on the Karakuri, which is used to build different structures and weapons for use in hunts. And no, it’s not quite like Fortnite.

“Players hunt using a type of crafting called Karakuri, an ancient technology that allows for the creation of extremely flexible and creative hunting grounds to take on powerful beasts. Karakuri can range from types that can be built instantly during battle, to some that can be combined to create new Karakuri, and also types that are used to build hunting grounds by utilizing many different materials.

“Karakuri expands the freedom and possibilities of hunting combat and exploration in this game, so it differs from the direction of crafting in Fortnite, which allows for the creation of huge structures.”

As for why WILD HEARTS is only coming to current-gen consoles and not PS4 and Xbox One, Hirata said that maximizing the performance of current platforms was necessary to make the world “more compelling.”

“We believe that the fantastic and unique worldview inspired by feudal Japan is one of the key aspects of WILD HEARTS. To make the world more compelling, we felt it was necessary to maximize the performance of the current platforms. Specifically, we have improved the atmosphere by incorporating more accurate indirect light and increased density by placing higher resolution fields, Kemono, and objects in the game.

“With WILD HEARTS, we embraced the challenge of using new technology. We hope that players will use Karakuri to freely move around in the colorful and expansive world that we have created.”

WILD HEARTS releases on February 17th, 2023, for Xbox Series X/S, PS5, and PC via Steam, Origin, and Epic Games Store for $69.99. It features cross-platform play and has been in development for four years if taking the conception and planning stages into account. Stay tuned for more details and gameplay in the coming months.