Dominions vs. Exiles…and everybody wins in this under-hyped but supremely entertaining MMO.

It’s hard to even begin with WildStar, Carbine Studios’ first game and a sci-fi MMORPG set on the planet Nexus against the war between Exiles and the Dominion. The amount of talent coveted to create this game spans some of the most significant games of the past decade, from World of Warcraft to Metroid Prime, Half Life 2 to Everquest and Fallout (and no, not people who worked on Fallout 4, so don’t even think about asking). What is your big ticket into WildStar then? What is the immediate hook that draws you into this immense spanning world of alien flora and fauna?

Perhaps that it’s super serious while not asking you to take things so seriously. That and the all-encompassing atmosphere of adventure, raucous animated abandon and pure fun that dictates this all too grave war. 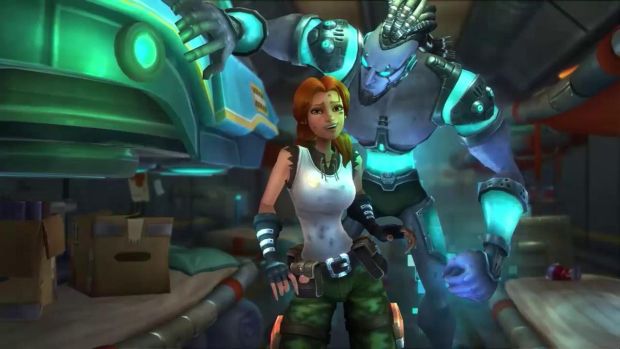 "Playing on the Exile side, you're introduced to a motley set of characters fairly quickly and while they may not immediately captivate you, they grow on you quickly."

Essentially, WildStar is an MMORPG like World of Warcraft, who’s artistic style and gameplay quests you’ll immediately be reminded of. However, WildStar packs so much nuance and identity into its visuals and visualization, with its characters bounding to life from the get-go. You play as either an Exile or Dominion citizen that is engaged in battle with the other side. For the Exiles, this means trying to survive long enough to eventually make it to the surface of Nexus, an indigenous planet full of wild Ravagers and mutant plant life. The objective? Find the ancient technology of The Eldan and put a stop to the Dominion once and for all.

Playing on the Exile side, you’re introduced to a motley set of characters fairly quickly and while they may not immediately captivate you, they grow on you quickly. From there, it’s fighting off the evil Dominion soldiers trying to board your base ship before heading to Nexus, meeting the Elderoot, fighting widespread forest fires, bashing up slave trader cartels and…the list goes on really.

Like any self-respecting MMO, WildStar allows for a variety of classes. You can pick the tough as nails Warrior for maximum sword swinging or dual wield as a Spellslinger. Maybe you like killing stuff with psychokinetic powers? The Esper’s got you covered. Even the Medics in the game aren’t meant to be taken lightly as they can literally microwave an enemy’s insides. Further expanding on these classes, for which you can choose different races (and these races vary depending on which side you choose), there are different Paths to pursue.

Paths are additional missions which lend different benefits to your class – for example, the Soldier path offers the Bailout ability to help you run in the midst of combat. For the less combat minded, there are Paths for discovering new places, setting up different settlements and much more. 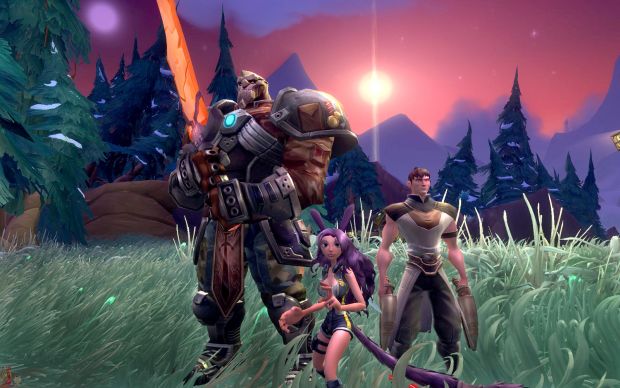 "This all sounds fine and dandy but what exactly can you do in WildStar? The real question would be to ask what you can't do."

But what really set WildStar and its varying classes/abilities apart is the combat. Unlike other MMOs, WildStar takes a decidedly dynamic approach to real-time combat with Telegraphs. Each attack you perform has a shaded area that indicates its hit radius. This applies for normal as well and special attacks – any enemies that fall within that area will fall prey to your attacks. Likewise, enemies will have Telegraphs for their own attacks. This is where things get interesting as you can see these Telegraphs and effectively dodge enemy attacks.

These Telegraphs are decidedly complex – it’s not simply a matter of observing and dodging. Sometimes you may need to dodge just so you don’t take the brunt of the attack or the full combo. You can also cancel an enemy’s attacks with knockdowns and grapples, and the Telegraph system tells you just the right time to hit them (you can also adjust your own Telegraphs by holding the ability key down and positioning yourself carefully). It’s an incredibly addictive system that helps alleviate much of the monotony of combat. It also puts battles down to skill as much as statistics – you being more powerful than an enemy will mean nothing if you don’t correctly react to his Telegraphs and take advantage of your own.

This all sounds fine and dandy but what exactly can you do in WildStar? The real question would be to ask what you can’t do. There are story-based Adventures to embark on with friends to amass powerful loot; dangerous Bounties to kill and high-powered bosses to beat; oodles and oodles of side-quests and missions, not including the different Path missions; Hobbies like cooking, crafting and mining which allow you to further customize what your character can create and equip; the ability to customize your own Home Base, which is almost a separate game unto itself; PvP combat; and don’t even get us started on end-game content like the 20-person Raids full of numerous sub-bosses and bosses with Telegraphs for days. Nexus itself comes to life in amazing detail with plenty of lore, information, characters and back-story to explore…or not, if you’re just interested in hitting things. Rest assured there are plenty of things to hit. 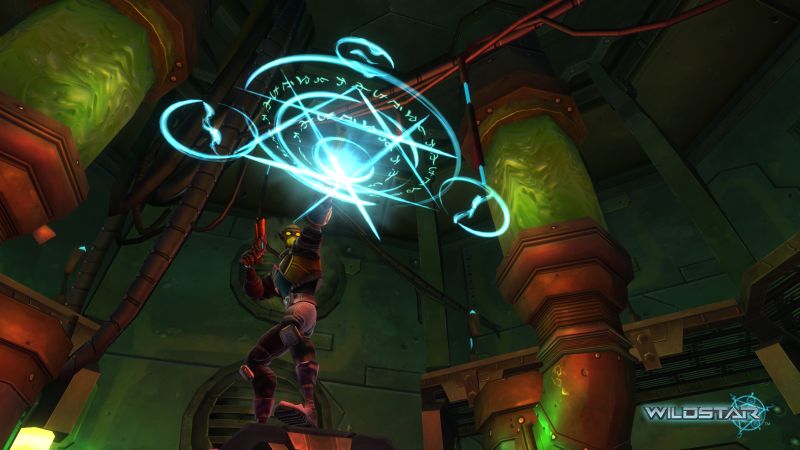 The cartoony style of WildStar may turn some players off but compared to the dull, grimy visuals of The Elder Scrolls Online, it’s an excellent aesthetic choice. Mountains and aurora borealis come to life in startling detail with ample particle effects, detailed animations and beautiful character designs. It also fits the adventurous, Treasure Planet-feel of the game – the battles in WildStar are darker than the little forest critters armed with plasma guns will lead on. Even as you scrounge the planet, murdering anything that opposes you, you can’t help but feel that you’re just trespassing on a peaceful planet once inhabited by powerful beings that is all but subject to your petty war.

Enough can’t be said about the game’s soundtrack as well, which goes the full symphonic route and changes dynamically depending on the atmosphere. One moment you could be walking through the woods, collecting fireflies as the forest seemingly sings a little jig, and the next you’re racing to a pounding score, struggling to reach your objective in time.

WildStar isn’t for everybody but that’s only because the MMORPG genre itself isn’t for everybody. This isn’t to say that Carbine Studios’ magnum opus falls prey to too many of the genre’s imperfections though. If anything, it skillfully navigates around them while bringing out their best strengths to deliver a compelling experience. If you’ve always wanted a sprawling online adventure full of loot and pretty locales to do whatever – and we really mean whatever – you please while fighting like a bad-ass in the process, WildStar’s got what you need.

Excellent production values offering a vivid animated art style and epic soundtrack. Addictive gameplay and combat. A ton of content you'll only begin to scratch the surface of (with more on the way).

Some server issues and game glitches. Not suited for some. Some quests can be tedious at times.

WildStar may look cute and colourful...and it is. But it's also an enriching experience that's chock-full of content and character. If you can splurge on the subscription, then Nexus is well worth the trip.

A copy of this game was provided by developer/publisher for review purposes. Click here to know more about our Reviews Policy.
Tagged With: Carbine Studios, NCsoft, pc, subscription, WildStar