And it’s a long, long way off from being in Windows 7’s league.

The unpopularity of Windows 8 has ironically been a pretty popular topic as of late. From the much loathed Metro interface, that was later adjusted, to the multitude of devices that started shipping with Microsoft’s newest and sleekest OS, it’s been in tech headlines for the better part of 2012. However, that doesn’t mean it’s proven very popular according to KitGuru and data from Net Applications.

A chart from the latter compares the uptake of Windows 8 versus Windows 7 and Vista (the OS people loathed before Win8). Net Applications monitors operating system usage by looking at the OS version of users who access around 40,000 sites it monitors for its clients. 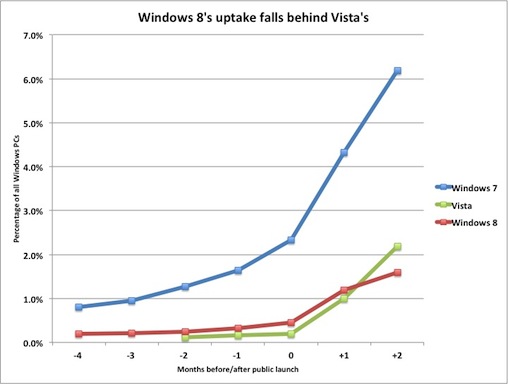 Within the same amount of time, Windows 8 usage uptake has somehow slipped behind Vista in the same point in its release. Windows 8 online usage share is around 1.6 percent of all Windows PCs, whereas Vista had a 2.2 percent share in the same period two months after release.

While it doesn’t spell the end of the OS, it must be more than a little worrying for Microsoft when your most-loathed OS in history did better than your so-called revolutionary one.