This spin-off struggles to prove its worth.

Wolfenstein: Cyberpilot acts as a companion game to Wolfenstein: Youngblood, and though they released on the same day, they’re vastly different experiences. While the intense co-op in Youngblood sticks relatively close to the traditional Wolfenstein gameplay formula with some new RPG-lite mechanics and a solid 15-hour story, Cyberpilot feels more akin to a tech demo meant to showcase what the series might look like as a VR experience. The problem is that it never makes a good case as to why it should even bother to exist in its current form.

Cyberpilot’s campaign (if you can call it that) clocks in at under 2 hours, much of which is spent outside of the repurposed Nazi robots the game touts as its selling point. Before you get to make your way to any of the fun, Cyberpilot weighs the experience down with very obvious padding that sees you pulling various levers, pressing buttons, and swapping out chips on the Nazi robots before missions. One such segment has you swinging the Zitadelle around and removing pieces of shrapnel before you can finally move on to the mission, while another has you snapping a few pieces together on a gun before attaching it to a drone. And while these side-activities aren’t offensive independently, they serve to showcase just how little content Cyberpilot actually offers. Beyond these pre-mission activities, you spend less than an hour actually piloting the robots. 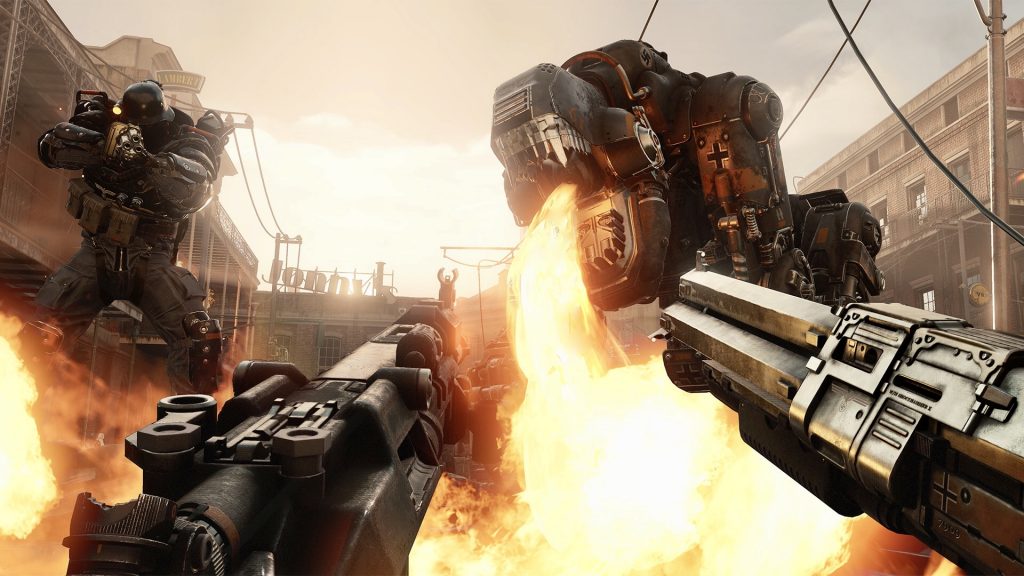 "Moving forward or backward is very smooth, but looking right or left is done through snapping, causing a noticeable clipping effect."

Once you push past the padding, you do eventually get to pilot a mechanical dog called a Panzerhund, a small hacking drone, and a giant mech called a Zitadelle. Each has their own brief tutorial and a short mission, and then a final mission brings them all together for about ten minutes worth of additional gameplay. Luckily, these snappy little missions are definitely the best of what Cyberpilot has to offer, but that’s not to say they’re all particularly compelling either.

Each robot has two main abilities assigned to L2 and R2 and a third special ability that is performed by hitting a button to the left of your vision in-game. Additionally, by moving the controller a bit to the right, you can attach it to healing connection and watch as a group of drones descend from above and fix up any damage you’ve taken. Having this little snap-in so close to the general aiming area sometimes caused me to accidentally connect to it and begin healing during a shootout, however, creating a lot of frustration and forcing me to hold my controller awkwardly to the left a bit to avoid it.

You’re free to look around at the destroyed Neu-Paris as you walk through its impressively-detailed areas, and the game features mostly fluid locomotion. Moving forward or backward is very smooth, but looking right or left is done through snapping, causing a noticeable clipping effect. It’s a common camera control choice in VR games, and while it’s not that big of a deal, it’s nevertheless immersion-breaking. Still, considering how many VR games opt for teleportation, I was happy to see that I had freedom to move about in a mostly fluid manner.

Each mission offers a quick romp through a section of Neu-Paris, with perhaps the least enjoyable and most straight-forward being the first of the three – the Panzerhund. I had hoped to feel powerful as I wreaked havoc with the Panzerhund, especially since their presence in the core series is usually one worth fearing. But despite its flamethrower and forward dash ability, the mechanical canine never feels all that good to play. Movement is extremely slow, and since the game’s enemies essentially just stand still and let you kill them, it all ends up feeling bland and uninspired. Seeing as the Panzerhund mission is easily the shortest of the bunch and it’s barely used during the final mission, it’s not unrealistic to assume that the developers were well aware that this was the weakest of the bunch.

Luckily, it’s all over within a few minutes and you’re soon tasked with building a zapping gun to attaching to a small drone. The mission that follows is probably Cyberpilot’s best, opting for a stealth-oriented focus as you fly effortlessly through an interior of a building hacking computers and disintegrating Nazis. The special cloaking ability allows for a bit of leeway to the already forgiving navigation and AI, and sneaking up behind a group of Nazis too explode them with a zap is satisfying. The quick and simple hacking mini-game is used repetitively, but it at least engages you by having you twist and turn your controller and then hold it at the right spot much like unlocking a master lock in real life.

"If you’re itching for a good time with a Wolfenstein game, you’re better off snagging Youngblood and skipping over this tech demo."

The Zitadelle is probably the most traditional of the robots, and its mission is mostly just pure destruction. It’s simple but effective, and blowing up giant mechs with your machinegun and rockets feels good in action. A shield ability rounds things out, but I honestly forgot to even use it thanks to the fact that you can usually just stand still and heal in the open as needed thanks to the aforementioned brain-dead AI. I enjoyed little features like shooting down zeppelins from the sky, and the resulting explosion and descent are visual treats in VR.

But like all of the missions, it’s all over just as you get comfortable with the controls and feel zoned in, and the finale wraps up just as quickly, leaving you with the feeling that you just played through a tutorial. What little narrative ties it all together is doled out through forgettable dialogue over a com, but while it’s all fairly barebones, I at least respected the way it ties one of the main missions so tightly to a latter area of Youngblood, all the way down to layout of the level itself.

There are no collectibles to uncover, no side-missions to undertake, and the three difficulties don’t really change the fact that the game is a breeze to power through in a single sitting. A couple of trophies on its short list to the platinum offer a bit of incentive to replay missions if you’re a trophy hunter, but for the rest of us there’s literally nothing else to do.

All of this leaves Cyberpilot feeling unnecessary in every way. I can’t help but feel like the game could’ve functioned much better as either an add-on for a core entry in the series or a tutorial for a longer experience. As it stands, even the asking price of $19.99 feels a little pricey for what you’re getting from Cyberpilot. If you’re itching for a good time with a Wolfenstein game, you’re better off snagging Youngblood and skipping over this tech demo.

Final Verdict:
AVERAGE
There is some fun to be had piloting the robots in Cyberpilot, but the mission brevity and padding really dampens the experience and steals away control right as you’re settling into a groove. There are worse ways to spend a few hours of your day, but there are much better ones too.
A copy of this game was provided by Developer/Publisher/Distributor/PR Agency for review purposes. Click here to know more about our Reviews Policy.