Wolfenstein The Old Blood Visual Analysis: Xbox One vs. PS4 vs. PC

When MachineGames first released Wolfenstein: The New Order, it set out to achieve one thing above all else – constant 60 frames per second gameplay. The game itself boasted a new aesthetic, updating Wolfenstein’s Nazi-killing, sci-fi/WWII era grittiness for a new generation of gamers. The aesthetic also employed its fair amount of grindhouse cheesiness, as evident by the over-the-top gory violence and stereotypically sinister Nazi enemies to say nothing about the muscular, straight-edge, one-man-army soldier. The Old Blood is pretty much the same in that aesthetic and approach. In fact, after reviewing the expansion, it’s fairly obvious that several assets have been reused and re-employed in different ways.

But id Tech 5, the engine powering The New Order, has been around since Rage’s release 2011. The engine was marketed on the basis of its texture streaming technology, namely Virtual Texturing, which allowed developers to stream texture into memory automatically. It also employed shadow maps to lend soft edges to shadows (the specific phenomenon known as “penumbra”), screen space reflections, soft particles and a number of graphical effects and post processing. With Wolfenstein: The New Order, id Tech 5 would often see resolution drops on PS4 and Xbox One in order to accommodate a constant 60 FPS frame rate.

Wolfenstein: The Old Blood has released only on the PS4, Xbox One and PC though, skipping the previous gen entirely. How does it fare with its performance and has MachineGames managed to tap into the extra power of current gen hardware to bolster the resolution along with the constant frame rate?

On analyzing the PS4 and Xbox One versions, we noted a dynamic buffer being used for the horizontal resolution. This is the chief reason why the game enjoys a nearly stable 60 FPS frame rate, and results in dynamic resolution scaling for both consoles. Thankfully, the Xbox One version dynamically scales slightly more than the PS4, the latter sticking to its native 1080p resolution at most times. There’s still a fair amount of dynamic scaling in both versions and it’s not necessarily a new concept, especially for the Xbox One. Many games like Call of Duty: Advanced Warfare and most recently, The Witcher 3: Wild Hunt used dynamic resolution scaling to ensure a sold frame rate. This practice typically relies on the number of free resources the console has at a time. The key difference here is that even though The Witcher 3 was running at 30 FPS, it managed to stick to 1080p resolution on the Xbox One in cut scenes. Wolfenstein: The Old Blood sees dynamic scaling in its resolution for both gameplay and cut scenes.

It’s interesting to note the noisy grain filter used in The Old Blood. Like The New Order, it lent a historical feel to the game and brought the grittiness of the action all the more. However, it also served to mask some of the anti-aliasing issues and resolution shifts in The New Order. The Old Blood may have improved the resolution scaling somewhat but the anti-aliasing on consoles is still pretty limited. You’ll of course see more jaggies on the Xbox One but both versions suffer from the same. Shadow dithering also occurs at times but there’s less roughness to edges in the PS4 version.

The vaunted 60 frames per second performance holds up in the console versions at least. The PS4 version succeeds in maintaining its 60 FPS frame rate but the Xbox One version isn’t too different. As it stands, the differences in frames per second for gameplay are fairly insignificant across both versions. It’s also worth noting that alpha effects, volumetric effects, physics, particles and such are similar across both console versions.

As stated before though, id Tech 5’s main calling card is Virtual Texture which can support Mega Textures with resolutions up to 128,000 x 128,000. So even though all versions of Wolfenstein: The Old Blood suffer from Mega Texture streaming issues, there’s at least some means to remedy it i.e. to have a bigger HDD. That being said, we observed more problematic texture streaming on the Xbox One version compared to the PS4 with some textures loading slightly later and resulting in a dithered visual experience. 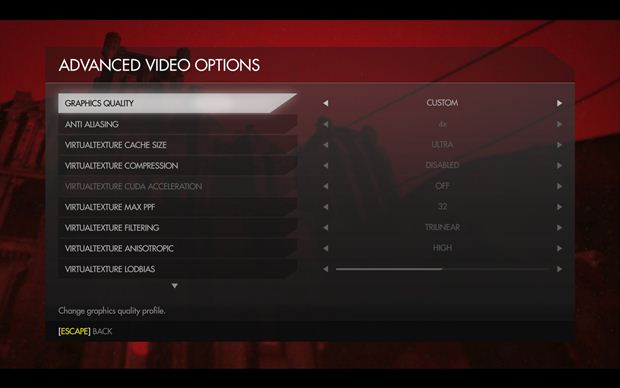 Moving on to the PC version, it’s capable of running at a constant 60 FPS with a 1080p resolution. Along with better anti-aliasing than the console versions (and much improved over The New Order), it also delivers better effects and transparency. MachineGames may not have messed around too much with its assets and visual design but it’s certainly offered a lot more graphical options for the PC version of Wolfenstein: The Old Blood.

The graphical options are indicated below:

We tested the PC version on a number of different GPUs with an Intel Core i7-5960X and 16 GB RAM with all settings maxed out. Frame rate performance is as follows:

The PC version is clearly the victor here. Not only does it benefit from a wider range of graphical options and better performance but it also boasts better anti-aliasing, particle and alpha effects and a 1080p resolution that isn’t subject to dynamic scaling. The PS4 version does come in close at second place though since it manages better texture streaming, a more stable native 1080p resolution and near constant 60 FPS performance compared to the Xbox One version.