Head to head comparison between all leading platforms of Wolfenstein Youngblood.

When Wolfenstein Youngblood came out last week, almost no one noticed. It was oddly quiet launch for a Bethesda-published title. Even Android/iOS port of Doom got more attention in the press (although, to be honest, a lot of that was down to the whole Bethesda.net login controversy.)

That doesn’t change the fact that Youngblood is a okay coop shooter and a full-fat addition to the Wolfenstein franchise. But do note that it has its issues which we have outlined in our review previously.

The game itself is decent but we’re focusing here on the technical aspects. Let’s dive in.

PS4 Pro vs PC vs Xbox One X Head to Head Comparison:

Youngblood scales significantly across different platforms, in terms of both visuals and performance. Let’s take a look now at how it runs on the different consoles.

Dynamic resolution scaling is back in Youngblood and it’s the key to getting the game running at at least a decent approximation of 60 FPS on the consoles. PS4 Pro and Xbox One X are quite a bit closer in image quality than in The New Colossus. The earlier Wolfenstein game had a vast gulf in IQ between the two platforms. Xbox One X topped out at 4K while the Pro often struggled to maintain 1440p. Here, 1440p is the baseline for both enhanced platforms. On default settings, the Xbox One X, of course, holds this much better than PS4 Pro. The Pro frequently dips below and both look passable on a 4K display, largely thanks to TSSAA smoothing the image out so well.

Three resolution scaling options are available on both consoles: normal, aggressive, and off. It’s critical to note here that none of these settings actually results in a locked  60 FPS experience. On the console front, we analyzed the game’s performance by taking some sample scenes from the game and running it through trdrop, an open source software. Note that this tool gives us a mere demonstration of the game’s performance, because an exact 1:1 representation of performance can only be provided by the developers themselves since they have access to vast of array of tools and profilers.

Resolution jump arounds the native 1440p mark and we’re in 50-60 FPS territory on both platforms when dynamic scaling is switched to normal or aggressive. However, aggressive resolution scaling helps keep the framerate closer to 60 and disabling it entirely causes performance to bog down a bit in intense scenes. We must note that the PS4 Pro is much closer to 60fps compared to Xbox One X when we switched on the aggressive mode. When we switched off the resolution scaler, performance on both platforms was erratic but it was once again higher on PS4 Pro. 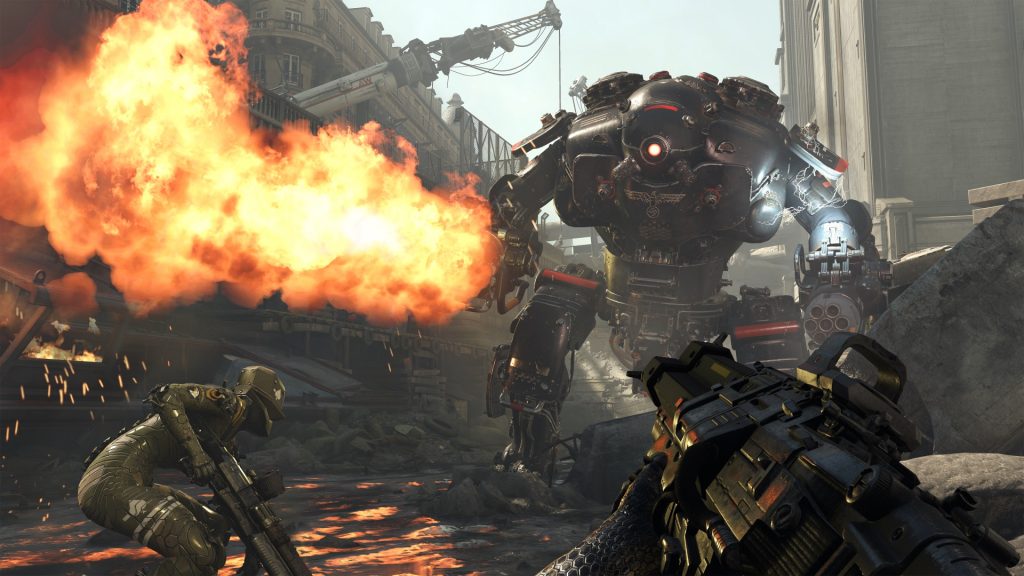 One peculiar performance quirk we noticed was that performance tends to dip the closer enemies get. This could be due to issues with how the game handles LODs or it could simply be down to a greater number of particles being pumped out in close-up firefights. Once again, the drop in frame rate during these sequences was much more noticeable on the Xbox One X compared to the PS4 Pro.

While performance isn’t ideal on enhanced consoles, you will need to play on PC to experience this game at a consistent, locked 60. Our test PC includes a GTX 1080Ti, 16GB of GDDR4 memory and Ryzen 1700 CPU. Youngblood features a reasonable amount of graphical settings including but not limited to the likes of anti-aliasing, lighting, shadows, particles, depth of field, sharpening and water quality. We absolutely had no issues hitting 60 FPS without slowdown. This is a big step up from the inconsistent 60fps output from both consoles.

The PC version also excels in other graphical areas like character detailing and anti-aliasing. I guess, it goes without saying that who is the winner here in terms of performance and graphical prowess.

In some ways, Wolfenstein Youngblood is both the most and least interesting game we’ve seen yet on the idTech 6 platform. Why do we say this? Because, for starters, there are no significant technical advances over and above what we saw in The New Colossus. We’ll have to wait for idTech 7 and Doom Eternal to see the new stuff id’s been working on there, especially the larger-scale maps and higher-fidelity models. Youngblood, instead, deploys the exact same tech we saw two years ago in The New Colossus. This isn’t a bad thing at all, granted. The New Colossus was one of the best-looking 60 FPS titles on console at launch, arguably topping Doom in visual panache while maintaining that silky smooth framerate.

This isn’t to say that Youngblood doesn’t move the visual dial forward at all. Nvidia’s managed to get id on the ray-tracing wagon. This means that RTX owners are in for a ray-traced treat once Youngblood’s post-launch ray-tracing patch comes out. Youngblood will feature RTX reflections a la Battlefield V and while that’s not exactly a life-changing enhancement, it’s still good to have. And it’ll make Youngblood the most visually appealing idTech 6 game released so far.

So what exactly has stayed the same and what’s changed from Wolfenstein 2 to Youngblood? 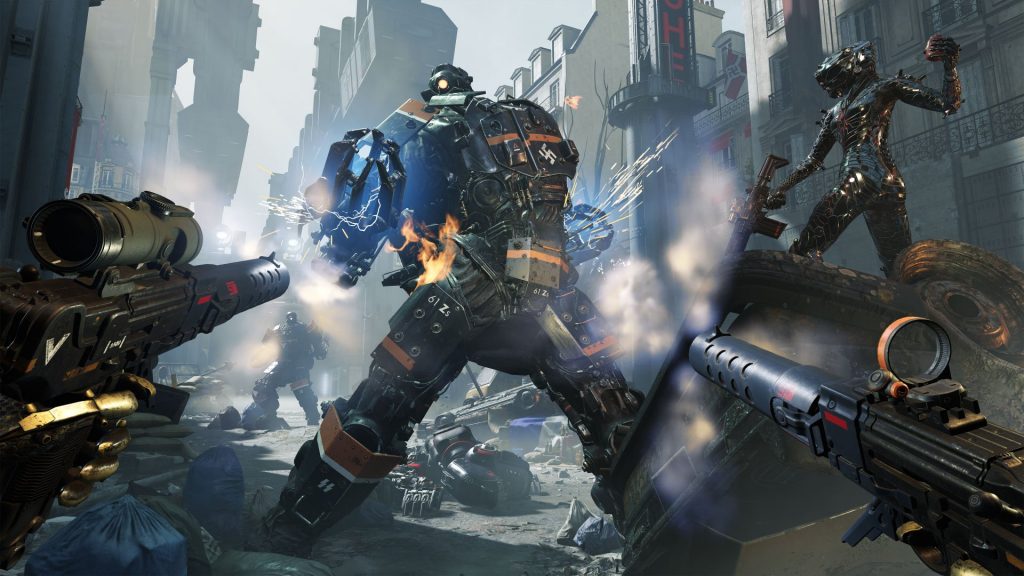 All of idTech 6’s key engine features are retained here, of course. Youngblood makes use of iDTech 6’s clustered forward rendering approach for lighting. This looks just as good here as it does in The New Colossus and in Doom. Clustered forward rendering gives developers the best of both worlds: the large number of dynamic lights possible in a deferred renderer, and the exceptional performance of a forward renderer. Most light sources here are dynamic and this greatly contributes to Youngblood’s visual makeup, especially in indoor scenes. There are a lot of indoor areas with harsh spotlighting and glossy materials: the dynamic lighting and physically-based material rendering in use go hand in hand to convincingly create that science-fantasy techno-sheen.

As mentioned, physically-based material rendering is deployed to great effect here. Many of the surfaces in Youngblood’s urban environments have high glossiness and metallicity. The material rendering pipeline accurately depicts these characteristics. Extensive use of screen-space reflections makes these surfaces even more convincing. When the RTX patch comes out, ray-traced reflections will be added to the game. This will add greater dynamism to indoor environments. We’d venture to guess that reflections in Youngblood’s indoor areas would resemble what’s been shown off in the Control trailers: they go above and beyond what’s possible in screenspace and drastically transform the scene.

idTech 6 leans heavily on particle effects and they do not disappoint here. Particle volumes receive lighting and shadow, making for impressive gunfights and explosions, particularly in well-illuminated areas. Colored lighting affects particle volumes. This is particularly noticeable with explosions that occur next to colored lights, such as alarms: the red tint of the light passes on to the particle mass, lending it a real sense of volume. 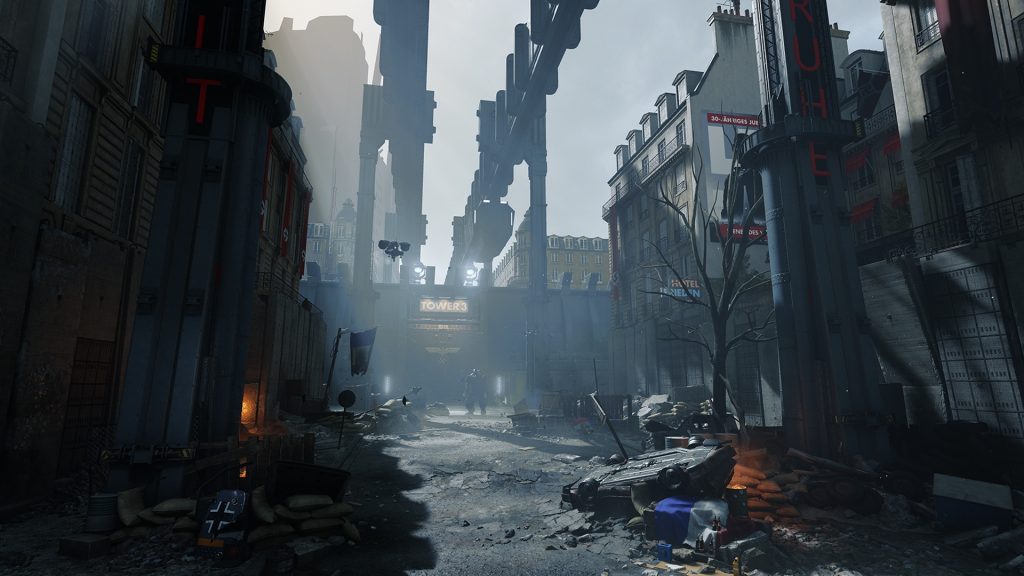 The post-process suite in Youngblood also makes complete use of the idTech 6 toolkit. You have the signature temporal supersampling AA (TSSAA), which trades a hint of softness for incredible anti-aliasing coverage. Because Youngblood makes use of dynamic resolution scaling on consoles, TSSAA is crucial to maintaining a consistent image in the heat of action where the framerate and resolution can get bogged down, especially on the base platforms. 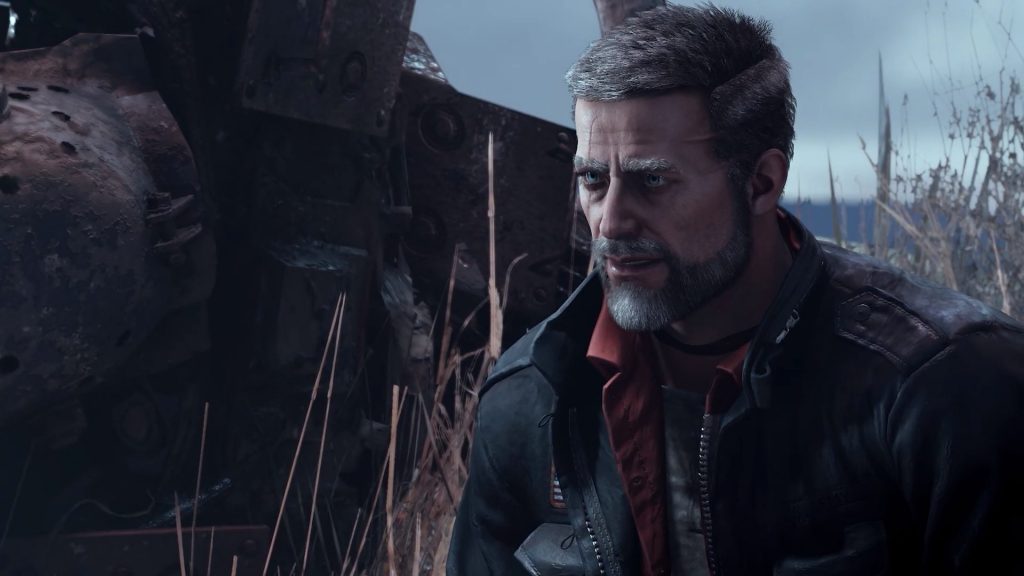 All in all, Youngblood is about iteration, not evolution. As we’re in the last year or two of the eighth-gen, developers are pushing up hard against the capabilities of both the Xbox One X and PS4 Pro. In games like Rage 2, this manifested in the “4K” consoles handing in a 1080p experience, albeit at 60 FPS.

With MachineGames’ latest, we’re instead seeing visual quality plateau (albeit at a high level), to ensure that high performance is maintained. Youngblood doesn’t exactly look better than earlier idTech 6 games, but it’s still a great-looking game in its own right. With Doom Eternal and idTech 7 debuting in a few months, we’re excited to see what MachineGames will do with the new engine. Will Wolfenstein III (if and when it comes) leverage the new tech? And if so, will it even be possible as a 60 FPS shooter on the Pro and Xbox One X or will we need to wait for 9th gen platforms to come out? I guess, we have to wait and see.