Youngblood is a decent stopgap before we get to the true sequel to The New Colossus.

If you go into Wolfenstein: Youngblood expecting another bonkers narrative rollercoaster full of cinematic and stylish cutscenes that are constantly punctuated by William BJ Blazkowicz’s poetic, brooding monologues, this latest instalment in MachineGames’ take on the franchise might leave you a bit disappointed. Youngblood is very clearly a side-story, a half-step forward to placate fans with more Wolfenstein while MachineGames works on the true sequel to The New Colossus.

But if that’s all you’re looking for as you boot up the game, if all you want it some more bombastic Nazi-slaying action, Youngblood will surely scratch that itch. It changes a lot, adding several new mechanics and layers to the structure that this series has been following over the last five years, and it’s fair to say that not every single one of those changes works as well as the developers would have been hoping for- but by the time the credits roll, you’ll be satisfied with the game as a stopgap before Terror Billy’s glorious return, which – hopefully – is not too far away.

"Youngblood changes a lot, adding several new mechanics and layers to the structure that this series has been following over the last five years, and it’s fair to say that not every single one of those changes works as well as the developers would have been hoping for- but by the time the credits roll, you’ll be satisfied with the game as a stopgap before Terror Billy’s glorious return."

As Youngblood begins in 1980, BJ has mysteriously gone MIA, and his twin daughters Jess and Soph, with the help of Grace’s daughter Abby, are able to pinpoint his location as somewhere in Paris, which is still occupied by Nazi forces. We play as one of the two twins, with the other being controller by either another player or the computer, and this switch in protagonists mostly works. Jess and Soph are goofy, endearing characters who mirror the game’s more cavalier and light-hearted approach perfectly, and stepping into the shoes of someone much less experienced in the art of Nazi-killing is certainly an interesting change. They don’t have much depth as characters, and they don’t really have any arcs with resolutions. As such, they don’t compare to BJ, of course, who has proven to be an enigmatic and complex leading man over the course of three games so far- but Jess and Soph are still serviceable leading ladies for what is clearly an interlogue between two major chapters of the series.

Youngblood is also much less narrative-focused than its predecessors. With a much more open-ended structure (more on this in a bit), the bulk of the story happens in the beginning and ending of the game, with not much else of consequence going on between the two bookends. The lack of focus on storytelling can be a bit disappointing- I certainly missed the insane twists and turns Wolfenstein games have so often taken under MachineGames’ care, and there was certainly something missing without a colourful and magnetic cast of characters. But with that said, there’s enough here to keep series fans satisfied. The game drops interesting and vague references to events that took place between The New Colossus and Youngblood without ever going into too much detail about them, while certain events in the story here also hint at some interesting directions Wolfenstein 3 could be headed in.

Youngblood really shines in its level design, where the influence of co-developers Arkane Studios – of Dishonored and Prey fame – is immediately apparent. Rather than being a linear, point A to point B fare like previous games in the series, Youngblood lets you lose in the city of Paris after an introductory mission. From here, you’re free to tackle missions in whichever order you please, while also getting more side-missions from French Resistance members in the city’s catacombs, which serve as your hub and base of operations. 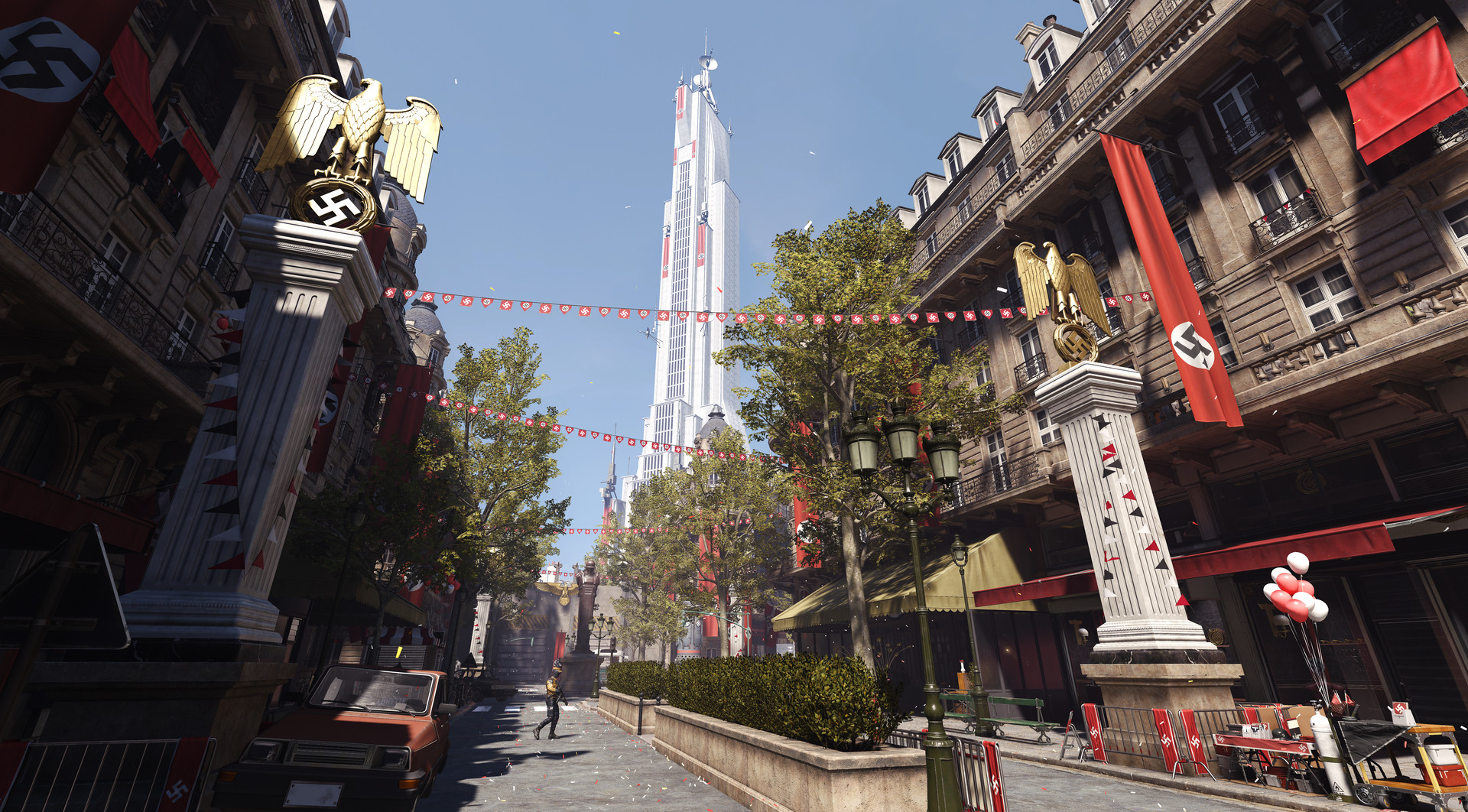 "Youngblood really shines in its level design, where the influence of co-developers Arkane Studios – of Dishonored and Prey fame – is immediately apparent."

Paris is divided into multiple open-ended sections, rather than a large seamless map, and though this isn’t an open world game by any means, each area of the city is still pretty big, especially by Wolfenstein standards. You’re also encouraged to explore and find alternate paths throughout the city’s vertical landscapes. Equipped with a double jump ability right from the get-go Youngblood encourages you to go into alleys, jump through windows into apartments, and trudge along balconies to avoid higher-level enemies. There’s no single path for you to take as you make your way through the city, and the multi-layered and vertical design of the environments makes things a lot more engaging. Don’t get me wrong, Paris is no Dunwall or Karnaca- but it’s a refreshing new direction for the series.

Thanks to the game’s much more open-ended structure, you’re also able to tackle missions in any order, or even skip most of the side missions entirely if you wish. Tackling side missions might help you carve hidden paths into areas that you need to head into for the main missions, making things easier for you in the long run, but there’s nothing stopping you from going right ahead and tackling the main missions as soon as you’re let loose in Paris.

Well, almost nothing. Youngblood also throws progression and RPG mechanics into the mix, and it’s here that the game falters somewhat. Levelling up your character allows you to purchase more abilities, like being able to dual wield weapons, or use heavy weapons dropped by enemies, or increasing your health and armour stats, while you can also spend Silver – the in-game currency that you earn by exploring and completing missions – to upgrade your weapons. And while progression isn’t too much of a nuisance, especially since you level up and earn Ability Points pretty quickly, there’s one byproduct of all this that does hurt the game a bit.

"Youngblood also throws progression and RPG mechanics into the mix, and it’s here that the game falters somewhat."

That byproduct is that enemies now also have levels and health bars for you to keep in mind, which can really dampen the pace of the action at times. Wolfenstein games have always been about ripping and tearing through hordes of enemies with reckless abandon, but Youngblood often slows down the action by pitting you against enemies that might be higher-level than you and, as such, end up becoming bullet sponges.

Even certain enemies that aren’t higher-level come with armour protecting their health bars, and chipping away at that armour before you can actually deal damage to them achieves the same effect of slowing down the action. Enemies in the game also scale according to your level, so it’s not like upgrading your character can help curb those issues as you progress forward. Don’t get me wrong, shooting is still a lot of fun – the shotgun, as always, is particularly amazing – but the game lacks the visceral, frenetic carnage that this series has come to be known for.

More importantly, missions in the game now also come with recommended level requirements. There’s nothing stopping you from ignoring those requirements and just tackling these missions anyway, but that is usually very ill-advised. All this does, then, is end up feeling like level-gating of missions to artificially increase the game’s length, in order to get you to engage with the game’s side missions and exploration aspects a bit more. 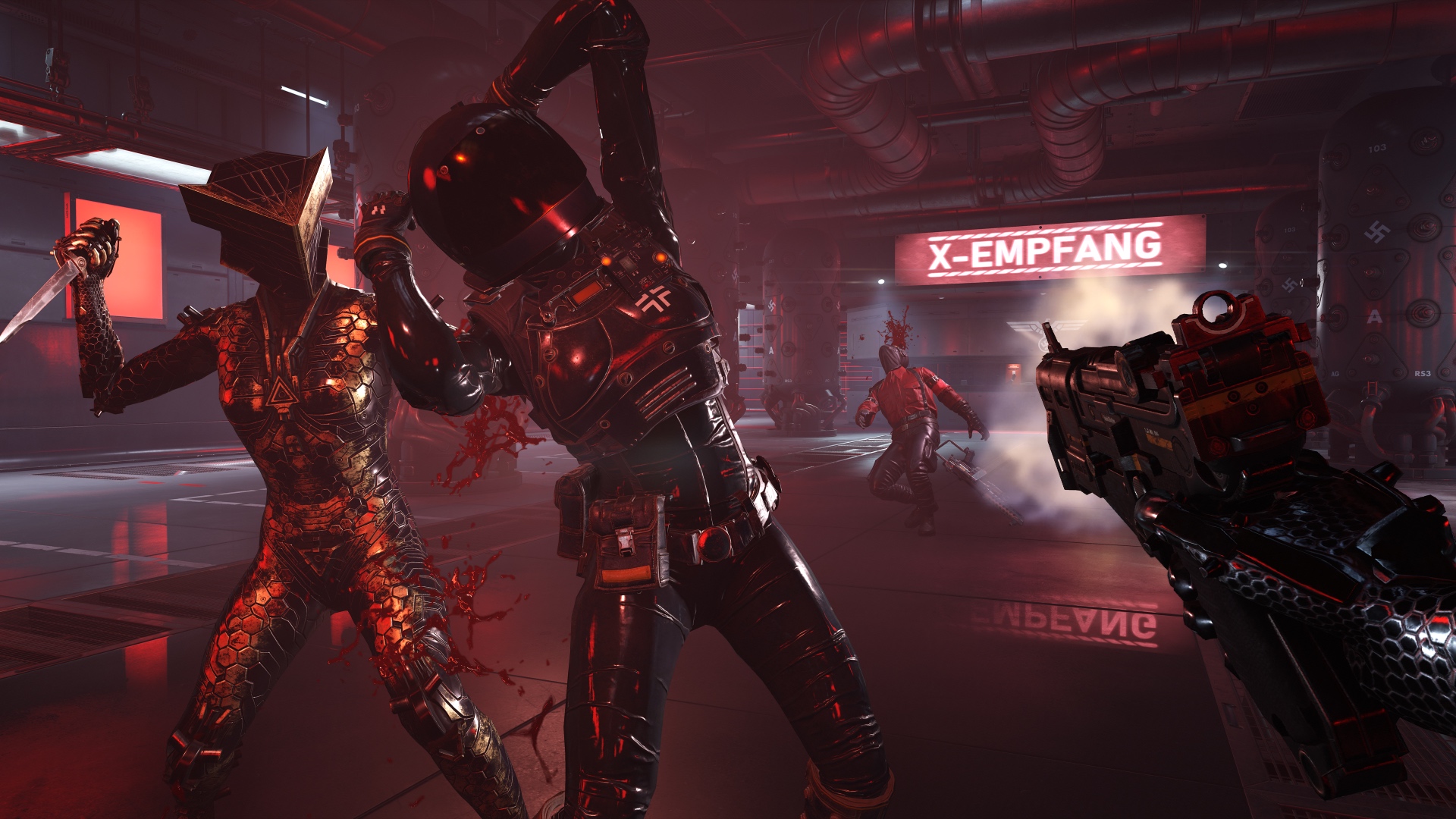 "Wolfenstein: Youngblood is very clearly not Wolfenstein 3, and you shouldn’t expect it to be. It’s a side-story before the final chapter in MachineGames Wolf saga, and for what it is, it’s a lot of fun."

The other big change Youngblood makes is its co-op element, which is something that actually works out pretty well. Mechanics like its Pep signals – which are essentially emotes, but with tangible gameplay buffs – and the higher count of enemies that you have to contend with leverage the game’s co-op nature very well, while the lack of storytelling and its completely open-ended nature also bolsters that aspect of the experience a great deal. It’s clear that this is a game best played with a friend- but if you’re looking to go through the entire thing solo, that’s a viable option as well, since the AI controlling the second sister is more than competent.

Wolfenstein: Youngblood is very clearly not Wolfenstein 3, and you shouldn’t expect it to be. It’s a side-story before the final chapter in MachineGames Wolf saga, and for what it is, it’s a lot of fun. It doesn’t succeed at everything it does – the RPG mechanics in particular feel tacked on and needless – but its open-ended nature and excellent level design still make it a really good Nazi-slaying time.

RPG mechanics feel unnecessarily tacked on; Lacks the excellent characters and riveting narratives of its predecessors.

Final Verdict:
GOOD
Wolfenstein: Youngblood is very clearly not Wolfenstein 3, and you shouldn't expect it to be. It's a side-story before the final chapter in MachineGames Wolf saga, and for what it is, it's a lot of fun. It doesn't succeed at everything it does – the RPG mechanics in particular feel tacked on and needless – but its open-ended nature and excellent level design still make it a really good Nazi-slaying time.
A copy of this game was purchased by author for review purposes. Click here to know more about our Reviews Policy.