World Of Final Fantasy Review – A Celebration Of A Great Series

Final Fantasy fans will surely get the most out of it, but we have no problem telling anybody that World of Final Fantasy is a good time.

You have to admire the worlds and adventures crafted by Square Enix and brought to life under the Final Fantasy umbrella. We’ve had missteps like the Final Fantasy 13 saga, but we’ve also had touchstones of gaming culture courtesy of this series, like the iconic theme, Chocobos, Kefka’s laugh and Aeris’s untimely death (which we STILL refuse to accept!)

World of Final Fantasy ultimately is a giant love letter to the massive legacy of this series and all that spun off from it, but thankfully Square wasn’t content to rest of their laurels. While there are a legion of callbacks and fan favourite characters within, it was smartly all built on top of a classically inspired, solid gameplay foundation.

We’re introduced to the brother-sister pair of Lann and Reynn, who wake up to find a totally abandoned town, save for one mysterious woman calling herself Enna Kros. She opens the world of Grymoire, a place the twins have apparently forgotten all about yet were big players within. The Mirages of Grymoire were at their beck and call before, monsters that roam throughout that world and can be captured by a tamer. Set on the path to recovering their memory by retrieving their Mirages, the world of Grymoire is theirs to explore. Along the path they’ll awaken cameos of famous characters from the series whom I won’t spoil, champions that unlock their own side stories you can follow.

"World of Final Fantasy didn’t give me much to latch onto with the unlikable characters and cliche story, however the artistic design of the world itself is simply gorgeous."

In typical fashion for a Square RPG, the narrative gets rather dense really quickly. Grymoire, Mirages, Imprisming, Lilikin, there were certainly times I felt I needed a quick glossary to keep up. The one saving grace is that the writing gives the player many kinds of winks that it’s not trying to take itself super seriously and you probably shouldn’t either. There were a few monster descriptions such as a two headed lizard that rap-battles itself and scenes where Reynn scolds her brother for breaking the fourth wall that made me chuckle, and brings the tone back to something lighter and more fun.

They could have done more to balance the tone however, in many places it went a little too far in the other direction and was too simple. Unfortunately the main trio of the twins and the obligatory cute sidekick character often got on my nerves and was the weaker part of the presentation.

World of Final Fantasy didn’t give me much to latch onto with the unlikable characters and cliche story, however the artistic design of the world itself is simply gorgeous. Colours and animations, though occasionally over the top, are quite fluid. The two almost conflicting art-styles on display are meshed together really well, and blend with the game mechanics I’ll touch on in a moment. One side is very reminiscent of the Kingdom Hearts games, while the chibi style that dominates the game is super adorable. Importantly though, they don’t clash. It’s not strange to see the Kingdom Hearts proportioned “Jiants” standing beside the super deformed “Lilikin”. 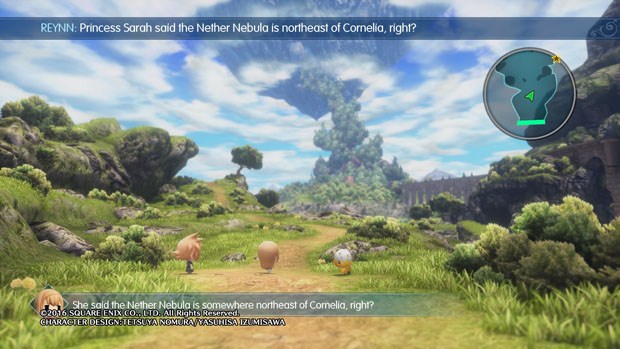 "The battles take on a fusion of classic Final Fantasy, complete with a modernized active time battle system, and Shin Megami Tensei with the Mirage capturing."

The battles take on a fusion of classic Final Fantasy, complete with a modernized active time battle system, and Shin Megami Tensei with the Mirage capturing. All participants of a battle have to wait for their turn to come up on the universal ATB bar, with images overlaid on the side, a little like Digimon Story, so you can see at a glance what moves are coming up and build your strategy. As a modern concession, the bars progress will freeze upon reaching one of your moves. While classically trained players can change the option for constant motion, I appreciated the additional time.

The additional wrinkle of the Mirages and the stacking system is the most interesting addition to RPG combat that I’ve seen in a long time. Mirages take the forms of a wide variety of monsters and figures from throughout the Final Fantasy mythos, and during your battles with wild ones, you can attempt to capture, or imprison them for your personal use. Taking more inspiration from Shin Megami Tensei than Pokemon, each mirage has a unique condition that must be met before you’ll have the chance.

Some just need to be hit. Some need to be hit with a specific element. Some need to be deliberately healed by you. The conditions add to the tension of the situation, as the actual act of capturing them behaves like Pokemon, where you need to get them weak so they won’t break free. You’re giving up a precious turn by trying to catch a Mirage, who will likely get to act next. Delay too long and the opportunity will be gone, but if you aren’t careful you’ll knock out the monster and lose it anyway. 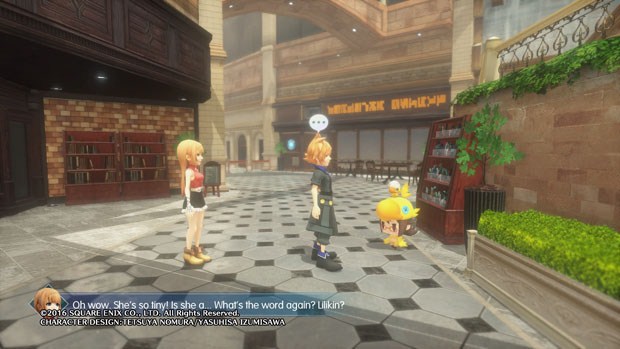 "Taking more inspiration from Shin Megami Tensei than Pokemon, each mirage has a unique condition that must be met before you’ll have the chance."

Once you’ve wrangled a few Mirages, you’ll become best friends with the game’s Stack system. Instead of just having a hoard of monsters at your command as you enter battle, you’ll be positioned in a humorous totem pole. Mirages come in Small, Medium and Large sizes, which dictate where they can sit within a stack, and the twins can swap freely between the large Jiant form and the medium Lilikin form. You’ll form these stacks pre-battle within the menu, able to create a set for both sizes for each twin. As a tower you’ll act as a single unit, combining stats and creating new powers, but also sharing weakness too.

It expands the gameplay options a ton when you need to consider not just how powerful you are together, but whether these mirages have synergy with each other and how many weaknesses they open you up to. Within battle you can decide to unstack, which divides your strength but opens up each of the three from the stack to act individually. Whether to divide and conquer or stand together becomes yet another strategic decision, which makes combat feel all the more deep.

World of Final Fantasy doesn’t just satisfy itself with bringing up a bunch of old faces and going “Hey remember that thing Tifa did?!”. The world and callbacks are easier to invest in than the characters you actually play as, but if you barely know your Fire from your Firaga and think Cloud Strife is a nimbus who lost his job, you’ll still get a rock solid RPG.

The presentation is gorgeous all around, bringing together two distinct art styles in a cohesive way. Takes the tried and true mechanics of the classic Final Fantasy titles, modernizes them, and then goes the extra mile with the intricate Mirage Capturing and Stacking systems. Doesn’t take itself super seriously, including some dumb fun and jokes.

The main characters we follow are fairly unlikable, if not annoying. Is it even fair to consider convoluted plot as a negative to a Square Enix RPG anymore?

Finally, a game that celebrates a storied series like Final Fantasy. They leveraged both their own classic mechanics and characters to elevate a solid core, and then made it even better by mixing in some elements from other genres. Final Fantasy fans will surely get the most out of it, but I have no problem telling anybody that World of Final Fantasy is a good time.

A copy of this game was provided by developer/publisher for review purposes. Click here to know more about our Reviews Policy.
Tagged With: PS Vita, ps4, Square Enix, World of Final Fantasy