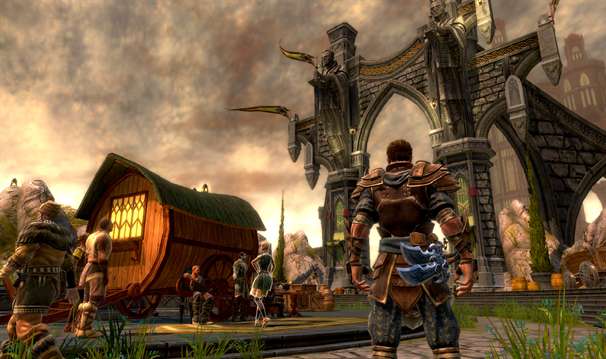 Kingdoms of Amalur: Reckoning lead designer Ian Frazier says it was easier to develop for the Xbox 360 than it was to develop for the PS3. He also said that while it’d be interesting to see what the next generation has in store for developers, developing games on “mature and stable” consoles is much more comfortable work.

“As a player, I’d love another generation of Xbox,” he said at a preview event (via OXM).

“I feel like we’ve been pushing this technology for a really long time, and I’d love to jump to the next level, the Xbox 720 or whatever it ends up being.

“As a developer? It’s really nice having a stabilised platform. Especially with the Xbox, it’s so solidified, people know it so well – it’s just really, really easy to develop for at this point.

“Our team were coming from a PC background, we had Settlers of Cataan on Xbox Live Arcade but that’s it, that’s the only previous console experience we had. Going to Sony platforms was a little bit tricky, Xbox was significantly easier, but across the board it was really nice going to platforms that were mature and stabilised.

He commented on what the next generation games might hold for us- “Honestly I’m really curious to see. It’s something we don’t get a lot of information about on the back channels. I get little bits and pieces of information now and then. My best guess is that it won’t be completely crazy new things, but mostly a graphical upgrade. We’ll see.”

When asked if Big Huge Games had to make any compromises for the PC version to develop the game on the consoles, he said: “One of the things we

wanted to do really late was go to Direct X 11, which wasn’t possible in the timeframe we had. But as far as the platform goes – not really.

“We could have done things with motion controls and whatnot, but we didn’t really want to in Reckoning. Voice control similarly didn’t really fit – we don’t have squads and it’s not really a militaristic kind of game, or even a party-based game. So those things, not really.

“If you gave me the holodeck I’d love to work with that. But as far as things that are on the table tech-wise? Nah, just better graphical quality would be nice, more memory would have been nice. I wish every Xbox came with a hard drive, that would make things much easier. Not being able to bank on a hard drive makes everything a whole lot harder, tech-wise.”

Kingdoms of Amalur: Reckoning is now out in the US and will be releasing in Europe on February 10. Stay tuned for more updates and our official review.