Not a bad lineup, all said and done.

While Microsoft is focusing big time on their Game Pass subscription service, we can’t forget about good old Xbox Live Gold. So much is talked about in regards to other subscription services, it can be weirdly forgotten that Gold is still a thing, and it’s still giving out free games- and today we learned what we can expect for September.

It’s quite the mishmash of game types, as for the Xbox One specific titles we have Hitman, the episodic 2016 title in the franchise that relaunched it to modern audiences, and We Were Here, an indie puzzler game that’s good for a brain teaser. Hitman will be available the entire month, and We Were Here will be available September 15th-October 15th.

On the Xbox 360 side, we get to fight off giant monsters invading in Earth Defense Force 2050, and then throw fists with Tekken Tag Tournament 2, the second tag-based game in the popular fighting series. Earth Defense Force 2050 will be available from September 1st-15th, while Tekken Tag Tournament 2 will be available September 16th-30th. Both will be also be playable on all Xbox One devices, as well as Xbox 360. 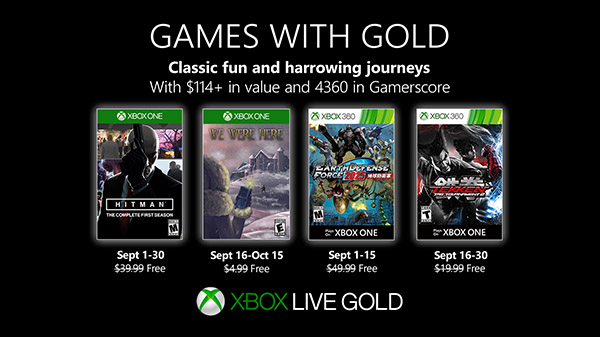