Xbox One Sales At 20 Million, PS4 Nearly 40 Million, According To EEDAR Study

The console wars are fiercer than ever this generation, but you wouldn’t know it- the battlefield is dominated entirely by one monolithic player in each arena (the PS4 for consoles, and the 3DS for handhelds), so much so that the competition often shies away from sharing sales numbers (Microsoft and Sony no longer report sales numbers for the Xbox One and PS Vita respectively).

However, a new EEDAR study has shed light on just where the gaming market stands at as of the end of 2015, and it’s an interesting picture to say the least. The study more or less confirms numbers we have all long since guessed, or deduced from varying sources- and it shows us a gaming market that looks a lot like the PS2 era did:

Note that all sales figures here are estimated from the graph (see below), and also as of December 31, 2015- so they may be at least a few months too old right now.

The study also seems to hint that the PS3 now has a very slight lead over the Xbox 360 worldwide, but that both the Xbox 360 and PS3 are still straggling behind the Wii, in spite of the latter’s discontinuation a while back.

It’s not a healthy looking market, that’s for sure- unlike last generation, when every single system on the market was a veritable success in every sense of the word, it seems like only one or two systems will stick the landing by the end of this generation. It’s a frightening picture, and it seems to indicate that the console game market needs a shake-up- and fast. 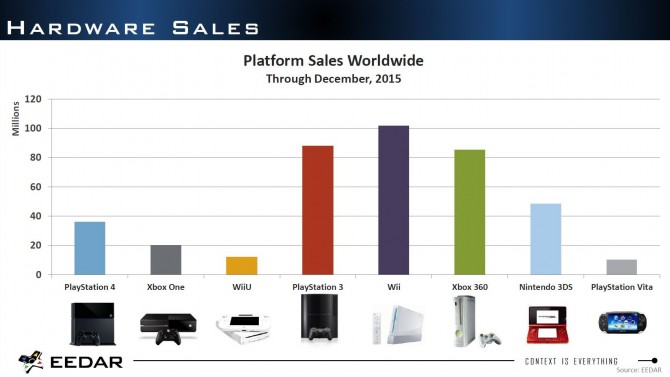