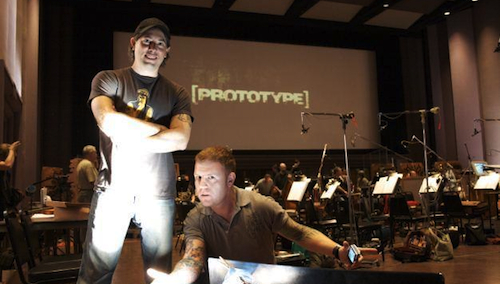 Ubisoft’s ZombiU is set to bring zombie survival horror to the Wii U, with the traumatic events that only having to shake a zombie off a few inches from your face can provide.

Thanks to Cris Velasco though, it just got even better, for he’ll be composing the music for the game, promising an original and frightening score.

Don’t know the guy? Oh, he just worked on a couple of games you might’ve heard of. Mass Effect 3, Borderlands 1 and 2, all three God of War games (for which he was nominated for and won a BAFTA award in “Best Original Score), Darksiders, Prototype, that kind of stuff. Nothing too big.

What’s interesting is just how Velasco is gonna go about composing the sound-track. He’ll be employing detuned toys and instruments, carnival organs, distorted guitars, contrasted by piano and string quintet compositions. Imagine a demonic carnival meets Schubert meets a horrific nightmare of no escape that only the zombie apocalypse could provide, and you’ll get a fair idea.

Given his memorable music on Mass Effect 3, the most famous track which would become the basis for this gem, we can’t wait to see what Velasco delivers when ZombiU releases exclusively for the Wii U on November 13th.