Video games have grown beyond recognition over the years, and as technology has continues to evolve and the creators in the medium have continued to mature, games and franchises have transformed in some really interesting ways. More often than not, when games or franchises do go through such changes, their protagonists and main characters end up being the faces of those changes- either visually, or how they sound, or how they behave, or all of the above. Without further ado, let’s get started. 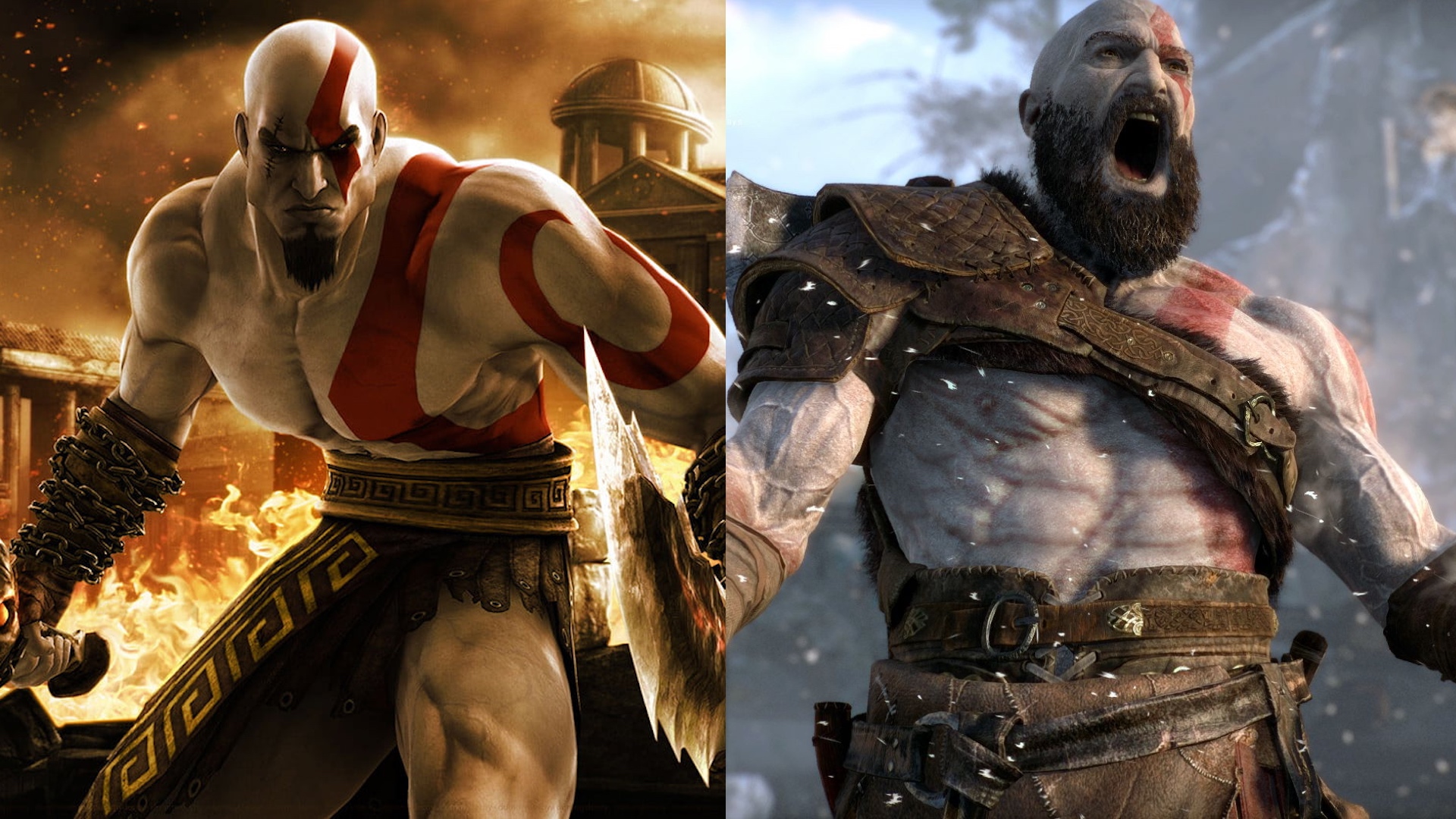 God of War might be the youngest franchise mentioned in this feature, but there’s no ignoring how radical of an evolution it as gone through- and series protagonist Kratos represents that evolution best of all. One of the greatest antiheroes of all time, Kratos started out as a conflicted and merciless warrior, and over time, developed further and further into a deplorable person we all loved to hate- before turning things around and reappearing as a (still) conflicted and (still) merciless father who had grown weary with the violence and conflicts of his past.

That weariness was reflected in Kratos’ character model as well. Defined throughout six Greek games by his ripped body, his ash-white skin, and his scarred-over body, and his shouting, Kratos’ body began showing all the wear and tear in God of War (2018). The ash sticking to his skin was less consistently visible and became more patchy, his scars became a lot more detailed (which is something that has actually been true for each successive entry), and of course, his bushy beard gave him just the sort of look the story demanded. The fact that for the first time in series history, Kratos was motion captured (and performed this time by the impeccable Chris Judge) lent his character even greater depth.

Though only fifteen years separate the first and seventh God of War games (both named just God of War), Kratos’ character model has gone through a lot of changes. In the Greek era, each new game added even further detail to him, making him more defined and detailed, while with God of War (2018), Sony Santa Monica not only added to that detail, they added entirely new flourishes to the character as well. 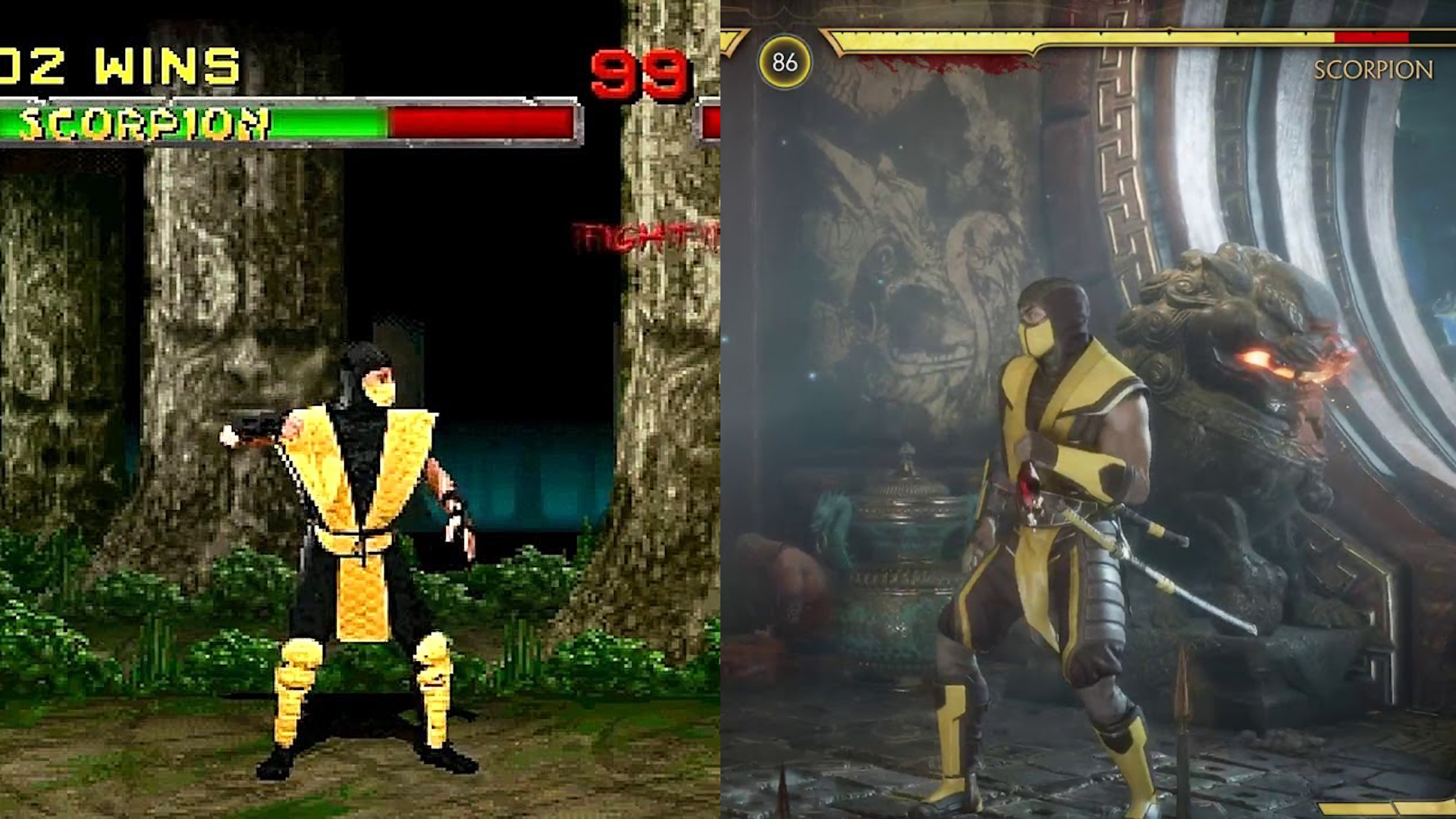 Given the long and illustrious history of Mortal Kombat as a franchise – and how many games it has spawned over the years (to say nothing of other tie-in media) – it goes without saying that every character in the series has gone through some drastic changes over the years- but the one we’re focusing on here is, of course, Scorpion, who is the face of Mortal Kombat.

In many ways, the core aspects of Scorpion have remain unchanged from when we first saw him in 1992 to when we last saw him in 2019. The yellow clothing and the mask on his face have become instantly recognizable and iconic over the years, so it’s good that that core aspect of the character’s design has remained largely unchanged. That said, NetherRealm (and Midway before them) have added tons of new details to Scorpion to add to his design with new entries over the years.

From his two stinger swords and the exoskeletal patterns on his mask we saw in Mortal Kombat (2011) to the alterations made to his roped spear and belt in Deadly Alliance, from the insignia that he started wearing to represent his clan to in Deception to the new details that have kept being added to his look as technology has allowed the developers to create progressively better character models- Scorpion is a character that has constantly looked better and better with each new Mortal Kombat game. 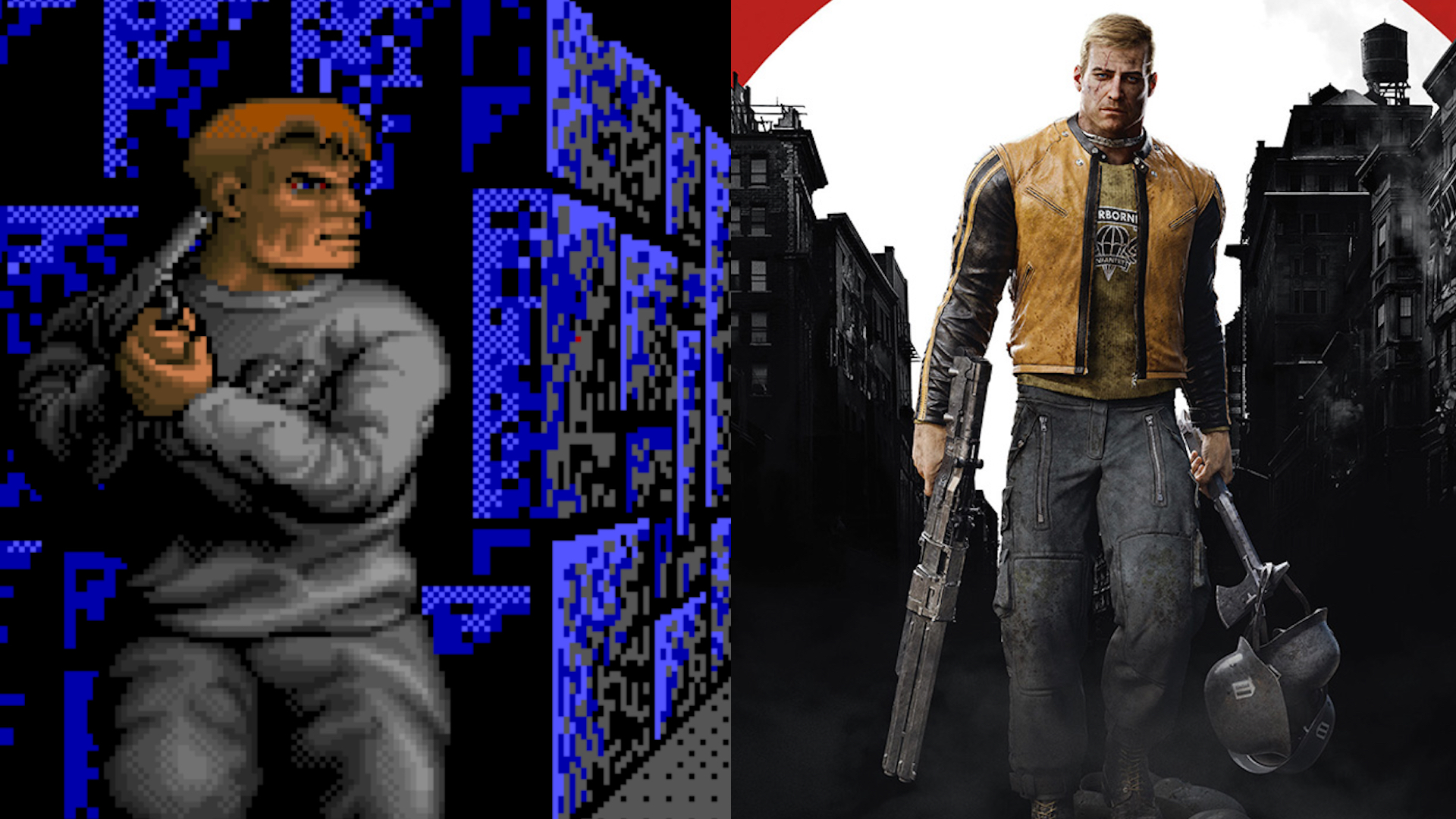 Story, storytelling, and characters have become a major part of Wolfenstein under MachineGames, and series protagonist William “BJ” Blazkowicz has carried the franchise on his shoulders with great aplomb since this transition- and though Wolfenstein was (until very recently) largely unconcerned with storytelling and with making BJ seem like an actual person rather than just a mindless Nazi-slaying machine, this is still a character who has gone through multiple changes over the years- to the point that he’s pretty much been portrayed as several completely different people in all but name across many instalments.

Starting as a voiceless jumble of pixels with a square jaw, blue eyes, and blonde hair in Wolf 3D in 1992, BJ was then portrayed as a much more generic looking gruff and rough-around-the-edges soldier in Return to Castle Wolfenstein, a look that Wolfenstein (2009) adopted as well. And while both those games lending BJ a little bit more personality that he displayed in Wolf 3D, it was still hard to call him- you know, an actual character.

It wasn’t until Wolfenstein: The New Order in 2014 that BJ Blazkowicz came into his own. Thanks to the excellent motion capture and voice acting of Brian Bloom, MachineGames were able to imbue the character with an incredible amount of depth and personality. Meanwhile, they also returned to a look much more similar to how BJ was portrayed in Wolf 3D, with lighter hair and eyes and a squarer face. 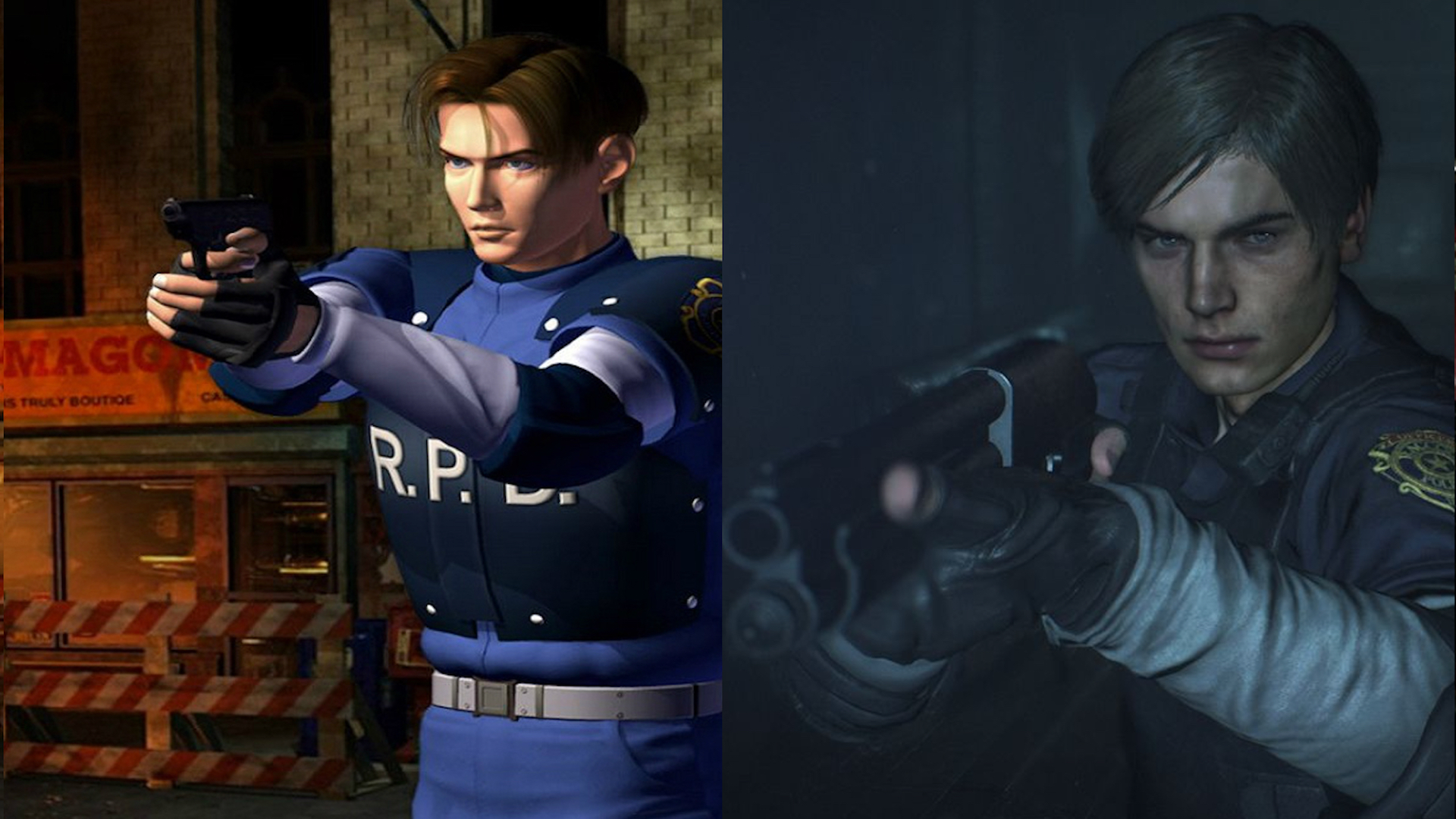 It’s hard to think of a Resident Evil character who didn’t completel a miraculous transformation who went from regular-looking person to buffed out action hero who can drop three roundhouse kick per seconds- and without the shadow of a doubt, former-rookie-cop-turned-bioweapon-slaying-super-agent Leon S. Kennedy is the poster boy of those kinds of transformations.

Leon has gone through many, many changes over the years. Making his first appearance in Resident Evil 2 as a regular guy, a rookie cop on the first day of his job, he then came back in 2005’s Resident Evil 4. This time though, instead of being lost and naive, he was cool, buffed out, and sarcastic, this time portrayed and voiced by Paul Mercier. Many other actors take up the Leon mantle for following games, with Matthew Mercer portraying him in the likes of Resident Evil 6 and Revelations 2, a Christian Lanz in Operation Raccoon City.

The last time we saw Leon was in last year’s Resident Evil 2, where Capcom returned the character back to his rookie, naive roots. Voiced this time by Nick Apostolides, and based on the likeness of model Eduard Badaluta, Leon’s character design was changed largely in terms of his costume, which was much more modern and practical than it was in the original game. Leon’s core identifying features have – for the most part – remained the same throughout the years, of course, but several variations and different kinds of portrayals over the years still paint a interesting picture of constant transitions for the character. There aren’t a lot of video game characters that are as beloved and have as much of an enduring legacy as Solid Snake does. What’s notable about Snake is that through years and years of changes and evolutions, his design has mostly remained consistent, with a number of instantly recognizable features (such as the bandana). The fact that he’s only been voiced y David Hayter (in English) and Akio Ōtsuka (in Japanese) every time he’s been in a mainline Metal Gear game has added to that consistency even further.

First appearing in Metal Gear on the MSX in 1987, Solid Snake truly stepped into the limelight with Metal Gear Solid on the PS1 in 1998, where creator Hideo Kojima and artist Yoji Shinkawa put the truly defining touches on the character’s design. As per Shinkawa, Snake’s look drew inspiration from various features, from the facial features of Christopher Walken to the physique of Jean-Claude Van Damme.

It was a look that was kept mostly intact for Metal Gear Solid 2: Sons of the Patriots– and then Snake saw his most drastic transformation a few years later in Metal Gear Solid 4: Guns of the Patriots, where he appeared as an aged, wrinkly, and wizened version of himself. Meanwhile, Snake has also made some other appearances in games outside of Metal Gear – most notably in Super Smash Bros – but his design in those games has mostly been consistent with his look in MGS1 and 2.