Alienation Interview: ‘Be Patient And You’ll Get A Great Game’

Community Manager of Housemarque, Tommaso De Benetti explains why their next game is their most ambitious yet.

Alienation was perhaps one of the brighter points from last week’s PlayStation Gamescom presentation. Housemarque, the developers behind critical hits like Dead Nation and Resogun announced their next game, Alienation. As the name suggests you will be fighting against extra-terrestrial creatures in what will literally be a blood bath. Alienation  seems to be a hybrid mix of Dead Nation’s gore and the extreme particle effects from Resogun.

GamingBolt got in touch with Community Manager of Housemarque, Tommaso De Benetti to know more about this upcoming PlayStation 4 exclusive. Check out his response below.

Rashid Sayed: Alienation seems like a return to roots for Housemarque given its basic similarities to Dead Nation. What was the inspiration behind this direction?

Tommaso De Benetti: We definitely looked at Dead Nation and what people liked about that, but we thought that in a sci-fi setting we would have many more possibilities to try out new stuff. After all technology is almost like magic, right?

Rashid Sayed: Just like last year’s Resogun, you guys have selected a really cool name for the title. Alienation sounds catchy. Who is responsible for naming your games?

Tommaso De Benetti: Well thanks. For a long time we referred to it internally as Alien Nation, in two words, but there were a couple of concerns regarding that. First, Alienation is a new IP. We didn’t want to make it a direct sequel to Dead Nation, it’s more of a “spiritual successor”. It shares some elements but it’s its own game, with different mechanics, etc. There were also copyright concerns, because “Alien Nation” has been used before both as a movie title and tv series title. I’m pretty sure it’s been used also by the recording industry, so it wasn’t worth the effort. Right now I think it both reminds of its inspiration and suggests something new. 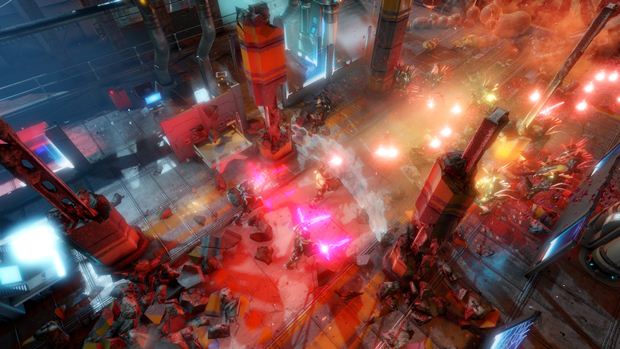 "Players will be able to collect resources and use them to unlock abilities and craft more powerful weapons. Also, the fact that now we have different classes will make co-op play very much about team work."

Rashid Sayed: So let us talk about some of the gameplay mechanics. Alienation is all about survival and collecting resources to fight off this massive Alien invasion. Is it only about shooting and smashing Aliens or is there going to be some tactical element involved?

Tommaso De Benetti: Shooting stuff is just one part of it. Players will be able to collect resources and use them to unlock abilities and craft more powerful weapons. Also, the fact that now we have different classes will make co-op play very much about team work.

Rashid Sayed: Dead Nation was a pretty gory game. But in Alienation there is not only blood but literally a river of blood. Why did you guys step up the violence level compared to Dead Nation?

Tommaso De Benetti: We’re still evaluating that. We don’t want to make it realistic, as realistic violence makes people generally uncomfortable. We want to make it over the top, so everybody understand that it’s just for fun. We want people to look at the screen and start laughing.

Rashid Sayed: The game seems tailor made for co-operative mode. How many players can join the party? 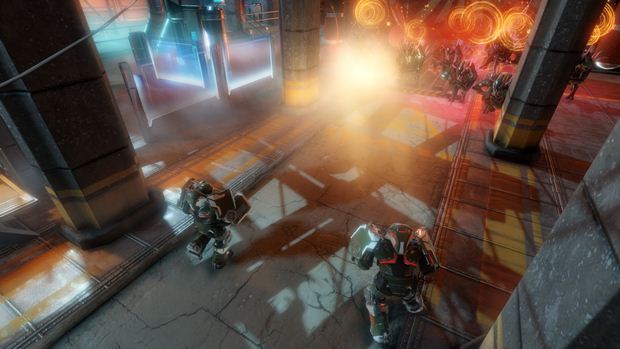 "Invasion is a mechanic we are not ready to discuss yet. Our bigger inspiration for that was the Dark Souls series. The team is testing various options including different factions rather than team members turning on each other, but we haven't settled for one yet."

Rashid Sayed: It seems that you can kill your party members or for that matter non-aliens. Will this scenario be present only in the offline campaign or will it be present in the online component? Can you let us know how it will work in the latter’s case?

Tommaso De Benetti: Invasion is a mechanic we are not ready to discuss yet. Our bigger inspiration for that was the Dark Souls series. The team is testing various options including different factions rather than team members turning on each other, but we haven’t settled for one yet. We’ll pick the one that grants the most fun for all involved – if anything, we want to avoid players trolling each other.

Rashid Sayed: What can you tell us about the customization and the skills system? And…how crazier are the weapons in Alienation?

Tommaso De Benetti: We’ll discuss skills at a later date, the classes are still being worked on. As for the weapons you’ll definitely see more than those shown in the trailer, including some pretty weird alien weapon. We developed a really badass particle technology just for that.

Rashid Sayed: Will Alienation run at 1080p and 60fps on the PlayStation 4?

Tommaso De Benetti: We have not reached the point in which we can discuss optimization, release is not imminent. There’s a lot of work to do. We’ll see.

Rashid Sayed: In our interview last year, you stated that Resogun was only using 50% CPU usage during gameplay. How is it looking like in the case of Alienation?

Tommaso De Benetti: I can’t answer it, as I said we’re not in the optimization phase. We’ll make it run smooth on a PS4 with all that stuff blowing up, I think that’s what matters.

Rashid Sayed: Are you using the PlayStation 4 DualShock 4’s touch pad to further enhance the gameplay?

Tommaso De Benetti: Not yet, but it’s something we are looking into. 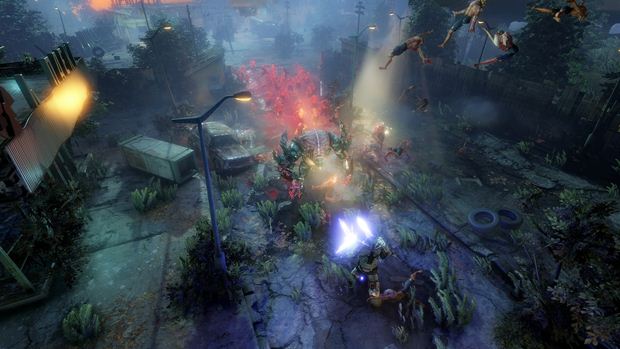 "We have a structure, we have a plan, and we have a bunch of things to test to find out which one grants the most fun. Now that we've been able to show it, we can fully concentrate in creating the content a game like this deserves."

Rashid Sayed: A year ago there was no such thing as a resolution and frame rate debate. But now every game is gauged on 1080p and 60fps. Does it make you comfortable that you are working on the machine that has allowed achieving those targets without any major development challenges?

Tommaso De Benetti: I would argue on the “without major development challenges” part. PS4 is powerful, but it really depends on what you have on screen. In Alienation we have destructible environments, a new tech for liquids, another one for rendering materials such as metals, plus a pretty insane particle system. I mean, if you’re running a puzzle game, sure, 1080p and 60fps are not a challenge.

Rashid Sayed: When are you guys launching and are there any plans to support post launch content?

Tommaso De Benetti: As the game gets more complete, we’ll be able to assess release date with more precision, but we’re looking at 2015 and probably not at Q1 2015. If the game gets a good response from the gamers I do not doubt that we will expand it, but it’s really too early to discuss that. We started working on the Resogun expansions after wrapping up the main game.

Rashid Sayed: Is there anything else you want to tell us about the game?

Tommaso De Benetti: Yes. As you can guess development is still in an early stage. We have a structure, we have a plan, and we have a bunch of things to test to find out which one grants the most fun. Now that we’ve been able to show it, we can fully concentrate in creating the content a game like this deserves. We might not be fast, but we usually do things properly. Be patient and you’ll get a great game.