And you wouldn’t believe how many for that week.

The popularity is just getting scary now, as Rovio has announced that Angry Birds hit 8 million downloads on Christmas Day itself. Using data from mobile analytics company Flurry which indicated that 17.4 million new Android and iOS devices were purchase on Christmas, the conclusion then follows that Angry Birds was downloaded on every second new smartphone/tablet.

But that’s not all. Not by a long shot. A handy infograph released by Rovio indicated that for that week – from December 22nd to 29th – Angry Birds had a whopping 30 million downloads. Is it any wonder that the company is able to ready it’s own production studio for an Angry Birds movie…in 3D? Check out the infograph below. 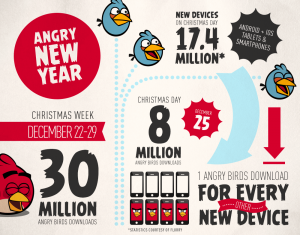 Angry Birds has seen nothing but success since releasing on the Apple App Store in 2009, going on to debut for multiple platforms including Android, PC and even Xbox 360. The title has seen more than 1 billion downloads and is considered one of the most mainstream games currently available.