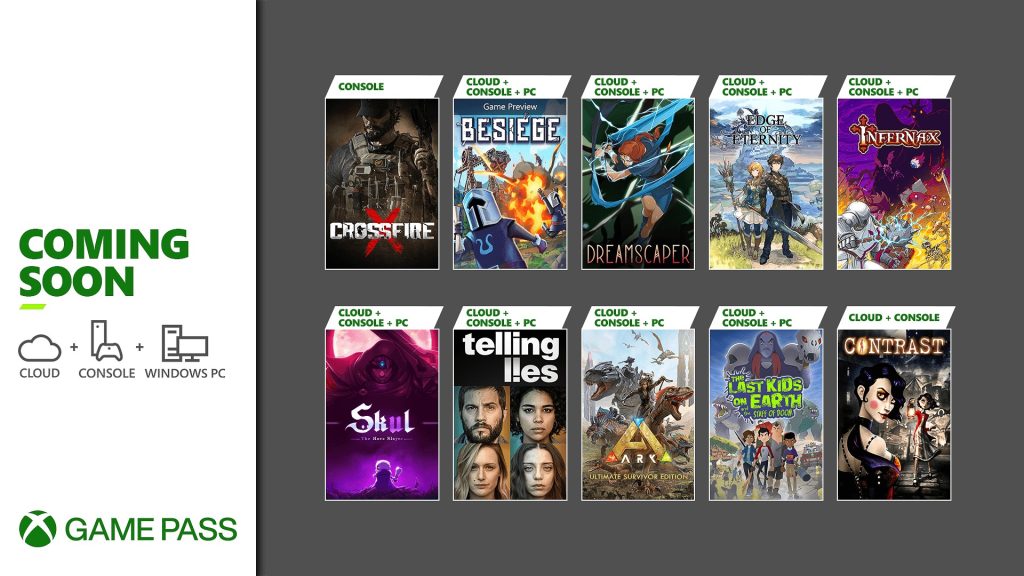 Microsoft has revealed the first wave of games coming to Xbox Game Pass and PC Game Pass in February. It kicks off on February 3rd with Compulsion Games’ Contrast, Afterburner Studios’ Dreamscaper and Sam Barlow’s Telling Lies. The latter two will be available for consoles and PC along with the cloud while Contrast is strictly for console and cloud players.

On February 10th, Smilegate’s CrossfireX joins the service for consoles. It includes Operation: Catalyst, one of two single-player Operations. To obtain the second Operation, one must purchase the Ultimate Pack which includes both Operations, the base game and the Season 1 Premium Battle Pass for $30.

Other titles available on the same day include Skul: The Hero Slayer, Edge of Eternity and The Last Kids on Earth and the Staff of Doom for cloud, consoles and PC. Besiege will also launch into Xbox Game Preview (aka early access).

Finally, on February 14th, ARK: Ultimate Survivor Edition – which includes the base game and the Scorched Earth, Extinction, Aberration and Genesis Part 1 and 2 expansions – will be available along with Infernax. They’ll be playable on PC, consoles and the cloud.

Check out the titles that will be leaving Game Pass on February 15th: