Ashes of the Singularity Review – Wartorn

A weak campaign and lack of long-lasting appeal detract from Ashes' superior tactics.

Oxide Games’ Ashes of the Singularity has been a long time coming and generated interest both for its immense scale and new engine Nitrous that would power the chaos. However, giant scale alone doesn’t make for a unique real time strategy experience, especially when you consider the many titles before – like Supreme Commander and Sins of a Solar Empire – that have been there and done that. The same goes for beautiful visuals and unique aesthetic – does Ashes look the part while standing out from the crowd? 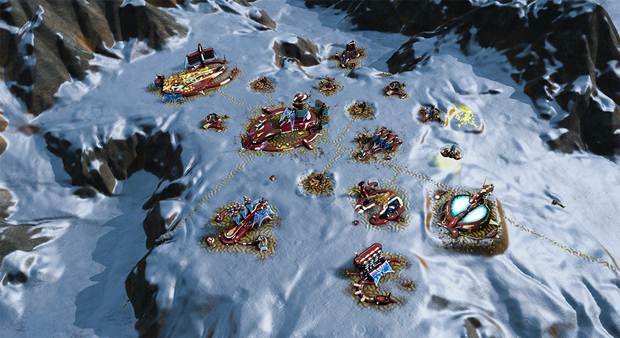 "Ashes of the Singularity may encourage you to build a vast army of units to overcome your enemy but it’s focus is on tactics and long-term strategy."

Those answers are unfortunately not provided by the Campaign labeled “Episode 1: Imminent Crisis”. It’s the future (naturally) and two factions are at war – Post-Human Coalition with its array of meat-bags and the Substrate, an intelligent machine race answering to a single AI. Both factions are fighting over Turinium, a valuable resource that is the key to building your vast swathes of units. Compared to memorable stories like Homeworld: Deserts of Kharak, the campaign in Ashes of the Singularity serves as little more than a soft entry-point into the genre’s mechanics and overall gameplay. This isn’t a bad thing, mind you, but it could have easily done with a lot more character and plot development over the barebones story-telling that is there.

Ashes of the Singularity may encourage you to build a vast army of units to overcome your enemy but it’s focus is on tactics and long-term strategy. Numerous units can be grouped together into Meta-Units, armies that behave intelligently but allow for easy macro-management. Units will protect each other while advancing on the enemy and it only pushes for more precision-based movement as you manage various army comps. Along with the smaller, squishier units you have your Carriers and the Dreadnoughts. The Dreadnoughts are special because they can attain Veterancy, which means they can be upgraded and gain special abilities. These allow it to either more effectively support your smaller units or put more hurt on vast numbers of enemies. Either way, it’s important to keep your Dreadnoughts alive and earning experience – they’re more potent in the long game.

While the lack of unit variety is a problem – and the similarity between units on both sides doesn’t really help (though Post-Humans have higher survivability as opposed to the Substrate’s faster mobility and recharging shields) – it does create a tighter focus on managing tactics with the units you do have. Arguments can be made for both sides and hopefully, there’s a larger variety of units planned for the future, just to allow strategy veterans more interesting ways to play. At least the tactical camera looks good and responds well to switching between various Meta-Units and managing various battles at once. 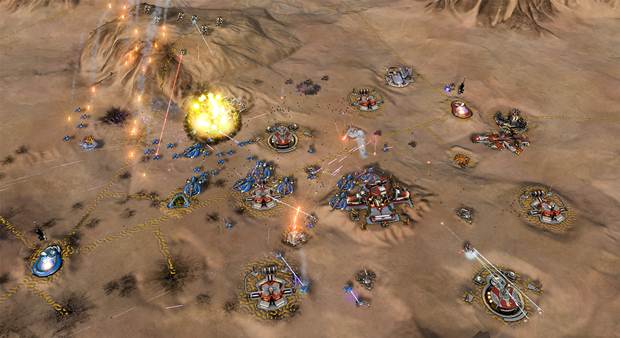 "Rolling through the battlefield with a thousand-strong (and growing) army, Ashes of the Singularity is the very embodiment of its large scale warfare."

Other ways Ashes emphasizes strategy is in being the right place, at the right time. With the ability to create counter-units, your army will be fighting over control nodes and harvesting Turinium as opposed to simply hanging back and waiting for the enemy to rush. That being said, while the greater emphasis on tactics can often result in pitched battles, a superior force will often win the day. When you have a control node on your side, it can be hard for the enemy to make a comeback even with more expensive options like air units (countered by anti-air measures), orbital lasers  and whatnot. Distilled down, Ashes of the Singularity can often feel simplistic the further you go along. It’s that simplicity which will wear on new players after a while as well.

The other issue is the game’s visuals. Rolling through the battlefield with a thousand-strong (and growing) army, Ashes of the Singularity is the very embodiment of its large scale warfare. Various units are uniquely designed and the smorgasbord of particle effects, explosives, Dreadnoughts battling and little tanks flitting around can be mesmerizing to watch at times. Except it’s outlined against a dreary environment that’s hardly memorable, much less appealing enough on its own. I know, I know, the focus is squarely on the battles here but it just doesn’t help the conflicts themselves if they take place in such generic locations (the snowy levels are admittedly decent looking but that’s it). At least performance-wise the game runs great. Despite running with an Intel Core i5-4440 and GeForce GTX 770, the massive conflicts fly by in beautiful fashion. Now if only they didn’t take place across as dreary a canvas as this.

Multiplayer is pretty strong in Ashes of the Singularity. The large-scale tactics opera plays out in grand fashion against real opponents and it’s here that controlling the nodes while carefully planning out your next move is vital. The stronger army may emerge the victor but it’s the smarter army that can trump it more often than not. Sitting back and weathering attacks is all well and good but you’re encouraged to explore the map, harness Turinium and fight the enemy whenever possible. It’s here that you actually feel like you’re fighting multiple battles on a progressing warfront as opposed to a few sketchy battles here and there. 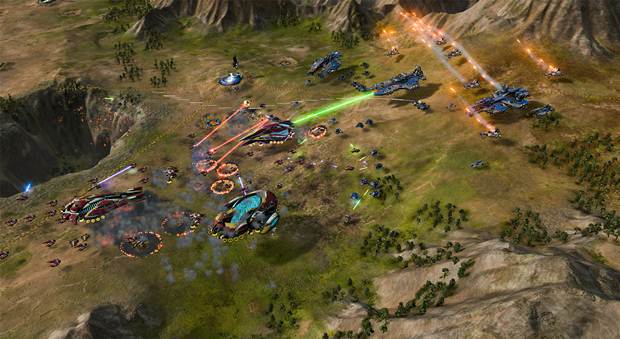 "And for all the hype about the visuals, despite strong performance, Ashes of the Singularity isn’t the most cutting edge experience on the market."

Ashes of the Singularity may look ambitious but it’s fairly simple and in some ways, fairly safe in its execution. The forgettable campaign serves as little more than a primer which strategy fans can safely skip and the lack of a compelling story doesn’t help matters. A tactics-filled battlefield and unique mechanics like Veterancy and Meta-Units can’t hide the relative similarity between the factions or the lack of unit variety. Multiplayer can be fun and is the real end-game here but it doesn’t nearly have the legs that other real-time strategy titles like Total War or Homeworld would.

And for all the hype about the visuals, despite strong performance, Ashes of the Singularity isn’t the most cutting edge experience on the market. Unless you’re a sucker for huge armies battling it out in grand fashion (and honestly, that’s a visual spectacle unto itself). All of this doesn’t make the game inherently bad – in fact, if you’re new to real time strategy games, it can be fun. But spending enough time with Ashes only drives home its lack of long-lasting appeal all the more. If you’re looking for an extensive skirmish or two with less emphasis on resource management and more on battling, then Ashes of the Singularity makes for a good distraction until, say, Total War: Warhammer or the next Supreme Commander rolls around.

Visual design is on point for units. Strong performance throughout, even as the action becomes crazy. Gameplay is refreshingly occupied with tactics rather than unit rushing. Dreadnought upgrading and Meta-Units add even more strategy. Multiplayer can be a fun past-time.

Campaign mode is sorely lacking in compelling narrative. Environments feel too drab. Similar units across both factions and lack of unit variety overall. Might not have long legs compared to similar better titles from the past.

Final Verdict:
GOOD
Ashes of the Singularity is truly a mixed bag of RTS goodies. Its strategy tactics and large scale battles draw you in but the lack of unit variety and drab campaign really keep from engaging you. Though a fun past-time for new players, strategy veterans may not find much lasting appeal.
A copy of this game was provided by Developer/Publisher/Distributor/PR Agency for review purposes. Click here to know more about our Reviews Policy.