Ubisoft and Assassin’s Creed have had a terrible history with leaks, and that trend has continued over the past year with the next game in the series, which is rumoured to be called Assassin’s Creed Ragnarok. It started when an easter egg image found in The Division 2 pointed to a Vikings setting for the next Assassin’s Creed game, and this was followed shortly afterward by a confirmation from Kotaku’s Jason Schreier that that was indeed the case. And since then, it’s been a deluge of leak after leak.

Now, we may possibly have another leak. A listing for Assassin’s Creed Ragnarok – Valhalla Edition allegedly popped up on Amazon Germany. Take this with a grain of salt though, because something like this could very easily have been faked- the listing, if it was indeed real, seems to have been taken down. All we’ve got is a screencap (via Metro), which you can view below.

Ubisoft confirmed not too long ago that they had two unannounced AAA releases planned for FY 2020-21, and it’s very likely that an Assassin’s Creed game is one of them. Whether or not they have chosen to push back its launch date in the wake of Watch Dogs: Legion’s delay remains to be seen though. 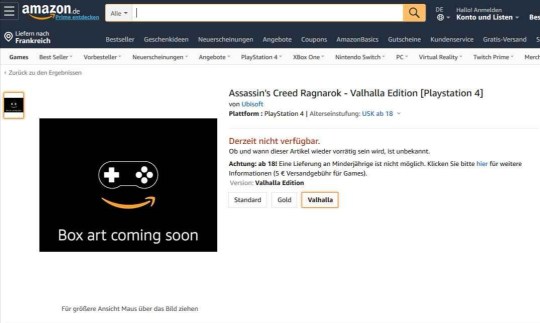