https://www.youtube.com/watch?v=FdeaPeZBuPk The latest Red Dead Redemption Undead Nightmare DLC TV commercial has gone live, confirming that there will be a Bigfoot making an appearance in the add-on... Read More

https://www.youtube.com/watch?v=g-gEvcY6iHI Bungie has released the trailer for their upcoming DLC pack for Halo: Reach, Noble Map Pack. The trailer gives you a taste of things on offer with the new... Read More

EA and Criterion Games today announced a demo for Need for Speed: Hot Pursuit which will be accessible from Oct 26 onwards for a limited period of time. Gamers can enjoy the brand new social netw... Read More

Another day, another PSP 2 rumour. Kotaku reports via their sources that Sony held a closed door meeting during the Tokyo Game Show this year with the purpose of showcasing the PSP2. According... Read More 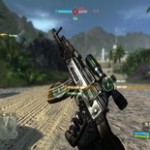 [HTML1] Another video from the closed BETA of CoD: Black Ops, this time showing us some sharpshooting action. Looks good, can't wait. Have a look and get excited too. Black Ops hits stores on N... Read More

Obsidian had announced that a special reward awaited all those who were foolhardy enough to complete Fallout: New Vegas with Hardcore Mode switched on, which makes your playthrough of the game twice... Read More

Update: This video is no longer available. A user has sent us a link to a new Call of Duty: Black Ops video which shows off some insane sniping skills. It's totally hectic out there and you won't be m... Read More

Microsoft's confirmed that the next Xbox Live Dashboard upgrade will be in place on October 26. The new dashboard features that this upgrade brings with it (8 in total) will be in place before No... Read More

Latest EDGE review scores are out

The latest edition of EDGE has reached subscribers and we have got all the review scores from the latest issue in one place. Vanquish got a solid 8, while Medal of Honor and Deadly Premonition bo... Read More

https://www.youtube.com/watch?v=w1mbaGAL4lo Some brand new Killzone 3 BETA footage has crept up and it  looks bloody awesome. However, since it's a BETA, some bugs have made their presence felt aswe... Read More

The PAL packshot for Gran Turismo 5 Signature Edition has been revealed by a German website. It looks really delicate and beautiful and compliments the game. Gran Turismo 5 won't be releasing ... Read More

OPM reviews COD: Black Ops, all scores in one place

OPM has published the first review of Call of Duty: Black Ops in their latest issue. They have decided to score the SP campaign, Tech and the MP aspects of the game separately. The Single Play... Read More