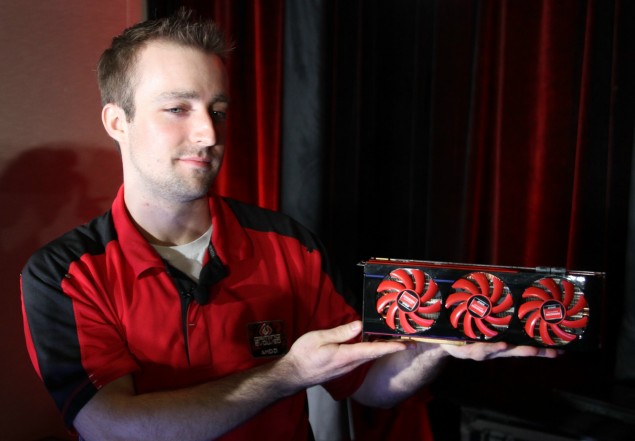 Battlefield 4 managed to drop jaws all across the show floor when it was unveiled at GDC this week. The Frostbite 3 engine churned out some spectacular visuals, as well as ratcheting up the level of destruction. There’s no arguing that the game was running on a high-end PC. DICE didn’t disclose the specifications of the PC, but AMD has spilled the beans today. Surprisingly, the game was running on the yet to be released AMD 7990 Dual-GPU.

The 7990 consists of two GPU cores based on the “Tahiti” core found on the 7970.  The card was dragged through out last year by AMD, which gave consent to AIB partners to launch graphics cards with their own designs. However, a reference design from AMD themselves never really materialized, until this week’s GDC. AMD has announced that they’ve gone back on the drawing board to deliver the most powerful graphic card on the planet. As you can see from the picture above, the card is a beast. It uses three 90 mm fans to cool a complex heatsink cooling the two GPUs which should gorge at almost any game that you throw at it.

“AMD and EA DICE are proud partners in gaming, with a recent history that includes the award-winning Battlefield 3 in 2011. That relationship continues today with the world’s first public demonstration of Battlefield 4, powered by the AMD Radeon HD 7990—the world’s fastest graphics card! Today’s unveiling not only demonstrates the commitment EA DICE makes to state-of-the-art PC graphics, it stands as further proof that the critically-acclaimed Graphics Core Next architecture in the AMD Radeon HD 7000 Series is the best choice for truly advanced PC games” read a statement issued by AMD.

“This is is only a preview series today, so I’m going to have to hold back some of the details for you guys, but this is not only the world’s fastest graphics card, this thing is whisper quiet with these three fans over here. This thing delivers massive performance and this is really the gamer’s dream card”  commented. Matt Skynner, general manager of AMD’s graphics business unit.”

AMD’s 7990 is going to lock shoulders with Nvidia’s recently released Titan graphic card. Expect the card to be priced around the bracket $800-$1000.